The S&P 500 made ALL-TIME NEW HIGHS today at 4249, taking out the May 10th highs of 4238.25!  Wait a second…. May 10th was only a month ago.  And before that, the large cap index made all-time new highs on May 7th, April 29th, April 28th and many times prior to that since the Fed brought rates to all time lows and began QE infinity.  So maybe it’s not that big of a deal that the S&P 500 made new all-time new highs.  After all, the Fed has told us many times that recent inflation is transitory (does that include new highs in asset prices?).  Did I mention that headline inflation released today was 5%!!??  But none of that matters.  The Fed says they will keep providing extraordinary monetary stimulus until actual data has shown that progress is being made towards its goals (primarily, maximizing employment).

Check out our S&P 500 trading guide

Not to get to far ahead of ourselves, but new week is the June FOMC meeting, at which time, they will release updated growth and inflation forecasts.  The question trader’ will be asking is: “Will the Fed talk about tapering?”.  At the ECB meeting today, Christine Lagarde told us that it was “premature” and “too soon” to discuss exiting the Pandemic Emergency Purchase Program (PEPP).  But what will the Fed do?  If they feel the same way as the ECB, the Fed induced rally in the S&P 500 should continue to put in new highs.  However, if they discuss tapering, the rally may come to an end as traders being pricing in a reduction of bond purchases (tapering). 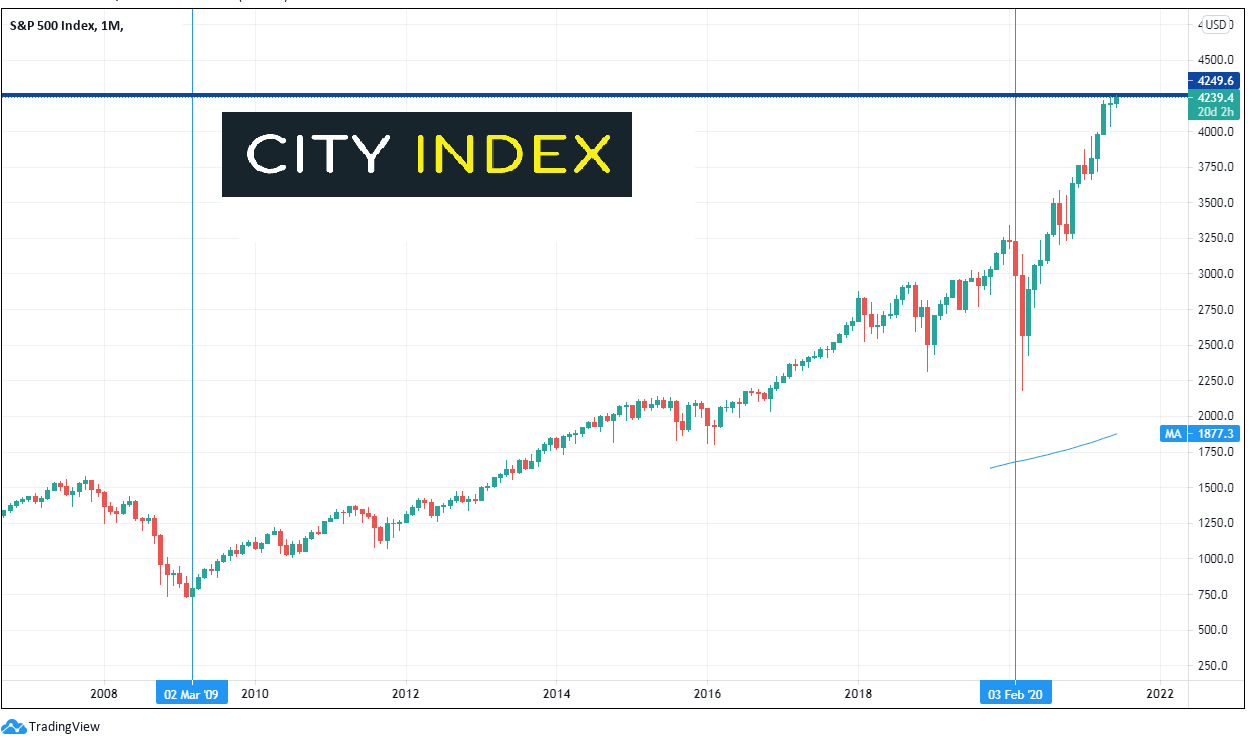 On a daily timeframe, price has been rising since March 2020 and a bearish wedge has been forming since September 2020.  Although the wedge was drawn differently previously (green line), even if SPX had a false break above that wedge, it traded back into it and is now testing the green trendline once again. 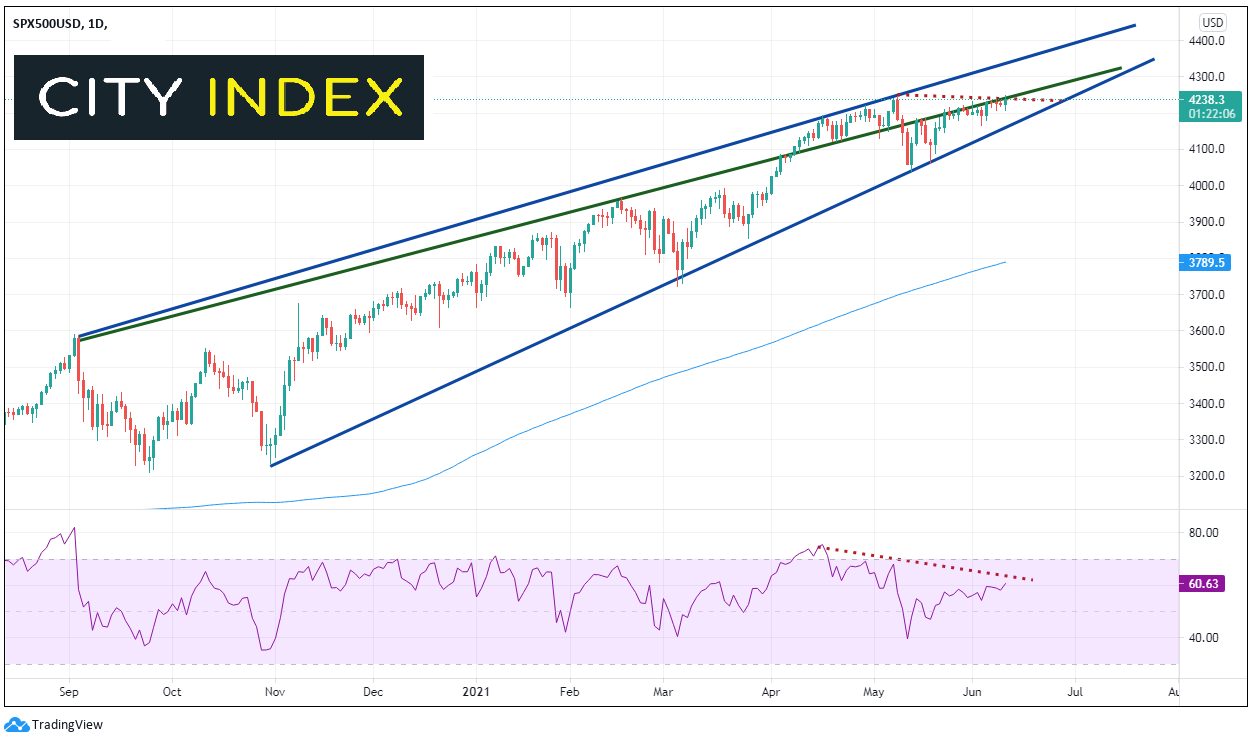 On a 240-minute timeframe, if price can continue to move higher, resistance is at the 127.2% Fibonacci extension level from the May 10th highs to the May 13th lows at 4302.6.  Next resistance is the top trendline of the long-term wedge (see daily) near 4340 and then the 161.8% Fibonacci extension from the same timeframe at 4375.2. First support is at green trendline and today’s lows at 4207.4.  If price trades below there, the next support is the June 3rd lows and the bottom trendline of the wedge (on daily) at 4166.8.  4117.3 is the next horizontal support from late May. 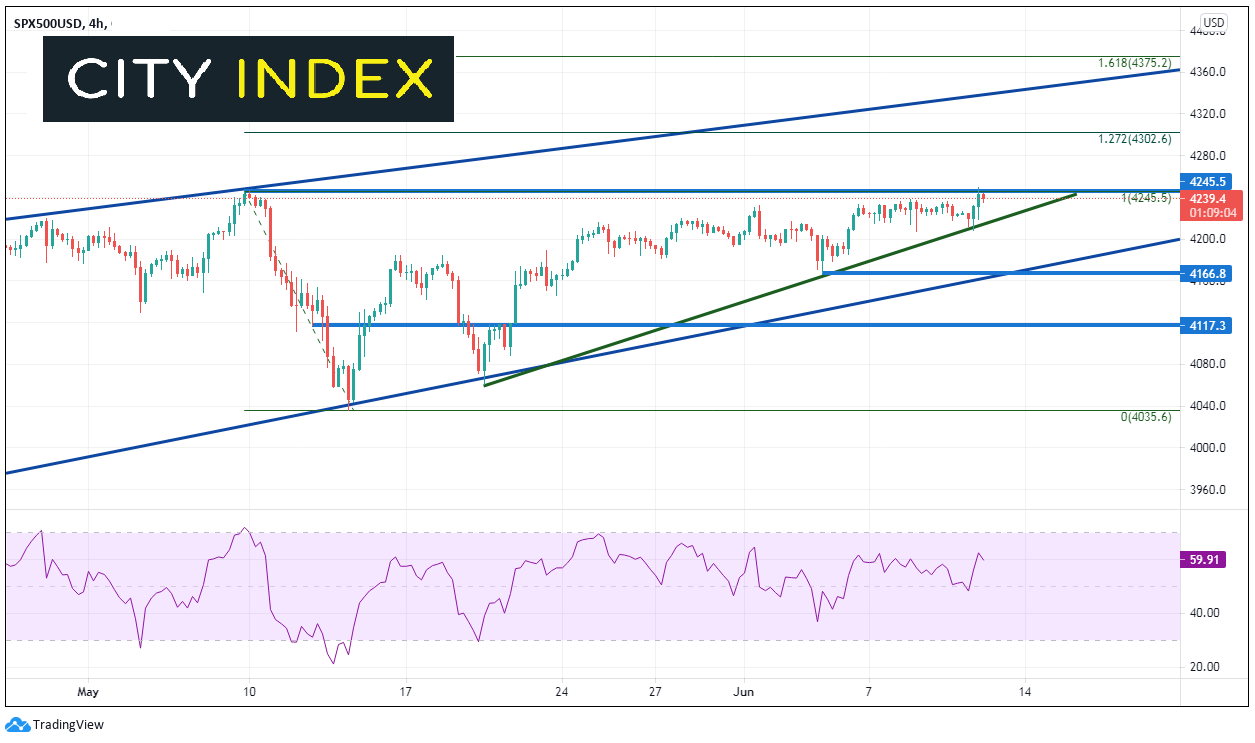 The S&P 500 made new highs, again. However, it’s not that far-fetched of a story.  If it is to continue higher, it may need more dovish talk from the Fed at next week’s meeting.  But if there is any talk of tapering, it could send the large cap index lower.