The biggest event of the year for China begins on February 12th, the Chinese Lunar New Year.  This year’s animal sign is the ox.  This is a time when many workers receive seven days off, and therefore,  millions of people travel to visit friends and relatives all over China. The New Year results in billions in spending and is a huge boost for national and local economies.  In 2020, Chinese officials were trying to contain the early stages of the coronavirus and dissuading people from traveling.  The government canceled many large-scale celebrations as Wuhan and surrounding areas were already on partial lockdown, though many were still able to travel.

This year will be different.

This year will be much more subdued. Once again, all largescale celebrations have been canceled and restrictions have been put in place to significantly reduce travel.  Many factories are remaining open over the holiday, with some increasing pay to incentivize people not to travel.  This will help reduce travel and therefore, help contain the spread of the coronavirus.  In addition, it will help increase production, which had been resilient since the spring, however, has faltered as of late.  January’s Manufacturing PMI had slowed in January from 51.9 in December to 51.3.  Non-manufacturing PMI was only 52.4 in January vs 55.7 in December. One area this year’s Chinese New Year won’t help is retail sales.  December’s retail sales were only 4.6% (YoY) vs 5.0% in November. The lack of travel over the holidays will only reduce these numbers further.  In addition, both headline and core CPI for January (YoY) were -0.3%.  Although keeping the factories open will help industrial metal prices remain strong, such as copper and iron ore, headline CPI may not fare well.

USD/CNH has been in an orderly down trending channel since May 2020 and put in a low on January 5th at 6.4116.  Price then bounced to the top of the channel and traded sideways, moving above the top trendline of the channel January 22nd to a near-term high of 6.5150.  On Wednesday, price retested the lows from January 5th and bounced.  Since  February 5th, price has been moving in a descending channel and bounced off the previous lows and out of the wedge.  Bulls will be looking to buy pullbacks to the lows near 6.4116 and target a 100% retracement of the wedge, near 6.4878.  Horizontal resistance above is at 6.4377. Above there is a confluence of resistance at the 50% retracement level from the January 27th highs to recent lows, as well as horizontal resistance, near 6.4637. First support is back at Wednesdays lows near 6.4176, then the January 5th lows near 6.4116.  If price breaks lower from there, the next support level isn’t until 6.3825, which is support from June 2018. 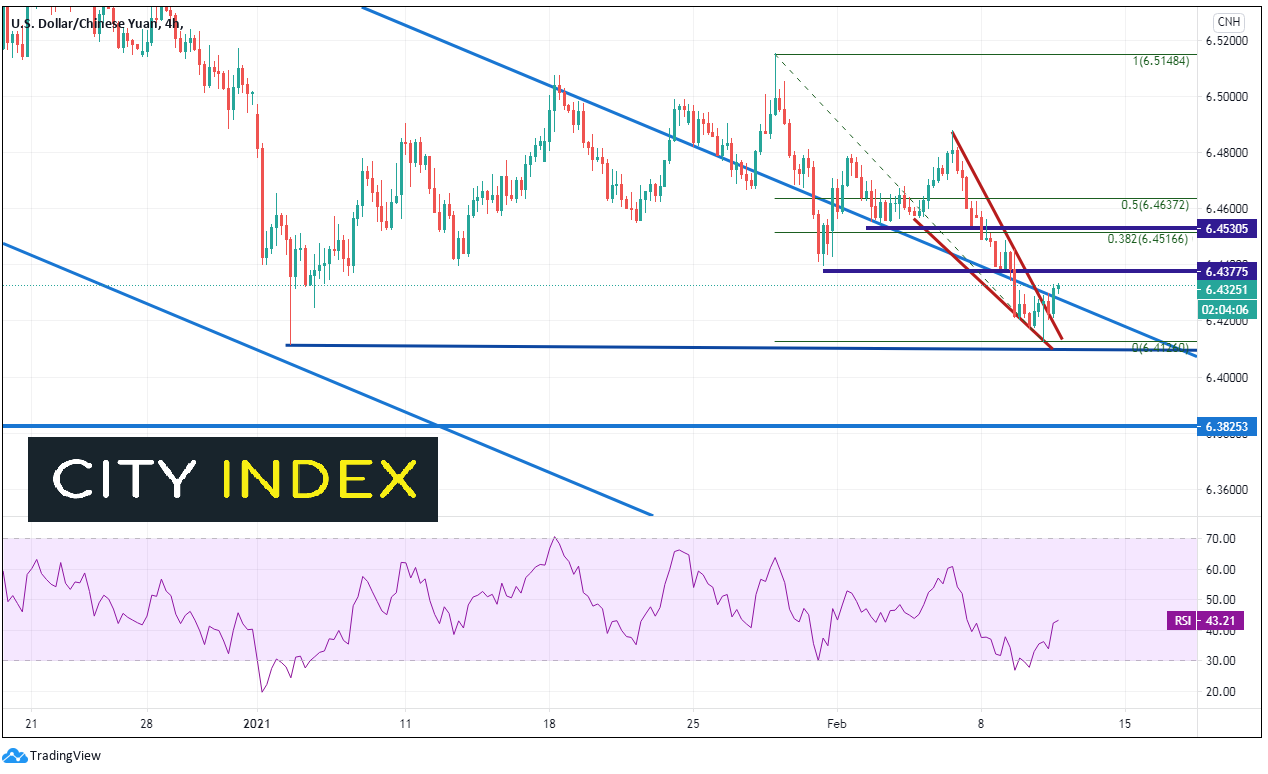 Things will be different this year in China surrounding the Chinese New Year.  However, one thing for certain is that volume will slow dramatically during Asian hours over the holiday.  Be careful trading over the next week during the holidays, as there may be some sporadic moves on light volume as some traders try and take advantage of the illiquidity.

For those of you celebrating, Happy New Year!