The National Bureau of Statistics of China (NBS) released PMI data for China and is another data set which underperforms relative to expectations. The manufacturing sector contracted for a second month of 49.4, although at a slightly slower pace of 94 in July. Yet it also means the sector has contracted five of the past six months. And whilst the services PMI expanded and came in slightly higher than expected, it is the second month of slower expansion. And with new orders remains negative for services and manufacturing, it suggests weaker data could still be waiting.

Clusters of Covid lockdowns and a property sector in crisis saw The State Council announce a 19-point stimulus policy package aimed at stabilising growth, following a meeting China’s Premier Li Keqiang. The PBOC (People’s Bank of China) cut their 5-year Loan Prime Rate by 15bp and the 1-year by 5bp to help grease the wheels of the property sector.

Yet despite these new measures, economists continued to downgrade their growth forecasts for 2022 and weigh up the lingering risks to hinder growth in 2023.  According to a Bloomberg survey, the consensus is for growth to be just 3.5% in 2022, down from 3.9% previously. And that effectively means that economists do not deem Beijing’s latest round of stimulus to be sufficient to prop up growth.

We previously outlined a case for USD/CNH to rise to 7.000, and foresaw its current rally back in April before momentum turned higher. Bullish momentum has remained strong since it broke out of a symmetrical triangle, which projects a target around 7.0300. 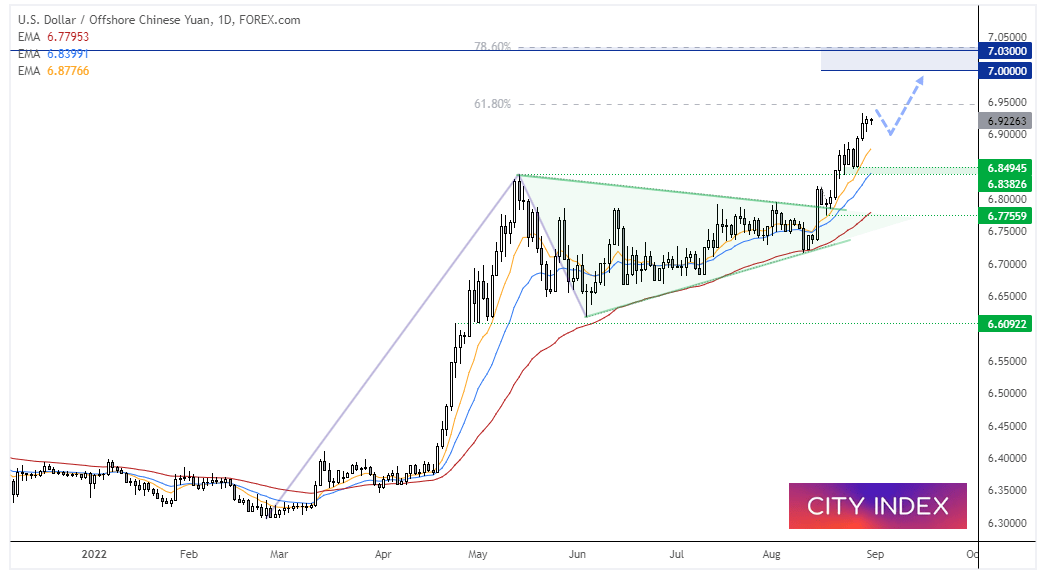 Furthermore, yield differentials between US and China’s 2-year bond yields remains supportive of a higher USD/CNH. And the offshore yuan (CNH) continues to trade at a premium of the onshore yuan (CNY) which suggests speculators continue to expect a weaker Chinese currency. Although if there is any cause for concern it is that the PBOC have raised their reference rate considerably higher than expectations over recent sessions, which shows that they are supporting the currency to a degree and capping upside potential for USD/CNH.

The 6.9500 area – which is near the 61.8% Fibonacci projection – may provide interim resistance ahead of the 7.000 area. But overall, we see little reason to adjust the underlying bullish bias, so prefer to seek dips following evidence of swing highs.