Qantas Airways Limited (QAN) is the flag carrier of Australia and the third oldest airline in the world. It reports its full-year numbers on the 25th of February.

The travel industry has been decimated by the COVID-19 pandemic as leisure and corporate travel ground to a halt. The crisis forced Qantas into a significant restructuring program including the grounding of aircraft and 8,500 job losses.

The recent return to domestic travel has seen the number of full-time equivalent roles stood up, increase from around 9,000 in October 2020 to 11,500 in December 2020; this is expected to increase to around 14,000 in quarter three. Currently, approximately 13,500 roles remain stood down.

The group's international business remains largely grounded apart from repatriation services and a limited number of flights to New Zealand under a one-way bubble arrangement (allows only for New Zealanders to visit Australia). Broader international travel is unlikely to resume until 2022 and is expected to take some years to fully recover.

As of 30 November 2020, Qantas had $3.6 billion in available liquidity, including $2.6 billion in cash and $1billion in an undrawn credit facility. In an update in December, Qantas said it hoped to be close to breakeven at the underlying EBITDA level for the first half and net free cash flow positive (excluding redundancies) in the second half.

Since then domestic borders have opened and shut in response to local clusters including the “Avalon” cluster in Sydney over Christmas. More recently the “Holiday Inn” cluster in Victoria has resulted in border closures during the Australian Open tennis tournament.

Analysts are forecasting an operating loss of $65 million for the half. This is down from an operating profit of $1,896 million a year earlier. No interim dividend is expected to be declared.

The price action from the March 2020 $2.03 low has formed an ascending trend channel and is currently providing support $4.50/$4.40 area, just below the current price. Providing this support holds on a closing basis, the preference is for the Qantas share price to retest the November 2020, $5.79 high, with scope towards $6.50. 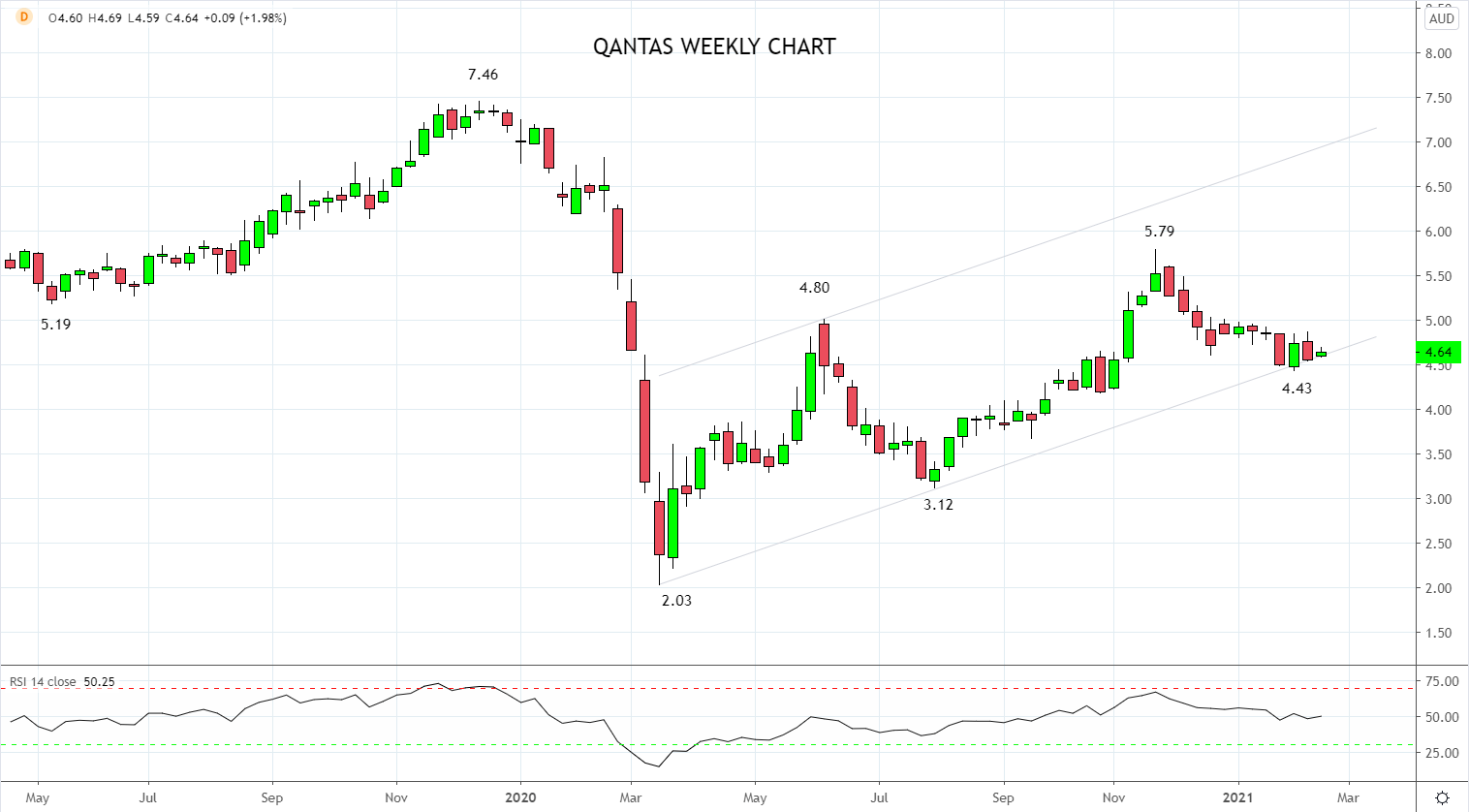 Source Tradingview. The figures stated areas of the 15th of February 2021. Past performance is not a reliable indicator of future performance.  This report does not contain and is not to be taken as containing any financial product advice or financial product recommendation