The Reserve Bank of Australia (RBA) surprised markets with its first interest rate of the new tightening cycle by hiking 25bps to take rates from a record low 0.1% to 0.35%.  Market expectations were for a hike of only 15bps.  The central bank will also stop reinvesting proceeds of maturing bonds, which means it will begin quantitative tightening.  In addition, the RBA updated its inflation forecast for 2022 to 6% from 5.1%.  See my colleague Tony Sycamore’s recap here.  As a result of suddenly turned hawkish RBA’s surprise decision, AUD/NZD has broken out above some key technical levels.

On a weekly timeframe, AUD/NZD had been trading lower in an orderly channel since October 2013 (green lines).  After testing the upper trendline of the channel over the past few weeks near 1.0925, today’s news caused the pair to burst higher and take out the top trendline of the channel.  In addition, AUD/NZD traded above horizontal resistance at 1.0439, reaching its highest level since August 2018!  However, notice that the RSI is in overbought territory, an indication that AUD/NZD may be ready to pull back in the long-term. 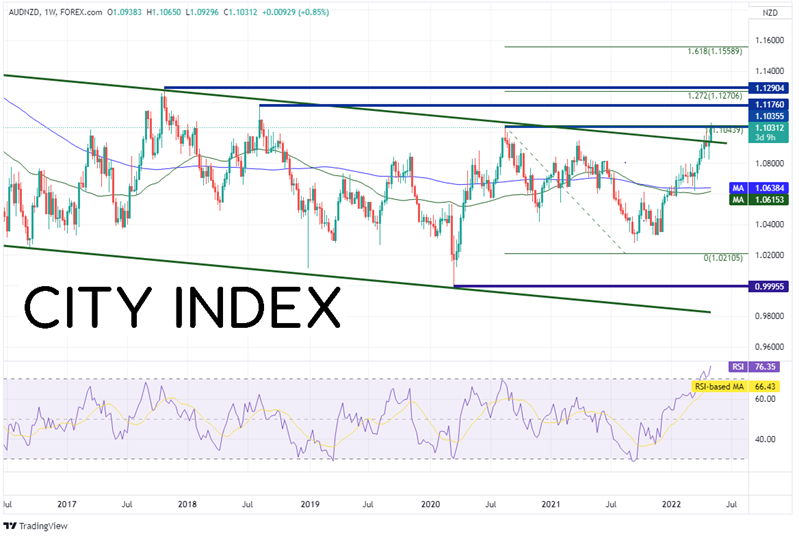 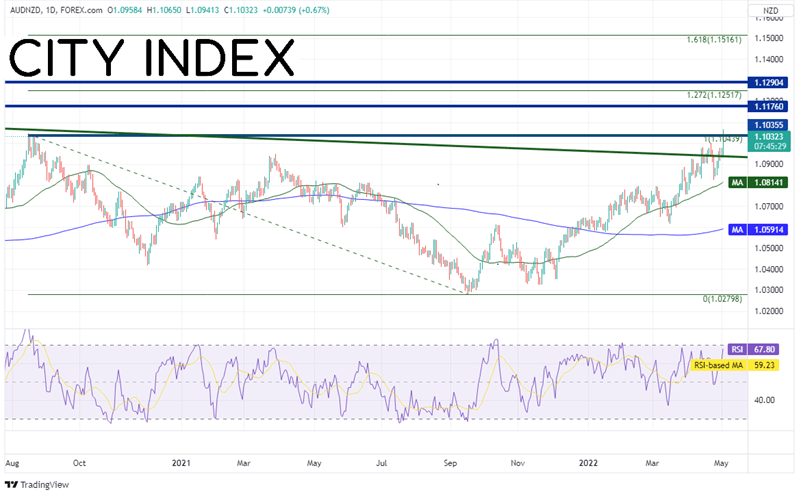 On a 240-minute timeframe, AUD/NZD had been moving higher in an ascending wedge formation.  On April 22nd, price broke below the wedge and pulled back to the 38.2% Fibonacci retracement from the lows of March 15th to the highs of April 20th, near 1.0825.  In addition to testing the horizontal resistance at 1.0439 on the weekly timeframe, price is also testing the underside of the rising wedge.  If the trendline holds and confirms the RSI on the weekly timeframe, first support is at the April 20th lows of 1.0825. Below there, support crosses at the 50% retracement level and the 61.8% Fibonacci retracement level from the same timeframe at 1.0807 and 1.0762, respectively. 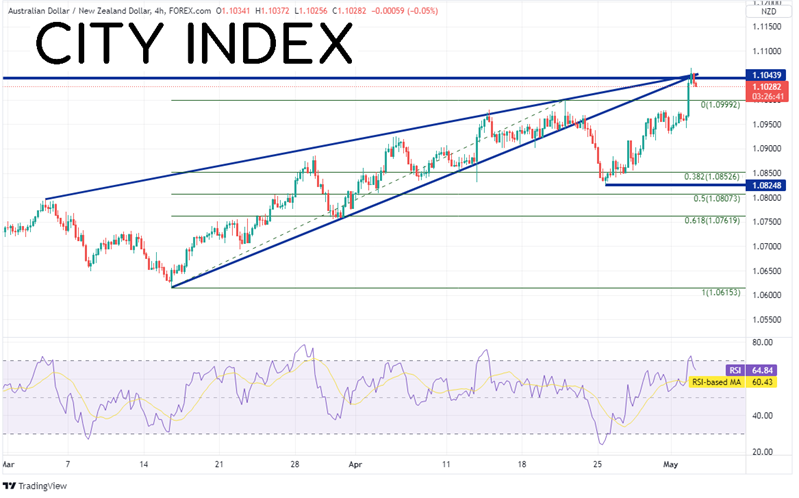 The RBA’s surprise hike caught AUD/NZD traders with their guard down.  As a result, the pair traded to its highest level since August 2018.  Watch to see if price can hold above the key breakout levels on the weekly and daily timeframes.