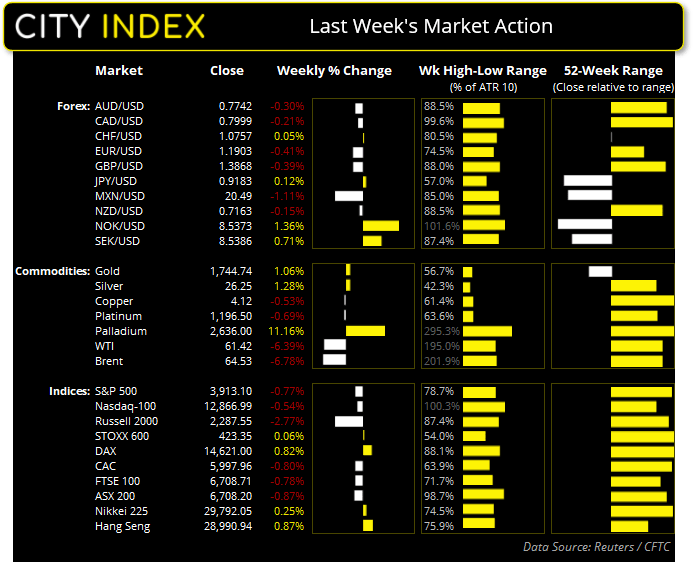 
Indices: Down, but not out

The Nasdaq survived the week above 12,755 support, despite a minor attempt to break it on Friday and 4% sell-off on Thursday. Why? Because bond yields fell. But Friday’s ‘rally’ as small at best and the week closed with a bearish hammer between the 10 and 20-week eMA’s. Therefore, a downside break of said support is not out of the question this week unless bulls can regain control sooner than later.

The S&P 500 remains above its 20-day eMA and just below its 10-day, after forming a small indecision candle on Friday (Rikshaw Man Doji). The Russel 2000 finds itself in a similar position, although Tuesday and Thursday’s bearish engulfing candles are clearly more prominent. Ultimately, all US indices closed lower last week.

The ASX 200 has remained in the 6650 – 6800 range for the past four weeks. The last three days of last week were bearish and it trades just above 6650. So until momentum break s below 6650 or above 6800, range trading strategies are preferred (incidentally AUD/USD find itself in a similar scenario).

Learn how to trade indices

Forex: Fed gave the dollar a wee boost on Friday

US dollar index (DXY) closed to an 8-day high on Friday after the Federal Reserve said they will remove a temporary rule which forced larger banks to hold higher capital requirements. It was implemented in response to market turbulence due to the pandemic and is due to be removed after 31st March.

Learn how to trade Forex

EUR/NZD has been in a downtrend for the past year. However, price action is now leaving a trail of clues that it may try a pop higher as part of a countertrend move.

After breaking beneath the July 2019 low and failing to test the March 2019 low, a bullish reversal occurred as part of a bear-trap at the lows. Since then, prices have drifted sideways yet the bearish trendline has capped as resistance, but Thursday’s bullish close shows demand at 1.6488 and warns of a higher low. 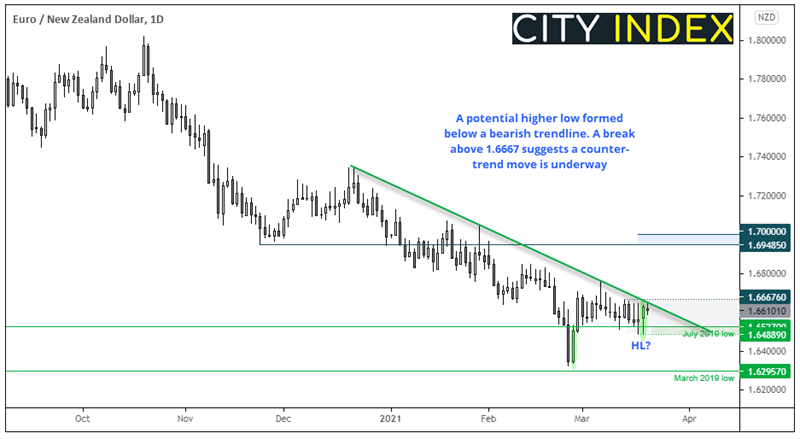 USD/TRY has risen an eyewatering 14.8% this morning after Turkey’s President Erdogan has fired his latest Central Banker. Now on his third culling since July 2019, it is the latest twist which undermines confidence in the central bank and government. The now ousted governor Naci Agbal was guilty of raising interest rates three days ago to fend off soaring inflation (which is generally agreed to be the right thing to do with doble digit inflation). This classic central bank move bought his 5-month term was bought to a swift end. He will be replaced by Sahap Kavcioglu, a vocal critic of high interest rates and former member of Erdogan’s ruling AK Party. USD/TRY moved from around 0.7200 to 0.8400 at market open as the Turkish Lira went into freefall. 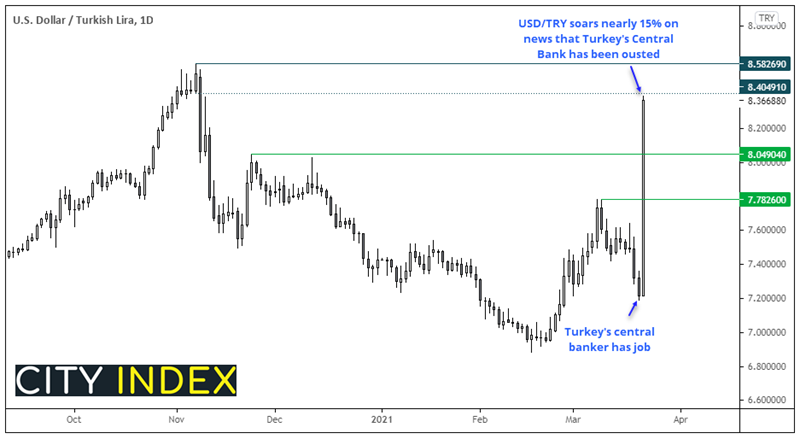 WTI futures found bounced of the 50-day eMA during Thursday’s -7% sell-off, then Friday produced a bullish inside bar from 59.24 support and re-tested a broken trendline on the daily chart. From here bears need to decide whether to regain control and force prices to new lows, so we’ll keep a close eye on price action around the said trendline. But for our bullish bias to return we’d prefer to wait for at least a break of 63.13.

Gold produced a small bullish inside day on Friday, but until we see a clear break above the 1760/64 resistance zone the risk remains for another dip lower towards 1700. Yawn.

Anyway, of much more interest last week was Palladium’s 11% rally after it broke out of a multi-month range. Friday produced a (relatively) small bearish inside candle to suggest a period of consolidation or retracement is on the way. We remain bearish above 2500 but, at this stage, doubt a retracement may reach that far so will watch for a series of small compression candles as this warns that a burst of volatility could await (which will hopefully be to the upside). 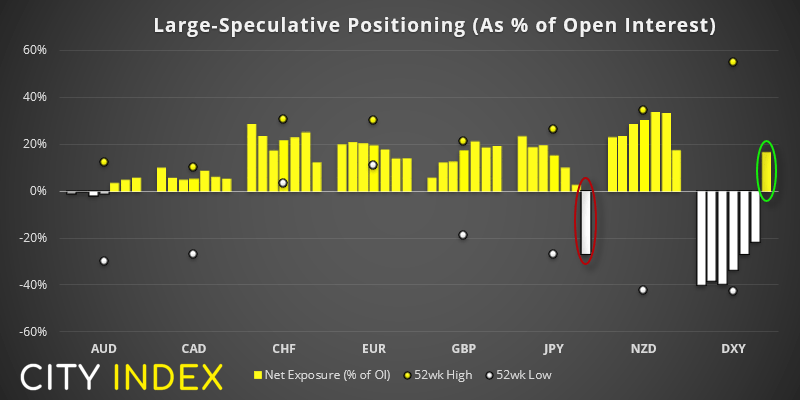 
Up Next (Times in AEDT)