Asian Open: S&P and Dow at new highs, dollar on the ropes 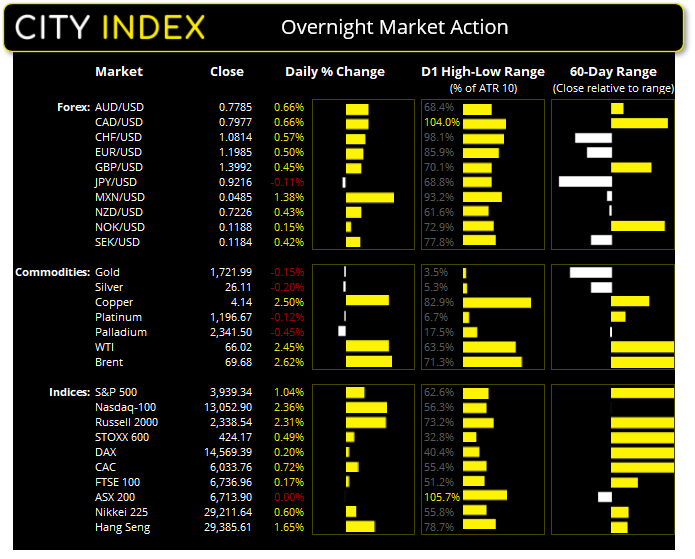 JOLTS job openings increased to 6.9 million in January, its highest in 13-months and exceeding estimates by over 0.32 million. Initial jobless claims were down to 712k versus 725k expected and 745k prior and continuing claims were also down slightly.

Technology stocks came back into fashion rising over 2.5% and leading Wall Street higher. The Nasdaq closed firmly above trendline resistance on the daily chart which suggests an ABC correction from its highs may now be complete. Still, it remains beneath record highs unlike its peers.

The Dow Jones, S&P 500 and Russell 2,000 all broke to fresh record highs. The Russell was the strongest performer of the three, opened at the low and closed at the high to underscore the bullishness of the session. And whilst the S&P printed an intraday record high it retraced near the end of the session to close below its previous high.

The French CAC was the strongest performer in Europe and the DAX edged its way higher to a fresh record.

There were no major changes in ECB’s policy overnight, although they revealed in their press conference that the Pandemic Emergency Purchase Programme (PEPP) would be significantly faster over the next quarter. The Euro was higher against GBP. JPY and USD. Read Joe Perry’s breakdown ECB: What did we learn today?

Forex: Dollar back in the doldrums

Positive news flow sent the US dollar broadly lower, particularly against the Mexican Peso (USD/MXN -1.6%) and the South African rand (USD/ZAR -1.3%). The US dollar index (DXY) fell to a 5-day low, the Australian dollar and Canadian dollar were the strongest majors, the US dollar and Japanese yen were the weakest. AUD/JPY and CAD/JPY were top of the leader board which USD/CHF and USD/CAD were at the bottom.

At some point the strong run in USD/CHF had to provide a retracement. We suspect the yen could now follow suit. 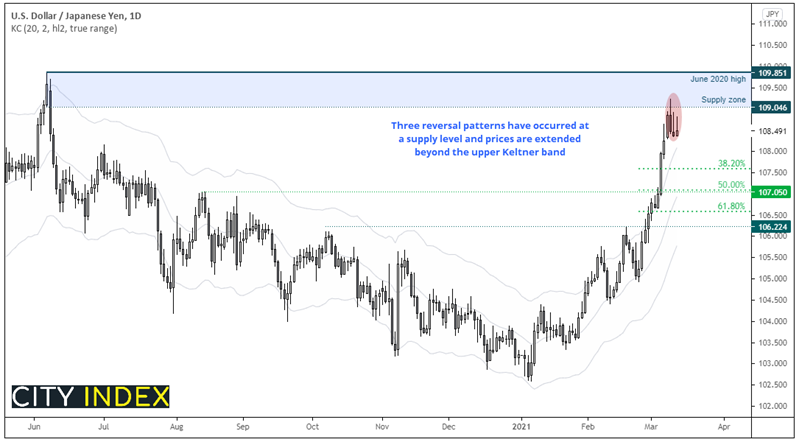 USD/JPY’s daily chart has stalled at a supply level from back in June 202 and produced three reversal patterns (dark cloud cover and two bearish pinbars). Given they are extended beyond their upper Keltner band, we suspect mean reversion could be due.

Commodities were broadly higher with Thomson Reuters’s CRB commodity index rising to a 2-week high and hinting at a re-test (and break) of its multi-month highs.

Oil prices also rallied on the back of the weaker dollar, with WTI climbing back above $66 in line with our bullish bias. Whilst the high has stalled between the April January 2019 and January 2020 high, $70.00 remains the next target if prices can now hold above $63.00.

It was a mixed affair for metals. After rising to 1735 overnight, gold prices reversed and produced a bearish hammer on the daily chart then closed beneath its 10-day eMA. Whilst this does not invalidate our bias for a major low around 1680, it suggests the potential for a minor retracement from current levels before moving towards 1640 over the coming week/s. Silver also struggled, finding resistance at a cluster of averages (10, 20 and 50 eMA’s between 26.13 – 26.38). Copper futures were the main exception with a close above a retracement line form tis February high. Now trading around 4.14 the bias is for a re-test of its highs around 4.36. 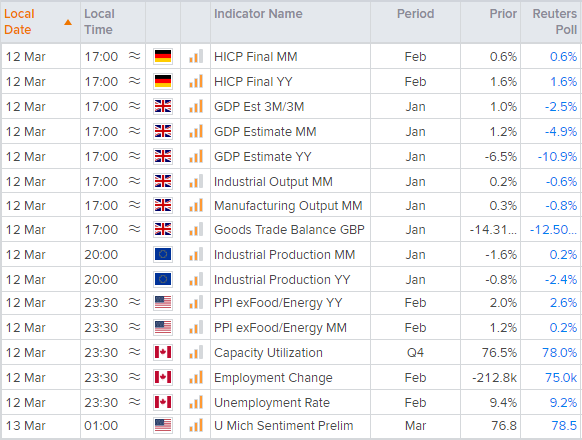 
It’s a busy calendar to see the week off, although mostly consisting of second-tier data. Still, GBP and FTSE traders can look forward to a data dump at 17:00. Eurozone industrial production is at 20:00, producer prices (inflation source) for USD traders at 23:30 and, at the same time, employment data for Canada – which should put USD/CAD into focus for news traders.