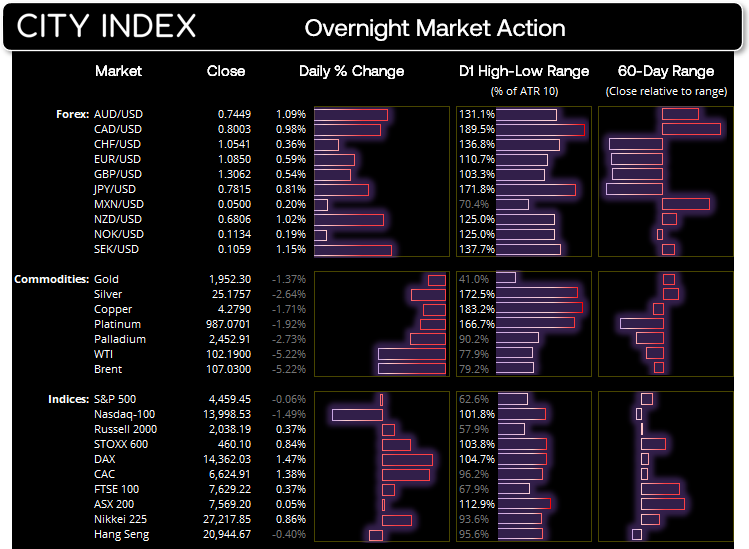 US indices diverged which saw the S&P 500 post a minor gain yet the Nasdaq selloff, after Netflix (NFLX) posted their first subscription drop in a decade. The stock fell as much as -38.4% overnight to eventually close down by around -30% during its worst day in nearly -decades.

Europe was higher and the DAX broke out in line with our bias and reached our initial target at 14,360. This reaffirms our suspicions that the corrective low was seen at 13,887 and 14,600 now comes into focus for bulls.

ASX 200 falters at its record high 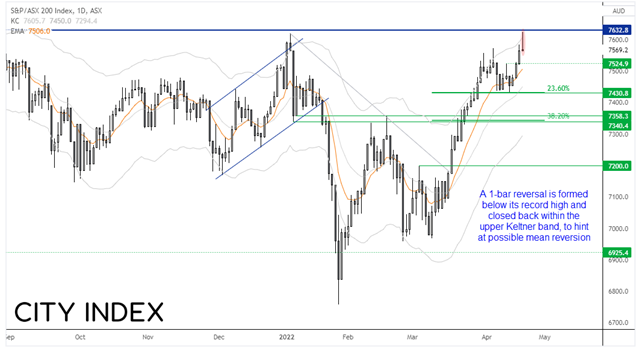 The ASX 200 came within 10 points of its record high yesterday. Yet it failed to hold onto gains, effectively closing flat and printing a bearish pinbar by the close. Given the 1-bar bearish reversal formed below its record high and closed back within the upper Keltner band, we suspect there’s a case for some mean reversion from current levels. Initial downside target for bears to consider is the 7525 high or 7500 (near the 10-day eMA). Should we see a particularly aggressive selloff then perhaps we can consider the next target at 7430.8. But until then, we’d look for evidence of a wing low around 7500.

Volatility subsides in the commodity space

Silver was effectively flat and closed on its 20-day eMA, whilst gold printed a small bullish candle and closed just above its 20-day eMA. Whilst our core bias for gold is for a break above 2000, our near-term bias remains bearish below 1965 and for a run down to 1925. An immediate break above 1965 invalidates that near-term bias. WTI effectively tracked silver with a flat close and Doji on the daily timeframe after finding support at $100.

And by that, we mean inflating. New Zealand’s annual CPI rose to a 32-year high of 6.9% (and up 1.8% q/q). Yet the New Zealand dollar was off around -0.5% as it missed expectations, even though these punchy numbers do mean that the RBNZ may hike another 50-bps at their next meeting.

As for the BOC, some are speculating a 75-100 bps hike in June following their ripper of an inflation report. There are several headline prints within the Canadian inflation report, most of which accelerated to a multi-decade high, none of which came in softer. CPI rose to a 31-year high of 6.7% and beat estimates of 6.1%. The BOC inflation rate hit a record high of 5.5%, and all three preferred inflation gauges for BOC rose in tandem. (Median CPI reached a 31-year high, trimmed a 3-year high, common a 13-year high).

Given that the BOC raised their concerns that high inflation will become “entrenched”, these eye-watering CPI prints not only cements a 50-bps hike at their next meeting but also increases the odds of a 75-bps or 100-bps hike in June. Interestingly it has been confirmed that Statistics Canada will add used vehicles to their inflation print from next month whilst likely means we’ll see even higher inflation going forward. The Canadian dollar was initially higher against the board but made notable gains against USD, CHF and GBP.

Weak housing data weighed on the US dollar and bond yields overnight, allowing commodity currencies to exhibit some mean reversion. It was the worst session in over three-weeks for DXY and now looks set to retest 100 within the next 24 hours. This also saw USD/JPY do something peculiar and print a down-day. Markets now see the ‘line in the sand’ for the yen at 130 and we suspect markets want to at least test it but yields likely need to also rise for that to happen sooner than later. USD/CAD suffered its worst session since August 2021 and AUD/USD closed firmly above 0.7400 in line with our bullish bias outlined in Tuesday’s report.

Up Next (Times in AEST)