Progress to certificate:
0%
0 out of 8 lessons completed

What is Bitcoin forking?

Bitcoin and other crypto currencies have experienced a number of market events that have had the potential to cause significant volatility. One of these events is known as a ‘fork’.

How does Bitcoin forking happen?

A fork happens when one blockchain splits into two. Let’s remind ourselves what a blockchain actually is. A blockchain is a shared public ledger that contains all of the confirmed transactions carried out using Bitcoin. The other crucial element you need to know about Bitcoin to understand forking is the processing of transactions known as mining.

Mining is a bit like a consensus system that is used to confirm waiting transactions by including them in the blockchain. Mining is supposed to do three key things:

To be confirmed, a transaction needs to fit in a block that adheres to strict cryptographic rules that then needs to be verified by the system. This system prevents previous blocks from being changed, and thus invalidated, and it also stops any individual from controlling the blockchain or replacing parts of it in order to remove their transactions. 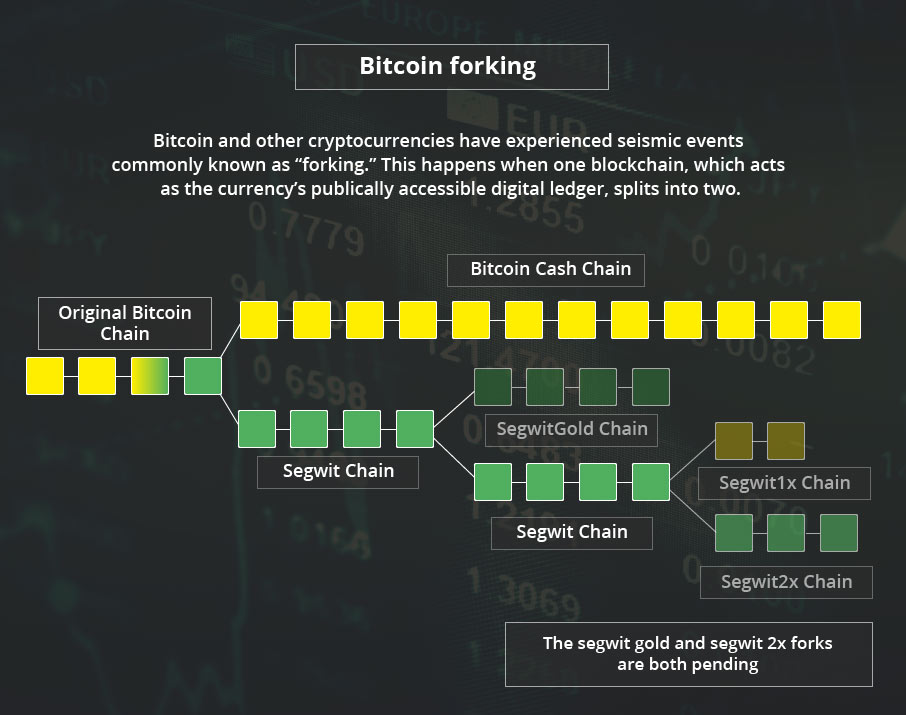 Forks have been happening since the genesis of Bitcoin, and small forks happen quite frequently. This occurs when two miners find a new block at the exact same time. Both will be valid and legitimate blocks, and both will be linked to the block before, however, the next block will have to choose one of these two. Miners tend to converge on one chain, and discard the other. These discarded small chains are known as “orphaned blocks”.

Forks and the scalability of bitcoin

The forks that we have been hearing in the news recently are completely different from the small forks that we mention above. In recent years, the discussion has shifted to how Bitcoin deals with scalability and high load. The trouble is that as Bitcoin has grown in popularity the blockchain has been under stress and is experiencing both delays and high costs for transactions.

This has led to technical discussions within the bitcoin community. The first solution was to increase the size of the blocks in the blockchain, this has now evolved into allowing the blockchain to fork.

A fork is the result of mining programmes using new software that creates a new blockchain, which creates two separate records of data. This new software is way of choosing new Biotin rules, including increasing the size of the blockchain and its efficiency.

It is then up to the network of bitcoin miners to agree which of these blockchains to continue using. Occasionally the two blockchains can exist in parallel.

What does this mean for the price of Bitcoin?

So far, these fork events have had little or no impact on the price of the underlying Bitcoin. However, uncertainty about whether bitcoin can splinter into multiple currencies if mining groups continue to adopt differing strategies, could weigh on its attractiveness as a store of value going forward.

Creating a new currency from scratch goes against one of the crypto currency’s core values: that you should not do what central banks have been doing since the financial crisis and create money out of nothing.

Thus, even though forks have so far benefitted the crypto community by boosting capacity in the blockchain and speeding up transaction times, multiple forks in future could be bitcoin’s undoing.

In the event that the current bitcoin splits into two, new bitcoins are created, this is known as a hard fork. We will generally follow the bitcoin that has the majority consensus of cryptocurrency users and will therefore use this as the basis for our prices. In addition we will also consider the approach adopted by the exchanges we deal with, which will help determine the action we take.

We reserve the right to determine which cryptocurrency unit has the majority consensus behind them.

Over periods of substantial price volatility around fork events, and we may take any action as we consider necessary in accordance with our terms and conditions including suspending trading throughout if we deem not to have reliable prices from the underlying market.

Burberry FY preview: Where next for the Burberry share price?
Article
Burberry is set to have recovered well following a tough few years but its strong set of results could be overshadowed by fresh Covid-19 disruption in China.

Burberry FY preview: Where next for the Burberry share price?
Article
Burberry is set to have recovered well following a tough few years but its strong set of results could be overshadowed by fresh Covid-19 disruption in China.