Progress:
0%
0 out of 8 lessons completed

Bitcoin is a decentralised cryptocurrency or peer-to-peer digital payment system which is used as a method of investment as well as transaction for other currencies, services or products.

Initially launched in 2009 by an anonymous internet user or group known only as “Satoshi Nakamoto,” the virtual currency has grown rapidly since its inception.

The value of early Bitcoin transactions were negotiated by miners on the bitcointalk forums with each Bitcoin at the time worth an estimated $0.06.

As Bitcoin has become more widely used and as greater quantities of Bitcoin have been mined the price has risen sharply.

How does Bitcoin work?

The information stored in the blockchain is open to anyone and because of the high level of transparency makes Bitcoin transactions exceptionally secure. Records stored using blockchain cannot be altered retroactively and must be confirmed and collaboratively authenticated by a community of Bitcoin “miners” or the overall network majority. 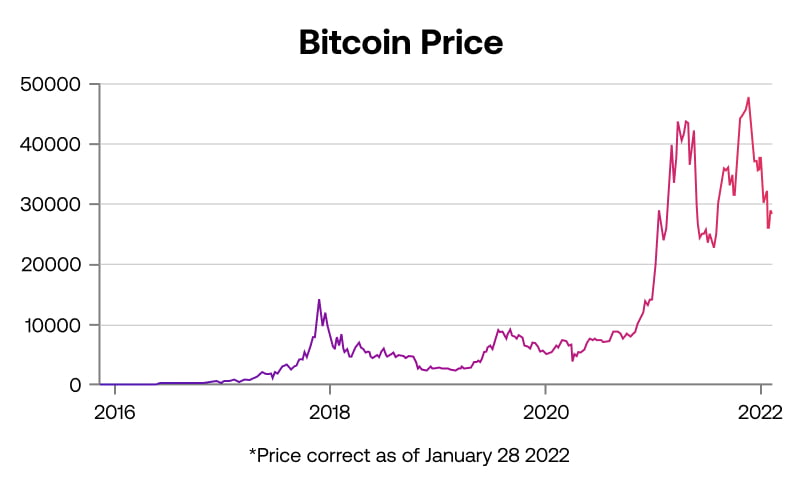 Bitcoin is a cryptocurrency and as a decentralised asset it is free from interference by a single country, macro events or natural disasters which can impact more traditional asset classes. Because Bitcoin is not traded on an official exchange, you can trade 24 hours a day.

When you trade Bitcoin:

Bitcoin is also a highly volatile market and as demand surges for a finite number of Bitcoins (there are 21 million available) so prices can experience dramatic and significant surges.

The price of Bitcoin has surged 40,000% since its inception and one of the biggest risks to traders is this extreme volatility. Bitcoin is currently much more volatile than any other market and when excess volatility crashes, you can be faced with significantly larger losses than in other markets.

Because there are a limited amount of reputable digital asset exchanges and no single reliable price source, this could, in theory, cause the price to tumble sharply. Remember, Bitcoin is also a very new asset so we don’t yet know how it may perform in a major financial crisis. Nobody knows whether it will become globally accepted or even whether it may one day disappear or be overtaken by other cryptocurrencies.

It is also possible that certain governments may ban its citizens from holding Bitcoin with the effect that the price of cryptocurrency may collapse.

Furthermore, there is a possibility for large scale cyber attacks on digital asset exchanges which are likely to have a strong, short-term impact on the price of Bitcoin.

Investors involved in Bitcoin trading should also be aware of the potential for a so-called “51 percent attack”. A 51 percent attack refers to one centralized Bitcoin mining operation gaining over 50% control of the blockchain which would allow the operation to reverse transactions making the entire blockchain unusable with the effect that the future of Bitcoin might become questionable.

Remember that while this heightened volatility in the Bitcoin market brings opportunity, it also means a greater degree of risk so understanding the market and managing your risk carefully with the use of stops and limits is crucial when trading Bitcoin. Like with any market, make sure you do your research and understand how and why the price of Bitcoin moves before you start trading.

When you trade Bitcoin at City Index you are trading on leverage and this means you can gain a larger exposure to the market than might be possible by buying actual Bitcoins. This means that you can open a position without tying up a lot of your capital and can benefit from sharp market movements.

Remember, Bitcoin can be extremely volatile  and sharp market movements can mean that you had the potential to suffer significant losses quickly, and in some cases losses that are more than you initially invest.We strongly recommend that you understand the risks of trading Bitcoin and ensure that your strategy incorporates strong risk management tactics.

In the event that the current bitcoin splits into two, new bitcoins are created, this is known as a hard fork. We will generally follow the bitcoin that has the majority consensus of cryptocurrency users and will therefore use this as the basis for our prices. In addition we will also consider the approach adopted by the exchanges we deal with, which will help determine the action we take.

We reserve the right to determine which cryptocurrency unit has the majority consensus behind them.