Will the RBA repeat with a 25bp hike tomorrow?

The RBA meeting in a nutshell:

Will Australia’s inflation force the RBA to hike by 50bp?

Up until recently, I had been leaning towards the RBA repeating a second 25bp hike tomorrow and potentially even pausing in December (data depending…). Yet last week’s strong inflation report puts another fly in the ointment. On one hand, Governor Lowe has said the RBA tend to forecast their policy on inflation expectations – which remain well anchored. On other hand, if October’s debate for 25 or 50bp was ‘finally balanced’ then it poses the question as to whether the strong inflation report tips the scale towards a 50bp hike. Furthermore, producer prices also rose to a record high. 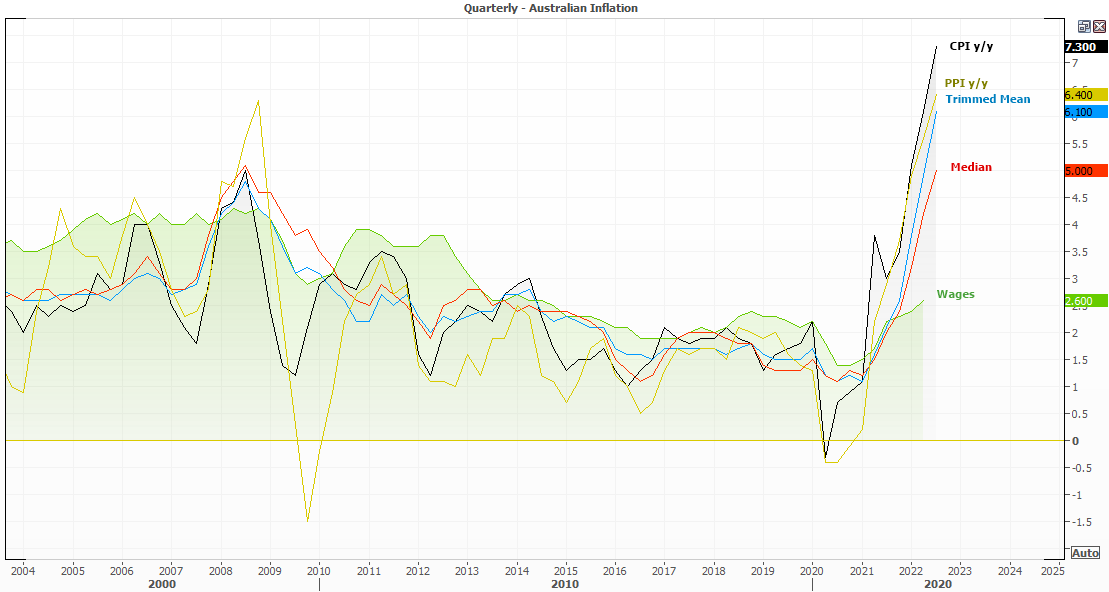 I think it is a closer call than some suspect, so my shift in stance over the past week is that I’m not sat on the fence as opposed to confidently backing the 25bp. But perhaps the better way to look at this (from a trader’s perspective is at least) is that we want the consensus to be wrong, as it generally prompts a stronger reaction as trader’s are forced to close out losers and reverse their direction. And the fact that there was little reaction to Australia’s

Retail sales rose for an eight consecutive month in September by 0.6%. 8 of its 9 territories were also rising (only South Australia dipped by -0.2% m/m) with shoppers mostly spending on clothes, footwear and personal accessories and cafes, restraint and takeaway services. This is hardly going to make the RBA blink, but it does show relatively strong consumer demand despite higher prices – suggesting that households are managing the higher rates. For now, at least.

Last week the S&P Global PMI survey for Australia’s services sector contracted for the first time since January, at 49 down from 50.6. Whilst the manufacturing PMI expanded at 52.8, the composite also contracted to show broader industry contraction. It points to weaker demand for Australian businesses, and is a theme to watch as we head into next year – as contracting PMI’s point to softer growth.

What the expectations from the RBA tomorrow?

So if there are any surprises from tomorrow, it would take a 50bp hike from the RBA. If they’re to retain ‘finally balanced’ and hike by 25bp, it suggests the RBA are still capable of hiking in 50bp increments going forward. Conversely, the removal of that comment could also be taken as a sign that board members see 25bp hikes as appropriate going forward. 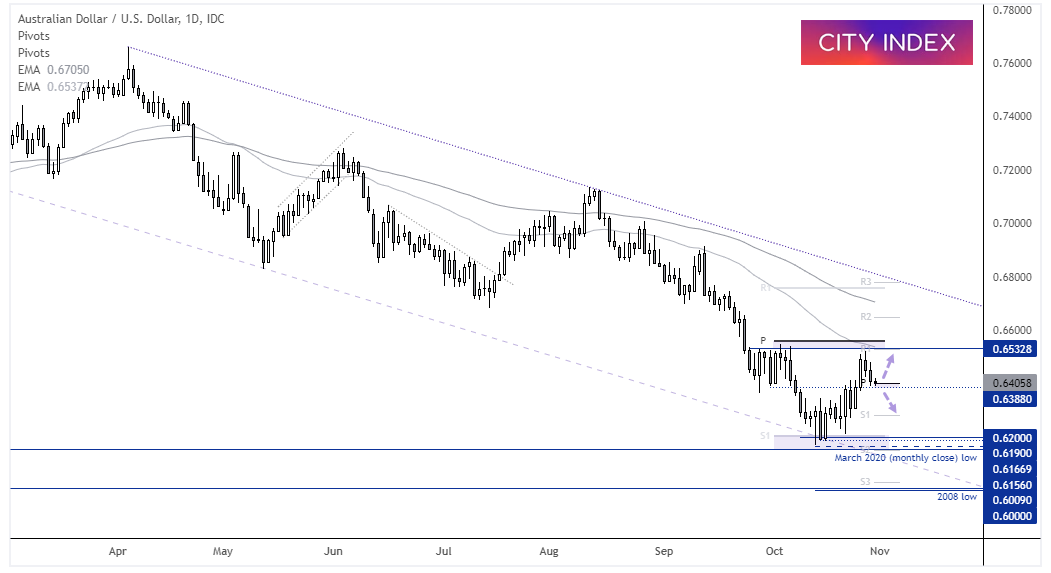 The Aussie bounced 5.7% from the October low before pullback over Thursday and Friday. It remains within a wider bullish channel which still allows for further gains, but at the same time we do not yet know whether or not the pullback from 0.6520 is yet complete. We may be in for a quiet session and we need to see where the US dollar decides to go ahead of tomorrow’s meeting, but support around the weekly pivot and 0.6390 / 0.6400 support is an area of interest for traders over the near-term, as it likely temps bullish with prices above it or bears with a break beneath it.

Also note that overnight implied volatility has spiked above the 1-week IV, which shows traders are expecting a bust of volatility ahead of the meeting. Furthermore, the AU-US 2-year yield differential has diverged with the Aussie’s higher prices, and they don’t generally diverge for long these days. And that leaves me wondering whether the spread rise, the Aussie fall or they ‘meet somewhere in the middle’.