Petrofac 2021 preview: Where next for the Petrofac share price?

When will Petrofac release 2021 earnings?

Petrofac will release annual results for 2021 on the morning of Wednesday March 23.

Petrofac was pushed into the red during the pandemic as demand for energy collapsed, which had a knock-on effect in the number of companies launching new projects and demand for Petrofac’s array of services. This trend continued for much of 2021 as clients kept budgets tight. Meanwhile, Petrofac was also plagued by a legacy investigation by the Serious Fraud Office throughout the year.

As a result, Petrofac has said annual revenue will come in around $3.0 billion compared to the $4.1 billion reported in 2020. Net profit will be ‘broadly in-line with 2020’, when it delivered a business performance figure of $48 million. Analysts forecast the reported loss at the bottom-line of $75.6 million will narrow from $180 million the year before.

Engineering & Construction revenue was the main drag on the topline after falling to $1.9 billion in 2021 from $3.1 billion in 2020 as Covid-19 weighed on the business and a weaker order intake in previous years resulted in less work. Revenue from its Integrated Energy Services that homes its exposure to oil and gas production will also be materially lower thanks to a large drop in output. The bright spot will be the Engineering & Production Services division, which is set to report a jump in revenue to $1.1 billion from $933 million the year before thanks to the growing order book in recent years.

However, the focus will on what 2022 will bring considering how different the picture is now compared to just a few months ago. Energy demand has rebounded as the world reopens and gradually abandons lockdown measures, which has sent oil and gas prices to multi-year highs, and some western governments are now pushing for more local projects to be built to develop domestic energy supplies as they look to wean themselves off Russia. Meanwhile, the SFO investigation that has hung over the business concluded in October and the fine of $106 million was less than feared – removing a key problem that not only knocked investor confidence but also weighed on its reputation and impacted its ability to bid for certain contracts.

With Covid-19 disruption easing, its legal cases wrapped-up and a far more positive outlook for the industry compared to six months ago, Petrofac is in a strong position to recover this year. The end of the SFO investigation also allowed it to complete a much-needed refinancing and leaves it with around $200 million in net debt and $600 million in liquidity at the end of 2021.

Petrofac said it had continued to deliver a ‘strong performance’ in Engineering & Production Services but said that Covid-19 was still causing disruption for its Engineering & Construction division and pushing up costs. That will make its goal to deliver $250 million in annual cost savings before the end of 2021 even more important. Those cost-savings could prove crucial considering analysts believe Petrofac can return to profit in 2022 despite anticipating a 12% fall in annual revenue.

Petrofac provided a trading update in mid-December and said booked around $1.5 billion of orders in the second half of 2021 after delivering a lacklustre $500 million in the first half, pointing toward higher levels of activity. That acceleration has largely been driven by its largest Engineering & Construction division, with order intake for Engineering & Production Services (which Petrofac aims to convert into E&C contracts) remaining broadly flat from 2020. Petrofac’s pipeline has around $40 billion of bids scheduled for award before the end of 2022, most of which are Engineering & Construction contracts. The company has already locked-in $2.0 billion worth of revenue for 2022.

Integrated Energy Services has also ramped-up production entering 2022, with output running at 2,900 barrels per day at the end of 2021 compared to the full-year average of just 1,800 barrels, placing it in a stronger position to benefit from higher oil prices.

Petrofac shares are currently testing all three moving averages, which have converged around the 118p-119p mark. The immediate test is to hold the 118p closing-floor that appears to be the level that has attracted buyers back into the market during the last three sessions. Any break below here reopens the door first to the 108p level of support seen throughout December and then the 2022 closing-low of 104p.

The recent move higher has pushed the RSI into bullish territory, and this is supported by the fact the 10-day average volume at time has increased versus the 20-day – although this remains below the 100-day average. A sustained move above the 100-day sma at 119.6p is needed to encourage a move higher, with the initial target being the 135p level of resistance and support seen in January before it can target the 2022-high of 154p. 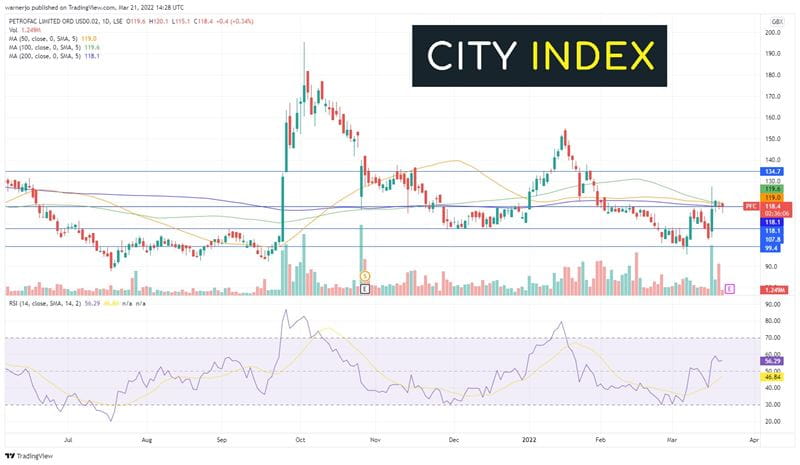 How to trade Petrofac shares

You can trade Petrofac shares with City Index in just four easy steps: