Harbour Energy 2021 preview: Where next for the HBR share price?

When will Harbour Energy release 2021 earnings?

Harbour Energy is scheduled to publish full year results for 2021 on the morning of Thursday March 17.

2021 marked the start of a new era for Harbour Energy, which was admitted to trading at the start of April 2021 following the merger of Premier Oil and Chrysaor.

Harbour Energy said in early December that it expects to report production of around 175,000 barrels of oil equivalent per day in 2021. That will be the midpoint of its 170,000 to 180,000 barrel guidance, which was downgraded from an initial goal of 185,000 to 200,000 barrels. The two businesses were producing the top end of that original goal when the merger was completed.

Investors will be expecting production to have ramped-up in the second half of the year after the company said it was producing the equivalent of 215,000 barrels per day during October and November, setting a buoyant tone that output will be considerably higher in 2022 to allow it to fully capitalise on higher oil prices.

Harbour Energy has said it is aiming to produce 195,000 to 210,000 barrels per day in 2022, with growth coming from new production from its assets in the UK North Sea and Vietnam as well as 15,000 to 20,000 barrels daily from its new Tolmount gas project that is expected to have come online during the first three months of 2022.

The fact it only cost the company around $16 to produce each barrel in 2021 means the company is in prime position to reap profits in the current environment. However, that will also be just above its $15 target. Production costs are expected to remain broadly flat this year.

Analysts are expecting Harbour Energy to report revenue of $3.55 billion and a pretax profit of $762.9 million in its first set of annual results.

The company ended 2021 with net debt of around $2.3 billion to $2.4 billion and leverage remains at suitable levels at just 1.0x. Harbour Energy has said the business could be debt free by 2025 as it expects to generate enough cash to pay dividends, invest in the business and pay down debt over the next few years, while also giving it the ability to undertake M&A if a suitable target appears on its radar. Notably, media reports suggest oil giant Shell is preparing to sell its stakes worth up to $1 billion in a number of fields in the Southern UK North Sea. Some of Harbour Energy’s existing assets in the region were bought from Shell, highlighting it as a potential buyer.

The company said it generated around $500 million to $600 million of free cashflow in 2021. The company said it expects cashflow to be ‘materially higher’ in 2022 thanks to higher oil prices and increased output. Analysts currently believe Harbour Energy can grow revenue by 28% in 2022 and more than double pretax profit. Cashflow should be further enhanced by the significant synergies that are still to be delivered from the merger, although countered by a higher capex budget of $1.3 billion in 2022 from the $1.1 billion spent in 2021.

Harbour Energy introduced a new dividend policy earlier in 2021 and said it is distributing $200 million through a 16.0 pence dividend going forward, starting with a final dividend of 8.0p, worth $100 million in total, for 2021 that will be paid in May 2022.

Harbour Energy shares have traded in wide channel since being admitted to trading at the start of April 2021 and the stock continues to drift above and below all three moving averages that have converged around the 373p to 371p mark. They should be treated as the initial floor for the stock going forward but a move below there opens the door to the 2022-low of 326p.

The fact the 50-day sma has recently returned above the 200-day sma for the first time in eight months and is on the cusp of moving above the 100-day sma provides a bullish signal for the stock, reinforced by the bullish RSI. They are both supported with the fact trading volumes have steadily risen over the past 100-days, with a notable spike in the 10-day average volume at time. A close above the March-high of 399p would install confidence of a move higher but it needs to break above 434p to escape out of the channel it has been stuck over the past year. 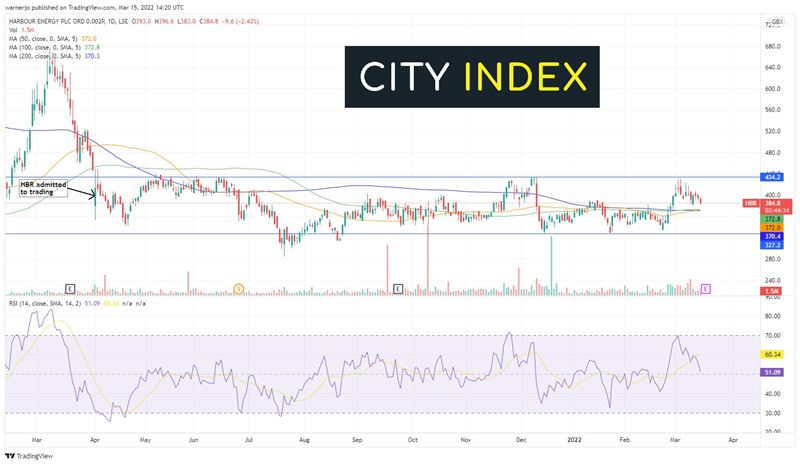 Brokers remain extremely bullish on Harbour Energy with 9 of them rating the stock as a Strong Buy and assigning a target price of 561.1p – some 44% above the current share price.