Ashtead Q4 earnings preview: Where next for the Ashtead share price?

When will Ashtead report Q4 earnings?

Ashtead is scheduled to publish fourth quarter and full year results covering the 3-month and 12-month periods to the end of April 2022 on the morning of Tuesday June 14. The company will hold a live webcast of its presentation to investors and analysts at 0930 BST.

Analysts forecast that Ashtead will report fourth quarter revenue of just under $2.00 billion, up some 57% from the year before. Adjusted EPS is expected to jump 74% to $0.68.

For the full year, Ashtead is forecast to report a 57% rise in revenue to $7.89 billion and an 82% rise in adjusted EPS to $3.02. It is worth noting that both sales and profits will be flattered by weaker figures from the year before, when Covid-19 caused both metrics to decline for a second consecutive year. Still, revenue and earnings are both set to come in well above what Ashtead was reporting before the pandemic erupted.

Ashtead, the equipment rental giant that trades under the Sunbelt brand and operates across the UK, US and Canada, raised its full year expectations when it released third quarter earnings back in March. The company said it was benefiting from ‘unique market circumstances’ including ‘supply chain constraints, inflation and labour scarcity, which we believe to be ongoing drivers of structural change.’

Demand for equipment has rebounded after suffering during the pandemic, and the widespread supply chain disruption means availability is lower than usual and pushing up prices to their highest level in years.

That means rental revenue, which accounts for the bulk of its overall revenue, is set to grow 19% to 21% over the full year, with free cashflow set to remain within the previous range of $900 million to $1.1 billion.

Below are revenue and earnings expectations for the full year by each region, as per consensus numbers from Bloomberg:

Ashtead makes most of its sales and profits in the US, so this will be the main focus over the smaller operations in Canada and the UK.

The company’s US operations have been outperforming the wider market this year, which Ashtead has put down to its increasing focus on specialty businesses that have been growing sales at a faster rate than general rental stores. This has allowed it to broaden its end markets and widen its appeal to more people.

In the UK, Ashtead has said its core business has been performing strongly, allowing it to wean itself off the Covid-19 support work it was doing for the Department of Health now that the pandemic has eased. With Covid-19 work accounting for just under one-third of overall revenue in the first nine months of the financial year, Ashtead is set to lose a large chunk of income now that all restrictions have been lifted.

The strong sales growth in Canada this year has been largely down to depressed figures during the pandemic the year before, but it is now benefiting from the restart of productions by the film and TV industry, with Ashtead supplying the likes of staging and lighting equipment.

Its rapid expansion by making bolt-on acquisitions of smaller chains has been geared toward North America, where it has spent some $938 million on 21 acquisitions that has allowed it to open 81 new stores during the first nine months of the financial year. That is likely to have comfortably topped the $1 billion mark once deals in the fourth quarter are taken into account. Meanwhile, a further $1.7 billion has been poured into improving existing sites and building new greenfield locations.

Ashtead has said it plans to ramp-up capital expenditure in order to ‘take advantage of strong market conditions’. Having already raised its budget for the recently-ended financial year to $2.5 billion, Ashtead has said this will rise to $3.2 billion to $3.4 billion in the year to the end of April 2023 and that it will continue to funnel most of its spending into its US operations.

Shareholder returns will also prove influential in how markets react to the update. Ashtead prioritises investment in expanding its store network and making bolt-on M&A before deciding how much to return through its progressive dividend policy and share buybacks. The ultimate sum returned will largely depend on its ability to stay inside its target to have net debt no greater than 1.5x to 2.0x annual Ebitda. Notably, this sat at the very bottom of that target range at the end of January, which should raise investor hopes ahead of the results.

Ashtead shares more than quadrupled in value between bottoming-out in March 2020 after the Covid-19 crisis erupted to hitting fresh all-time highs last December, making it a standout performer during the pandemic as other companies had a tougher time bouncing back. In that same timeframe, the FTSE 100 index rose by a comparatively underwhelming figure of 40%.

However, the stock has been underperforming the wider market since then, having dropped some 38% since peaking in early December whilst the FTSE 100 has booked a 2.8% gain.

The recent rebound means Ashtead shares have returned above the 4,000p mark for the first time in over a month. This should be treated as the initial floor for the stock and could prove a key psychological level for traders. If it fails, the door will be reopened to the 3,695p level of support seen last month. Below there, 3,609p comes into play and this is a more important floor that must hold as Ashtead shares could swiftly collapse below 3,300p otherwise.

Ashtead shares have broken out of the downtrend that began in March but they need to recapture the 50-day moving average at 4,300p to provide a signal that it can gain ground. A sustained move above here could install confidence and allow the stock to quickly move back toward the 4,485p level of support seen in April. From there, the 100-day moving average at 4,678p comes back into the crosshairs. Notably, the 19 brokers that cover Ashtead are bullish on the stock with an average Buy rating and an average target price of 5,841.4p – implying there is over 43% potential upside from the current share price. 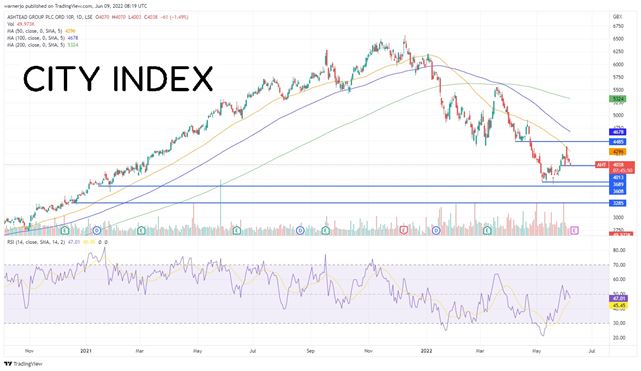 You can trade Ashtead shares with City Index in just four easy steps: