Nike Q3 preview: Where next for Nike stock?

When will Nike release Q3 earnings?

Nike is scheduled to publish its third quarter earnings after US markets close on Monday March 21.

There is a chance for Nike to surprise when it releases third quarter results depending on how it performed during the key holiday shopping season, having already beaten expectations on several occasions over the past two years. Wall Street forecasts revenue will rise 2.6% year-on-year to $10.6 billion.

In terms of products, analysts expect footwear sales will rise 2.4% to $6.66 billion in the third quarter, with apparel growing by 2.8% to $3.04 billion. Its Converse brand is also expected to report sales growth of over 5% year-on-year to breach the $600 million mark.

Nike’s gross margin is set to improve both year-on-year and sequentially to 46.5% in the third quarter. That is being driven by the growth being delivered by its higher-margin Direct-to-Consumer division, which is expected to see revenue jump 14.5% in the quarter to $4.5 billion from just under $4.0 billion the year before. Online is also contributing and is forecast to see sales jump 22.6% in the period.

Investors are hopeful that larger inventory levels will have meant it was well-stocked for the busy shopping season and able to mitigate disruption being caused to supply chains. Still, inventory remains constrained, but that also means Nike is running fewer promotions and making more profit on each item it sells, although this will be partly countered by rising logistical and freight costs.

Covid-19 is the main problem, with some Asian countries including China taking a stricter stance toward the virus than western countries that are starting to learn to live with it. A recent outbreak in Shenzhen – a key production hub for global tech and retail markets – has plunged millions into lockdown and caused factories to close and this will remain a threat to Nike going forward, although the firm has largely managed to navigate the tough environment so far. Just under one-fifth of Nike’s products are made in China, making it the second most important country for supplies after Vietnam.

Notably, Nike described the supply challenges as ‘short-term’ back in December and investors will be keen to see if this is still the case following the latest lockdowns being imposed.

The virus has not only hit supplies but also demand in China. Nike delivered strong sales growth in the first half of the financial year in North America (+14%), EMEA (+10%), and in Asia Pacific and Latin America (+9%), but sales in China were down 6% thanks to lockdowns and a slowdown in consumer spending.

Sales in China accounted for almost one-fifth of total sales in the last financial year. China will therefore remain central to the outlook going forward and Nike’s primary job will be to alleviate concerns that this will weigh on both supplies and sales going forward. Wall Street believes it will be a similar picture in the third quarter sales with the consensus pointing toward an 8% decline in sales in China while sales are set to grow 3% to 4% in EMEA and APLA and over 8% in North America.

Where next for NKE stock?

Nike shares have slid over 27% since the start of 2022 and recently hit their lowest level since September 2020 at $166.75, but that appears to have been low enough to attract buyers back into the market.

Although the stock has since found higher ground, indicators suggest it is still coming under pressure and the current downtrend remains intact. The 50-day sma remains well below both longer-term moving averages, and the fact the 100-day has just sank below the 200-day only reinforces this. The RSI also remains in bearish territory and trading volumes have steadily increased over the past 100 days. The $166.75 low now needs to hold to prevent the stock finding lower ground. If it doesn’t, we could see shares experience a heavy fall closer to the $110 mark, in-line with the level of support seen in August and September 2020.

Having bounced higher yesterday, investors are waiting to see if this is the start of a reversal. One metric to watch is trading volumes that, if they continue to grow, could signal support for any uptrend that starts. A move above $130 would help install confidence that a move higher is on the cards, but it needs to recapture the March-high of $136.80 to confirm this. Beyond there, it can put the 50-day sma at $141.60 into its crosshairs before going on to target the 100-day and 200-day smas at around $155. 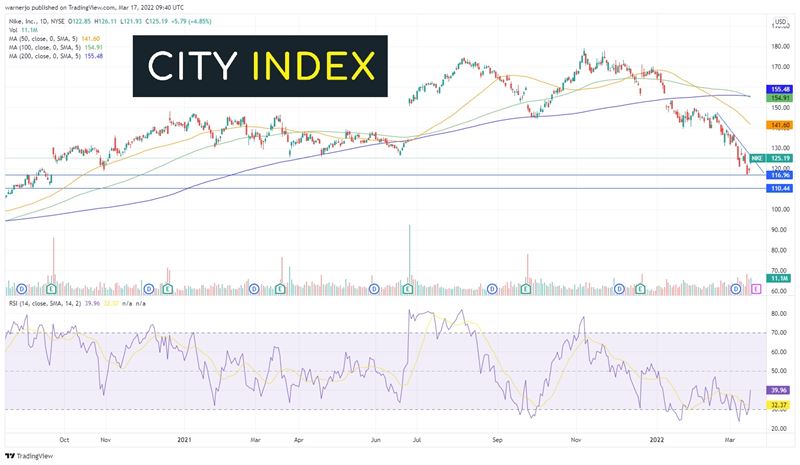 How to trade Nike stock

You can trade Nike shares with City Index in just four easy steps: