Delta Q3 preview: where next for Delta Air Lines stock?

Despite rising demand, the airline industry is facing headwinds from inflation, fuel prices and labour shortages. As Delta Air Lines will be the first of the major US airlines to report, its earnings will provide key insights into the industry’s recovery.

Delta Air Lines (DAL) is expected to report its third quarter 2022 earnings on Thursday October 13th, before market open. It will hold a live conference call and webcast to discuss the quarter’s results at 10:00 (EDT), or 15:00 (BST).

It’s expected that Delta’s net income could reach $984 million. It has said its adjusted operating margin will be between 11% to 13% in the third quarter, due to the impact of rising costs, including labour and fuel.

After Covid-19 ground the airline industry to a halt, this summer saw leisure and business flights surpassing pre-pandemic levels. This has continued, and the predicted growth in Delta’s top line supports this, as the company has seen increasing demand for air travel, primarily from domestic and corporate travellers.

In previous quarters this year, Delta has attributed a lot of its growth to the increase in business travel volumes – which accounted for roughly a third of the company’s ticket sales in half-year 2022. That picture could well be the same in Q3.

Although the recovery for global business travel is expected to be slow, it is estimated to be back up to 84% of 2019 volumes by the second half of 2022, according to a Morgan Global Corporate Travel Survey. And with such a large business travel exposure, Delta could be in a better position than some of its peers to benefit from those tailwinds.

While the surge in demand has boosted the top line, Delta Air Lines stock is still down 29% in the year to date. That’s because investors remain cautious about the airline industry’s prospects as it faces an array of challenges – such as capacity issues, labour shortages, rising costs, higher debt levels and concerns over the upcoming recession.

Fuel costs alone are also predicted to make a $3.3 billion dent in Delta’s balance sheet as they rise 79% per average seat mile (ASM), and costs per ASM excluding fuel are expected to rise by 22.5% from 2019. Meanwhile, Delta expects capacity to be down between 15-17% compared to pre-pandemic levels this quarter, as air demand continues to rise amid severe labour shortages and operational hurdles at airports.

The key objective for this year for companies like Delta is just to remain in the black as these costs eat away at their profits.

So far, airlines have been passing a lot of rising costs along to passengers, which has offset some of the damage to bottom lines and provided enough profit to pay down debts. But as the economy slows down, this strategy could need some thought as company margins are squeezed from both ends – with lower fares due to falling demand and rising costs.

Compared to its rivals though, Delta does have comparatively lower debt levels, which have helped to keep it in the black this year. And the company is hoping to reduce its debt by $5 billion by 2024.

Delta has said paying off this debt and restoring financial foundations are the priority for the business, and so it will not be rushing to resume stock buybacks after the Congress-imposed ban expired last month – despite pushing back on plans to extend the ban.

Where next for Delta Air Lines stock?

Delta Air Lines has shed 27% in value since the start of 2022 and remains less than half as valuable than it did before the pandemic hit in early 2020.

The stock appears to have found a new floor at $29.25 over the past week, in-line with the level of support seen in June and July to make this the initial downside level of support to watch. The tiny body of yesterday’s candle has resulted in a long-legged doji to suggest neutrality in price and indecision from both buyers and sellers. Any drop below here would bring the two-year low of $28 back into play.

Equally, the stock has tried and failed to break above $30.90 during the past week, making this the first upside target. From here, it can target the 50-day and 100-day moving averages before eyeing a move above $34 and then the August-high of $35.80. Looking at the weekly chart, we can see a downtrend that can be traced back to early 2020 remains in play. The 100-day moving average, at just under $40, is aligning with the downtrend to suggest this is the next upside target for the stock. 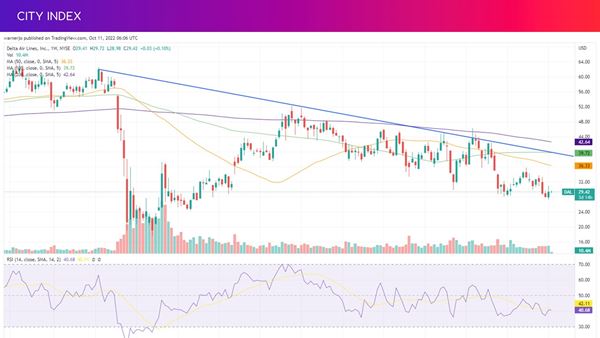 Notably, the 19 brokers that cover Delta Air Lines see even greater upside potential with an average target price of $48.40, implying it can rally over 64% from current levels. However, that has been declining in recent months considering this sat at over $52 just three months ago.