Coinbase Q4 preview: Where next for COIN stock?

When will Coinbase release Q4 earnings?

Coinbase shares have lost almost half of their value since posting its last set of quarterly results in early November, when it missed expectations thanks to a severe slowdown in trading activity in the crypto market thanks to less volatility. That has also tracked the declines seen in major cryptos such as bitcoin and Ethereum.

The volatility of the crypto market feeds through to Coinbase. The company stressed that Coinbase is ‘not a quarter-to-quarter investment, but rather a long-term investment in the growth of the cryptoeconomy’, signalling that markets can expect more wild swings in activity and performance in each quarter depending on what’s happening with bitcoin, Ethereum and the swathe of other crypto assets it is constantly adding to its platform.

With this in mind, Coinbase is expected to deliver a better performance in the fourth quarter.

Coinbase reported a significant fall in Monthly Transacting Users (MTUs) at the end of September of 7.7 million from 8.8 million at the end of June, but Wall Street believes this will have recovered in the final three months of 2021 to end the year at 9.9 million.

The sequential fall in trading volumes in the third quarter was responsible for Coinbase missing revenue expectations in the third quarter but activity is forecast to have rebound in the fourth, which should see a large quarter-on-quarter jump in transaction revenue that makes up the bulk of its income. Bitcoin and Ethereum surged higher during the first six weeks of the fourth quarter but have been under pressure and trending lower since early November, providing more volatility for markets to play with.

Its newer subscription model is proving more reliable and continues to grow at a steady rate and now accounts for around 10% of revenue. This is the key to Coinbase diversifying and sourcing more stable income to help counter the volatility in trading volumes. The company has said the growth in subscriptions and services is ‘an indicator that crypto is moving into the utility phase’ and is helping steer users to investment products within its portfolio such as Staking, Earn and Coinbase Card.

Investors will also be keen to hear about newer initiatives that may be able to provide fresh catalysts for the company, including its peer-to-peer NFT marketplace and the launch of Coinbase Prime to institutional investors.

In terms of earnings, Coinbase is expected to report improved figures on both a quarter-on-quarter and year-on-year basis in the final three months of 2021

For the full year in 2021, Coinbase has said MTUs are expected to average somewhere between 8.0 million to 8.5 million and that each of these users will have spent on average a sum in the ‘high $50s’ per month throughout 2021, up from the $34 to $45 range it has become accustomed to during the last two years. Coinbase is forecast to report $3.69 billion in annual adjusted Ebitda in 2021 and $3.30 billion in net income. That will be a huge improvement from the $527.4 million in Ebitda and the $322.3 million net profit reported in 2020.

Coinbase has provided guidance on a quarterly basis so far and should give markets an insight into what to expect in the current quarter. Wall Street currently believes transaction revenue will drop to around $1.47 billion in the first three months of 2022 and that adjusted Ebitda will suffer a fall to $717.5 million as it comes up against tough comparatives from early 2021.

Coinbase shares peaked at $369 in early November but have fallen over 47% since releasing its disappointing third quarter earnings, also tracking the fall in the likes of bitcoin and Ethereum, to today trade just above $189.

The RSI remains in bearish territory and below its 14-day moving average, while the 50-day sma remains below the 100-day sma, supporting the view the stock has further room to fall. Shares retested $180 late last week, which also provided a level of support earlier this month, and this should be treated as the initial floor. A slip below here opens the door back up to the closing low of $170, which must hold to prevent the stock from hitting fresh all-time lows.

On the upside, Coinbase shares have struggled to stay above the 50-day sma, which currently sits at $199, for too long over the past three months. It needs to recapture this level to install confidence that it can find higher ground toward the 100-day sma at $234 in order to close the gap created when shares plunged lower in January. 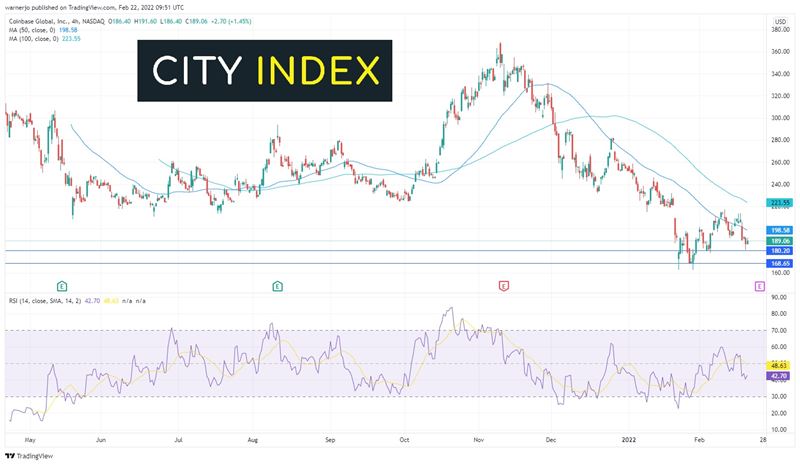