Blackberry Q4 preview: Where next for BB stock?

When will Blackberry release Q4 2021 earnings?

Blackberry will release fourth quarter and full year earnings covering the 12 months to the end of March 2022 after US markets close on Thursday March 31.

Wall Street forecasts that revenue will come in at $187 million in the fourth quarter. That would be 13% lower than what was reported the year before but also the highest quarterly sales figure of 2021. The firm is expected to report an adjusted loss per share of $0.04 after breaking even in the third quarter, and this will turn from a $0.03 profit the year before.

For the full year, revenue is forecast to drop 21% to $722.9 million and the company is set to sink to a $0.14 adjusted loss per share from the $0.18 profit booked in the previous year. Notably, that will be the first annual loss per share reported in six years.

The reason Blackberry has been pushed into the red and seen lower sales during the year is because the business is replacing old drivers with new. Revenue from licensing deals has plunged at a faster rate than Blackberry has been able to grow its cybersecurity and Internet-of-Things (IoT) businesses. That follows on from Blackberry’s decision to offload a large chunk of its portfolio of patents that it had previously licensed out, largely related to mobile phones, messaging and wireless networks. It continues to look for buyers for the remainder of its patent portfolio but has admitted this is taking much longer than anticipated and has cited its frustration at being unable to monetise those patents while the sale progresses.

With this in mind, analysts currently believe licensing revenue will plummet 79% over the full year and that cybersecurity sales will fall 7.8%. That will offset the strong 37% growth set to be delivered by the IoT division that is largely being driven by its technology designed for the automotive industry. Below is a breakdown of revenue by each division to demonstrate the trend of each one over the last two years, as well as the consensus numbers taken from Bloomberg for the fourth quarter and full year:

The key division investors will be watching is the IoT division, which is not only the engine of growth but also the most profitable part of the business with a gross margin of 81% in the last quarter. The IoT division, which counts the automotive and aviation markets as big customers, was hit hard during the pandemic so the rapid growth is being partly flattered by weak comparatives and fuelled by the gradual recovery in its end markets. Analysts expect the IoT unit to continue growing during the current financial year, albeit at a slower rate as its markets continue to be hit by several headwinds.

At the heart of the IoT division is the QNX business that provides commercial operating systems and digital tools used in vehicles. This has been gradually gaining momentum and being awarded more design wins. Blackberry said in the last quarter that demand was so strong that it was hiring more staff for QNX to expand its professional service team. Not only do design wins generate immediate revenue but lead to royalty income once the vehicles are in production and on the market. Existing royalty income is growing modestly but is being hampered by the disruption hitting the automotive industry that is grappling with supply shortages, Covid-19 disruption and rising costs. Blackberry has warned this will remain a headwind well into the current financial year but said things should steadily improve going forward.

Another potential catalyst going forward for the IoT unit is IVY, which is Blackberry’s cloud-connected software platform designed to facilitate the movement of data collected by sensors on vehicles, which is an increasingly important area as automakers push head with their hopes of delivering self-driving cars.

Meanwhile, the cybersecurity division has delivered uneven sales growth over the last two years, but its performance was strong in the last quarter and is revenue is set to hit its highest level in over a year in the fourth quarter, with analysts forecasting it will hit the top end of its guidance range. The competition in this space is intensifying as the need for security software heightens as businesses go digital, with Blackberry competing against players like CrowdStrike, SentinelOne, McAfee, Symantec and Microsoft. Blackberry is leveraging its connections to sell its cybersecurity products to automakers and has also said it will focus on small and medium-sized businesses as it believes there is a big untapped opportunity there. Blackberry says its Protect and Guard services are well-suited to SMEs because they are managed services that don’t require customers to have large security infrastructure.

Blackberry says it has three key advantages when it comes to cybersecurity. The first is its focus on preventing attacks rather than responding to them. The second is that its artificial intelligence is ‘the most mature in the market’, and the third is that it works both online and offline to ensure it continues to work even if it becomes disconnected from the cloud. Blackberry is also the biggest player when it comes to security for mobile phones and this will continue to be a key area going forward.

The recently-ended financial year should be regarded as one of transition for Blackberry, and one that should lead to more upside going forward. Wrapping-up the sale of its patent portfolio will help it draw a line under the old business and turn the focus onto its two growth engines, which both have strong fundamentals underpinned by the growing need for cybersecurity and the shift to smarter vehicles.

The outlook for the first quarter of the current financial year will play a large role in deciding how markets react to the update. Analysts currently believe the cybersecurity division will report 8% year-on-year growth in the three months to the end of June to $115.5 million and that the IoT unit will report 27% growth to $54.4 million.

Where next for BB stock?

Blackberry shares have rallied over 28% over the past eight trading sessions, having recaptured the 50-day sma and hitting its highest level in almost two months. The uptrend has been strong and is reinforced by the bullish RSI that also remains above its 14-day moving average. The next upside target is $8.35, which emerged as a ceiling in late January and early February and sits roughly in-line with the 100-day sma. Beyond there, it can target the 200-day sma at $9.70, in-line with a key level of resistance seen last December.

However, it is worth noting that average trading volumes have declined over the past 5-days compared to the 10-day average, suggesting the uptrend could be running out of steam. Both measures are also well below the 100-day average.

Blackberry shares gradually drifted lower over four months before finding a floor after hitting a 16-month low of $5.80 in February, which came back into play this month before the recent uptrend started. This should be treated as the ultimate floor for the stock going forward to prevent bringing fresh multi-year lows back into play. However, we should see the 50-day sma, which currently sits at $7.30, provide more immediate support going forward. 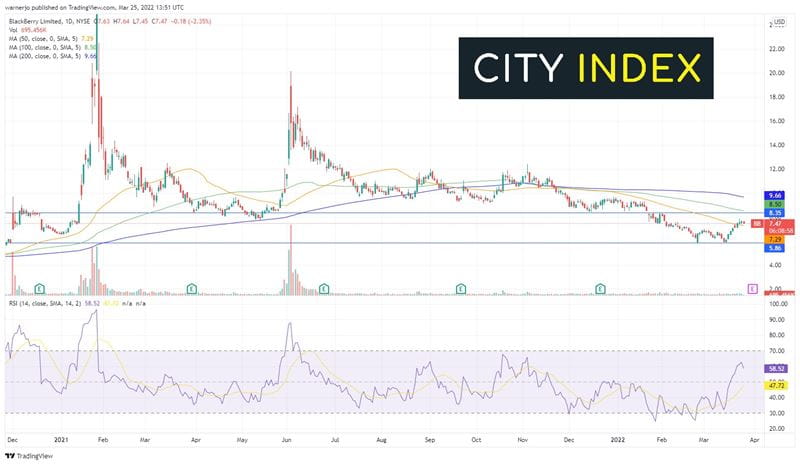 How to trade Blackberry stock

You can trade Blackberry shares with City Index in just four easy steps: