BlackBerry Q1 preview: Where next for BB stock?

When will BlackBerry release Q1 earnings?

BlackBerry is scheduled to release results for the first quarter covering the three months to the end of May after US markets close on Thursday June 23.

BlackBerry is forecast to report a 6% decline in revenue in the first quarter to $163.5 million. Analysts believe it will report an adjusted loss per share of $0.05, level with what was reported the year before.

This is set to be the seventh consecutive quarter of lower revenue for BlackBerry, with the drop in the first quarter exacerbated by the loss of licensing revenue after freezing patent sales whilst it tries to offload the non-core parts of its portfolio. As a result, licensing revenue is forecast to be down some 79% from last year at just $5 million.

The company struck a deal to sell virtually all its non-core patents to Catapult IP Innovations for $600 million and was hoping to close this in the first quarter, but BlackBerry warned earlier this month that it is taking longer to complete because Catapult is still trying to secure the finance it needs to purchase the patents.

‘Catapult continues to work on securing its required financing and BlackBerry looks forward to the completion of the Patent Sale Transaction. However, BlackBerry is no longer under exclusivity with Catapult and, given the length of time that the transaction has taken, BlackBerry is exploring alternative options in parallel,’ said the company on June 1.

There is unlikely to be any positive news on the patent sale considering that statement was issued less than three weeks ago. However, with BlackBerry shares having lost over 9% in value since warning that the deal had stalled, this could become a catalyst for the stock if the Catapult deal does go through or an alternative one can be found.

On a more positive note, BlackBerry’s smaller Internet-of-Things (IoT) division, which includes its security software to protect devices and the data that flows through them, is forecast to report a 17.5% jump in revenue in the first quarter to $50.5 million. Meanwhile, sales from the Cybersecurity division, which offers a complete end-to-end cybersecurity service to businesses focused on prevention, are expected to come in flat from last year at $107.0 million.

Ultimately, the loss of licensing revenue is what will weigh on the company this quarter, while growth in cybersecurity will be held back as BlackBerry continues to struggle to invest at the same rate as its rivals – a problem it is trying to address.

Over the longer-term, BlackBerry’s position in the automotive market, spearheaded by the use of its QNX operating system in smart and autonomous vehicles and the IVY connected vehicle platform, offers further potential as the industry recovers after being hammered by pandemic-induced disruption and supply chain woes, although this will depend on how they manage inventory as they attempt to protect margins and keep prices competitive amid rampant inflation.

BlackBerry unveiled new long-term targets last month that said the firm would see earnings and cashflow come under pressure in the current 2023 financial year as it ramps-up investment to catch up with rivals but said this should allow it to breakeven in terms of EPS and cashflow starting in the 2024 financial year before turning positive in 2025.

Below is a table outlining its revenue targets over the coming years and the most recent annual result for comparison. Importantly, its outlook for the IoT unit excludes contributions from IVY, providing potential for BlackBerry to achieve its ambitions at a swifter rate.

In terms of margins, BlackBerry has said it is aiming to improve its adjusted gross margin by at least 100 basis points each year through to the 2027 financial year (having come in at 65% last year). It is also aiming to grow its adjusted operating margin to 20% by 2027 from minus 0.28% last year.

Where next for BB stock?

BlackBerry shares have plunged over 63% since peaking a year ago and have been stuck in a downtrend since last November.

The downtrend remains firmly intact despite a brief break above the trendline last month, bringing the $4.89 initial floor into play. The 18-month low of $4.70 should be considered a more important level as this needs to hold to avoid opening the door to fresh lows, first to $4.44 and then to the key level of resistance-turned-support seen during the initial months when the pandemic erupted at $4.27. Any move below here could see the stock sink back below the $4.00 mark. 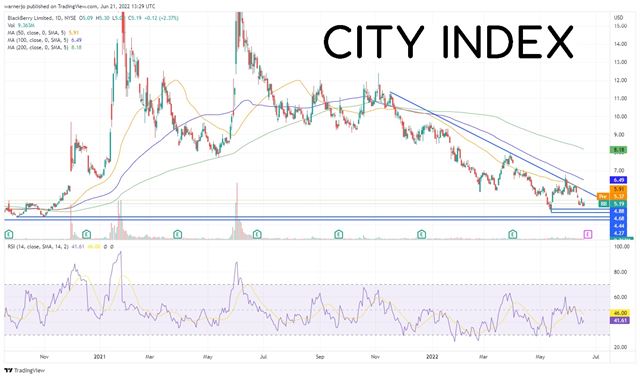 How to trade BlackBerry stock

You can trade BlackBerry shares with City Index in just four easy steps: