American Express Q1 preview: Where next for AXP stock?

American Express, also known as Amex, is scheduled to publish first quarter earnings before US markets open on Friday April 22.

Wall Street believes Amex’s revenues net of interest expense will rise over 28% year-on-year to $11.6 billion but forecasts diluted EPS will suffer its first fall in over a year and decline 12.7% to $2.39 as it comes up against extremely tough comparatives from the year before, when earnings soared over 568%.

Its largest division, the Global Consumer Services Group which is responsible for issuing a wide range of consumer cards around the world, is set to report a 17% increase in revenue to $6.2 billion but pretax profit is expected to decline almost 34% to $1.4 billion. This will be the toughest quarter of the year in terms of comparatives considering the division saw profits soar over 800% in the first quarter of 2021.

The Global Commercial Services unit that provides cards to corporations and small businesses is forecast to report a 25% year-on-year rise in revenue to $3.3 billion and post a mild 3.2% rise in pretax profit to $686.2 million.

The Global Merchant and Network Services division, which runs the company’s global payments network that processes and settles card transactions while providing a slew of services from marketing to data analytics to merchants, is expected to report a 13% rise in revenue from last year to $1.4 billion and see pretax profit increase 19% to $490.8 million.

It has also raised its quarterly dividend by 20% starting in the first quarter to $0.52 from $0.43, which has already been declared and will be paid on May 10 to those shareholders on the register on April 8.

‘Longer term, as the economy reaches a steady state, our aspiration is to achieve revenue growth in excess of 10% and EPS growth in the mid-teens,’ Amex said in its last quarterly update in January.

Where next for American Express stock?

American Express shares are showing strong signs of a reversal since rebounding from the latest leg of its downtrend over the last week.

The stock has rallied higher for four consecutive sessions and needs to break above the $194 ceiling to demonstrate it can set higher highs and higher lows. The RSI has recently moved into bullish territory to suggest the stock can find higher ground and the 50-day moving average continues to rise away from the longer-term moving averages. Notably, the 29 brokers that cover the stock believe it can climb to $201 over the next 12 months, which would mark a new all-time high.

However, average trading volumes have slumped over 9% during the past five sessions compared to the 10-day average and that is down over 27% compared to the 100-day average, implying momentum has waned as it has pushed higher over the last week. On the downside, the low of the last leg downwards at $174, broadly in-line with the 200-day sma, should be treated as the initial floor that needs to hold to avoid opening the door to sub-$172. 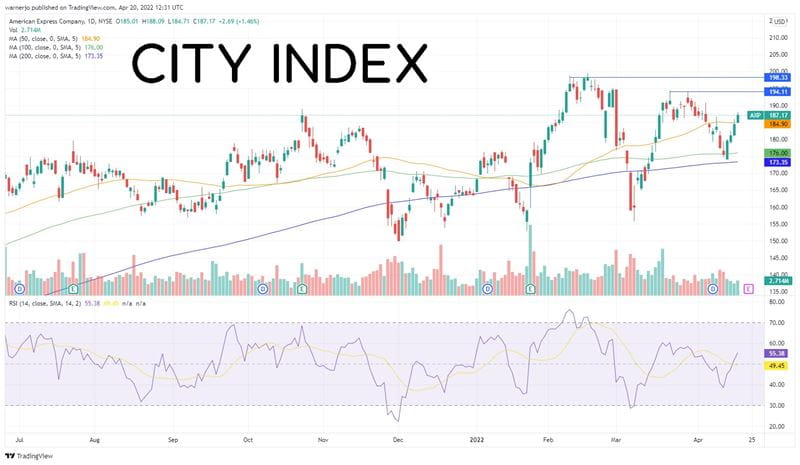 How to trade Amex stock