What to do about Bitcoin

As equity, FX and bond markets traded in a holding pattern ahead of the start of tomorrows G20 meeting; it was left to Bitcoin to make headlines again. For the first time since January 2018, Bitcoin traded to near the $14k resistance level after rallying over 75% from its lows earlier this month.

As regular readers would know we turned bullish Bitcoin earlier this year when Bitcoin was trading below $4k with an expectation that Bitcoin would rally towards $8k. In a subsequent article we went on to note that while there appeared to be the potential for the rally to exceed $8k, the original trade plan was followed, and profit was taken on the balance of the long Bitcoin position during near $8k.

Since that point, the plan has been to rebuild longs in Bitcoin on a corrective pullback. However, apart from a very shallow pullback in early June, its all been one-way traffic of late.

Bitcoin has surged on the back of flight to safety buying ahead of this weekend’s G20 meeting and increasingly aggressive rhetoric between Iran and the U.S. Growing optimism that Bitcoin is moving closer to mainstream acceptance after Facebook launched its digital coin Libra in partnership with Visa, Paypal and others has also aided the rally.

That said there is some evidence that the rally in Bitcoin has gone far enough for now. Technically, there is a strong layer of resistance between $13.5k and $14k, including the 61.8% retracement from the December 2017 high at 19666 into the December 2018 low at 3122.

Initial signs of rejection from this level have emerged which appear to have followed overnight comments from Treasury Secretary Mnuchin in which he said “there’s a path to complete (a trade deal)” in reference to Saturday nights meeting at the G20 between Presidents Trump and Xi.

In short, I continue to wait patiently for a corrective pullback to re-enter Bitcoin longs, ideally back towards support near $10/9k. However, should Bitcoin break/close above $14k it would confirm the next leg of the rally towards $17k has commenced, and extend my wait just a little longer. 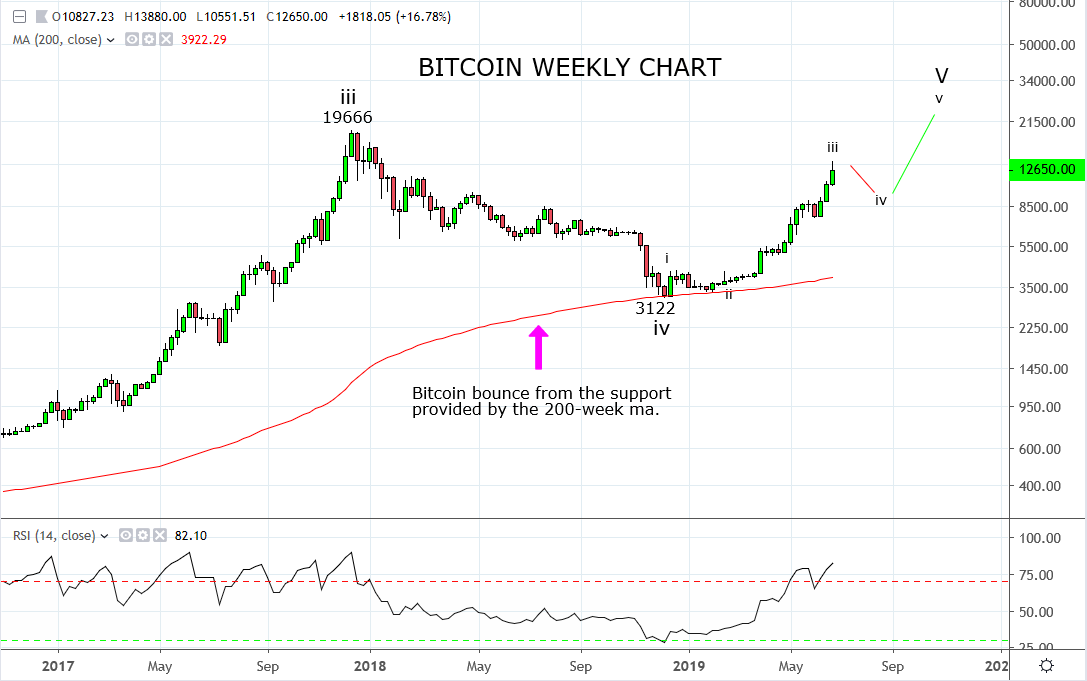 Source Tradingview. The figures stated are as of the 27th of June 2019. Past performance is not a reliable indicator of future performance.  This report does not contain and is not to be taken as containing any financial product advice or financial product recommendation

Bitcoin: Is the regulatory shoe about to drop on crypto?
By:
Matt Weller CFA, CMT

Bitcoin dives as Bitcoin 2022 kicks off
By:
Tony Sycamore

Ethereum 2.0: what is it and when is the Ethereum 2.0 release?
By:
Rebecca Cattlin