After Monday’s rebound, the US dollar has started Tuesday’s session on the backfoot, although it remains to be seen whether the bears have much conviction in this down move. The bulls could step back in after Monday’s large recovery raised some hope that the recent weakness had ran its course. The USD/JPY is one of the more interesting dollar pairs to watch in this data-light session, as it tests a key support level.

Monday’s greenback recovery was supported by a rebound in US bond yields, which have fallen back today, after the publication of some more stronger-than-expected macro pointers following Friday’s stronger jobs and wages data. Factory orders surged by more than expected, rising 1% month-on-month, while the closely-followed ISM services PMI came in at 56.5 compared to 53.3 expected and 54.4 last.

There are no notable US data scheduled for release today. But the recent trend of stronger data has seen some investors re-question the market pricing of the terminal interest rates in the US, currently priced in at just below 5%. If incoming data continues to remain favourable, then inflation is likely to persist longer and that may encourage the Fed to be even more reluctant to pause its hiking early in the first half of 2023.

As we have been banging on about it, the USD/JPY has bounced back sharply in the last few trading sessions, although it was down again when this report was being written. However, the popular currency pair was testing a key support level around 136.00. This level was the high from Friday, which was taken out on Monday. 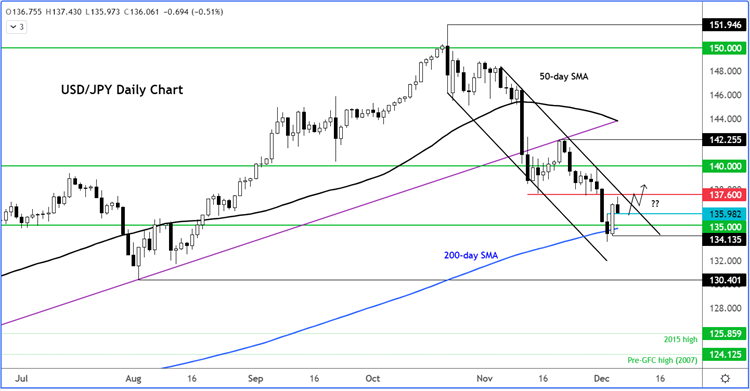 Thus, if Monday’s reversal was a genuine one, then I would expect the bulls to step in and defend their ground here, potentially leading to a move towards the next level of resistance around 137.60, which was the base of the recent breakdown.

In terms of the slightly longer-term outlook, a closing break out side of the bearish channel is needed in order to tempt more bulls to come back and trade this pair long, after it successfully held above the 200-day average at 134.50ish.

From a macro perspective, the long-term trend on the USD/JPY remains bullish. Its more recent weakness was driven by investors reducing their high expectations about the future growth in policy divergence between the US and Japan. Signs of inflation potentially peaking and the Fed dialling down its hawkish rhetoric has seen the markets reduce their expectations of terminal interest rates in the US. But the Fed’s policy remains in contractionary mode, while the BoJ maintains its extremely dovish stance. This should mean the downside risks will be limited for the USD/JPY moving forward, as long as the BoJ does not materially change its policy settings.