USD/CAD reaches highest level since May 2020!

Last week, Canada released its Employment data for September.  After 3 months of negative prints, the Employment Change finally showed an increase of 21,100 jobs. Not only that,  but 5,700 of the jobs were full-time jobs!  This was also the first time in 3 months that the print was positive.  By the way, the Unemployment Rate decreased from 5.4% to 5.2%.  Strong  jobs data all around.  Like the Fed in the US, this should give the BOC confidence when hiking rates.  Also last week , BOC Governor Macklem said in a speech that “We have not seen clear evidence that underlying inflation has come down. When combined with still-elevated near-term inflation expectations, the clear implication is that further interest rate increases are warranted.”  The Bank of Canada meets again on October 26th and markets are pricing in a 50bps rate hike.

With good jobs data and hawkish comments from the Bank of Canada Governor, one may expect that the Canadian Dollar would be strong vs the US Dollar. However, the US is in the same boat as Canada regarding inflation, and traders have continued to see the US Dollar outperform its Canadian counterpart.  USD/CAD has been rising in an upward sloping channel since early April when the pair reached a near-term low of 1.2498. On September 21st, USD/CAD broke above the channel near 1.3400 and has been consolidating just under resistance from April 2020.  On Tuesday, USD/CAD traded at its highest level since then at 1.3855!  Notice that the RSI pulled back from recent highs, which allowed the RSI to unwind back into neutral territory.  This may give bulls optimism that the pair can push through resistance. 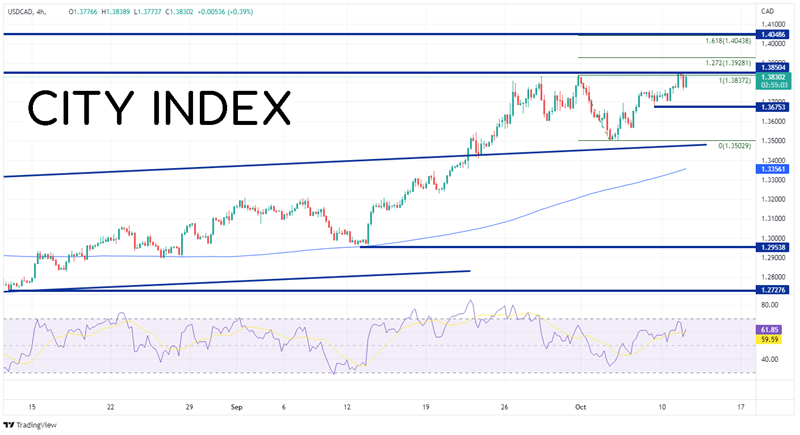 Will USD/CAD take out the immediate resistance and continue higher?  Not only will it depend on how hawkish the BOC remains, but it also may depend on what the DXY does!