It’s not a secret that inflation has been high in the US.  US CPI and Core CPI has been on the rise for months.  Today, the US released what is considered to be the Fed’s favorite measure of inflation for February, Core PCE (Price Consumption Expenditure) Price Index.  The print was 5.4% YoY vs 5.2% YoY in January.  Although this was a touch weaker than the 5.5% YoY expectation, it is still the highest level since April 1983.  It should be noted that the headline PCE Price Index was 6.4% YoY vs 6.0% YoY in January.  This was the highest level since February 1982.  In addition, Personal Income for February was 0.5% MoM vs 0.1% MoM in January, while personal spending took a dive, up only 0.2% MoM vs 2.7% MoM in January. One has to consider how much of an impact rising prices played in the lower personal spending print.

NZD/USD has been trading in a long-term downward sloping channel since the beginning of 2021, when prices reached a high of 0.7465.  On January 26th, price posted a false breakdown below the bottom of the channel and reached a low of 0.6507.  Since then, NZD/USD has been moving higher and it’s currently trading near the 61.8% Fibonacci retracement level from the highs of October 29th, 2021 to the low of January 26th, near 0.6950. Yesterday, price briefly rose to the psychological round number resistance of 0.7000 before retreating today.  The top trendline of the long-term channel comes in just above near 0.7045 and acts as the next level of resistance.  If price trades above the channel line, horizontal resistance is at 0.7073.  Above there NZD/USD has room to run up to the October 29th, 2021 highs at 0.7224. 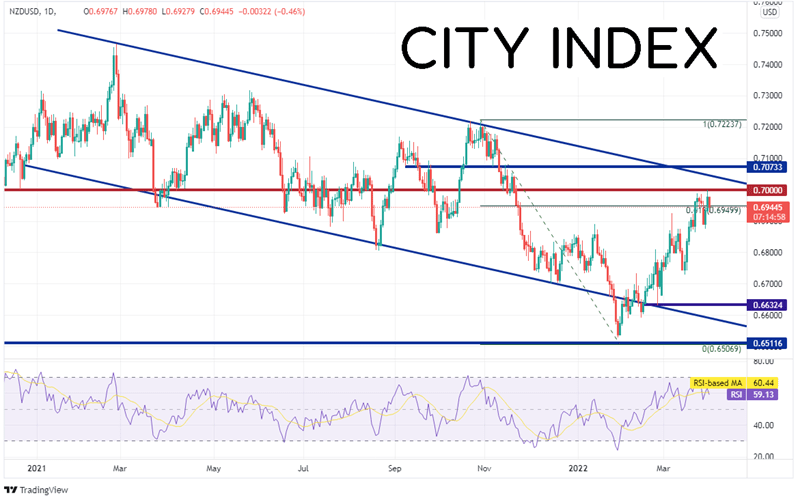 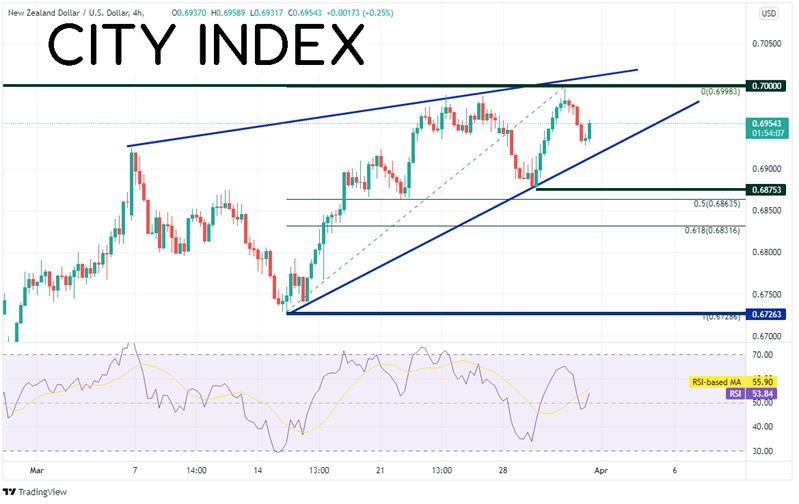 As the Fed continues to catch up with the rest of the markets in realizing that inflation is indeed high, it now has another data point to refer to, Core PCE.  The Fed doesn’t meet again until May.  However, one has to consider the odds that the Fed may hike 50bps at the meeting, or possibly even hike inter-meeting!