Summary of the RBA’s minutes – considerations on monetary policy

The RBA continued to give themselves plenty of wriggle room for forecasting errors, with the words ‘uncertain’ or ‘uncertainty’ sprinkled through their minutes seven times. Of course, they tipped their hat to high levels of inflation alongside a tight labour market and tight labour market, whilst adding that medium-term inflation expectations and wage prices continue to point towards inflation returning to their 2-3% target.

But it’s what they don’t say which makes the difference, as the minutes no longer reference the 25 vs 50bp hike debate as “finally balanced”. They hiked by 25, have hinted at a pause – and the reference to larger increases ‘if warranted’ is simply a scenario to consider if medium-term inflation expectations and wages pick up. And as they’re concerned with the policy lag and its impact on household spending, the case for larger hikes doesn’t seem very strong.

Still, this leaves the potential for AUD to remain bid should Q3 wage data come in hot tomorrow. But with negative real wages and relatively low inflation expectations, I doubt it will be enough for a 50bp December hike. And by how much the Aussie can rally is also down to whether US dollar bears have choked the greenback enough.

US producer prices will be closely watched tonight at 00:30 AEDT / 13:30 GMT, as any further signs of disinflation could weaken the US dollar – whereas a stronger print could shake out soe dollar bears at the lows. 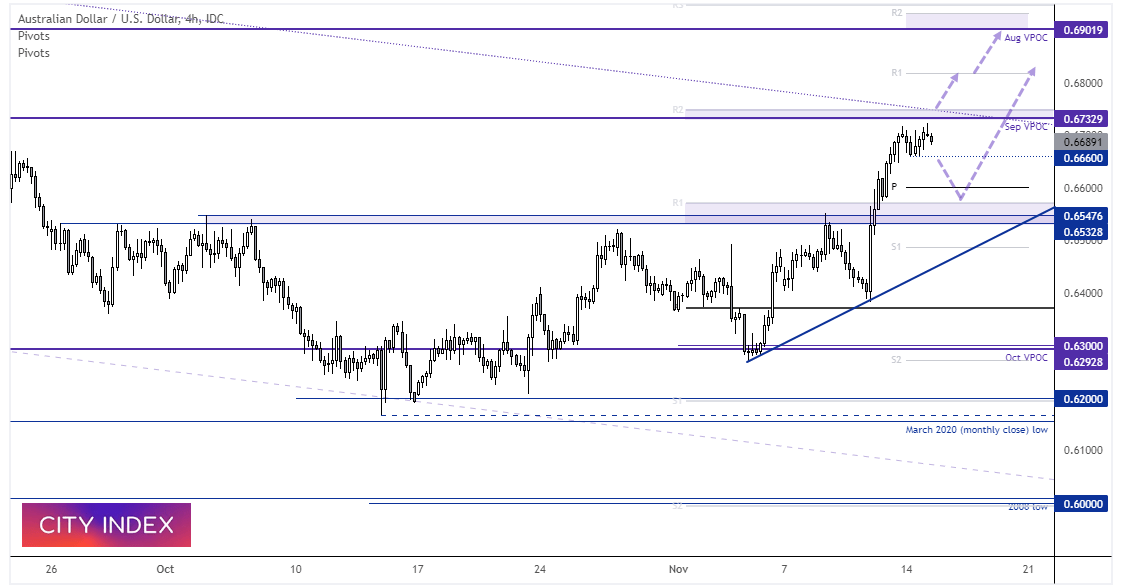 The Aussie has seen a strong move towards the 0.6700 area, and its rally has stalled just below the September VPOC (volume point of control), monthly R2 pivot point and bearish trendline. This leaves the potential for a pullback towards the weekly pivot point, which would be confirmed with a break below 0.6660. Yet as the trend remains strong the bias is for an eventual break above the resistance zone and move towards 0.6800 and 0.6900.