In this week’s edition, we are getting technical on the EUR/USD, S&P 500 and WTI crude oil. So, there’s something for everyone.

EUR/USD selling pauses at 1.05 ahead of US CPI

After breaking the March 2020 low at around 1.0635 at the back end of April, the EUR/USD spent the first week of May consolidating below this level. It formed a small doji candle there, as dip buyers attempted to defend the psychologically-important 1.05 handle but lacked conviction to cause a reversal in the bear trend. The doji candle points to indecisiveness, which is hardly a surprise after the Fed talked down the prospects of 75 basis point rate hikes: 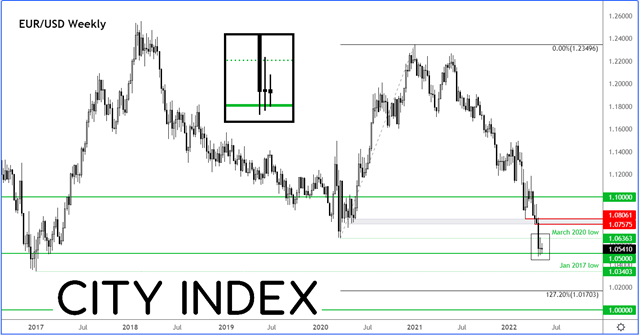 Nevertheless, the trend remains bearish and a clean break below 1.05 could see the EUR/USD take out the January 2017 low at 1.0340 next, and maybe even go lower.

The bulls on the other hand will need a lot of wood chopping before they can take control of short-term price action. If they manage to push rates back above the March 2020 low, this would be a welcome sign for them, although they will then face further resistance around 1.0755 to 1.0805 range, an area which was previously support. Only a decisive break above 1.0805 would be deemed a bullish technical breakthrough, for that will completely undo the most recent breakdown.

Whether the abovementioned first line of support (~1.05) or resistance (~1.0635) breaks may be determined by the publication of Wednesday’s US CPI report.

The first half of Tuesday was all about the rebound we saw across risk assets, but I reckon there is a good chance we could see the indices turn lower because fundamentally nothing has changed. The fact that some bearish speculators who missed out on the big drop means they will be keen to step in, potentially once the S&P 500 index tests resistance in the 4061-4016 range, which was formerly resistance: 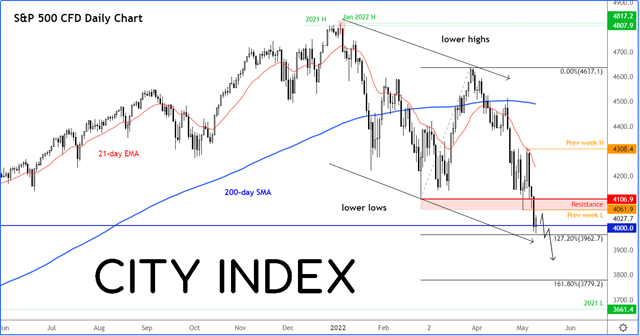 As well as the bears being eager to get a piece of the action, trapped bulls are even more eager to get out of their losing long positions, and so they may use this bounce as an opportunity to lighten up their long positions. This is because the S&P has been making lower lows and lower highs for much of this year inside a wide corridor.

More recently, the periods when the market has been in a recovery mode have shrunk while sell-off phases have steepened. This is a reflection of investor pessimism growing, as highlighted for example by the Nasdaq wiping out its entire 2021 gains following Monday’s sell-off. The S&P 500 has – for now – remained more than 8% above its corresponding 2021 low as at Monday’s close. That’s not to say it won’t eventually get there, but clearly highlights the fact that techs have been underperforming. The key question going forward is whether other sectors of the equity markets may also be dragged lower. Judging by recent price action, I wouldn’t bet against it. Lower is my call.

Crude oil may have finally topped out. I know that is a brave call to make and shorting oil is playing with fire given geopolitical risks etc. But the breakout from the triangle should have led to follow-up buying. It didn’t: 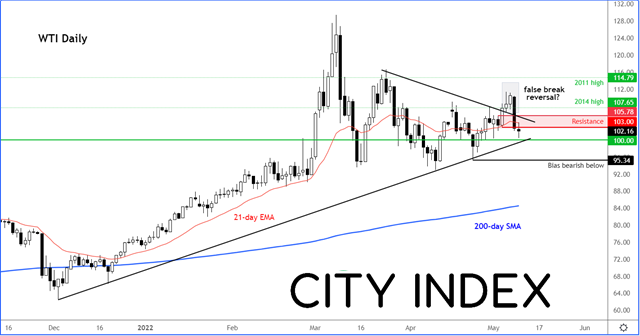 So, the idea here is that the breakout area between $103 to $105 will now turn into resistance, as those trapped longs rush for the exits. If they do, watch out for a potentially sharp breakdown as long side stops get tripped below the trend line and support around $100.00.

In the previous edition of the Technical Tuesday, we had covered the DAX, Gold and AUD/NZD. A week on, here are the before and after charts for those markets: