Stocks rise ahead of a busy week

By :
Fawad Razaqzada
,  Market Analyst
Sentiment has improved with European stocks and US futures on the rise first thing this morning, but with much of Europe on holiday, trading volumes are naturally thin, and the macro calendar is light. Things will get busier, with the RBA, ECB and US CPI all to come later in the week. But first, Boris is Johnson, the UK Prime Minister, is facing a key vote around 18:00 to 20:00 BST today. Will the positively last or will central bank tightening and inflation concerns come back to haunt investors?

Ahead of all that, the UK PM Bris Johnson is facing a no-confidence vote later this evening, which could prompt sharp moves in the pound and FTSE. Should Johnson lose, he will be forced to stand down as prime minister. But that requires at least 180 votes from his Conservative MPs, which may be a tall order – even if a growing number of Tories – including Jeremy Hunt – are turning their backs towards him. Indeed, with the GBP/USD and FTSE both being among the top risers in their respective fields this morning, it is clear that investors do not expect to see any surprises in the vote.

For now, investors are happy that China has moved to ease Covid restrictions, reducing concerns about demand from the world’s largest economy and largest consumer of many commodities. This is why the Shanghai Composite Index closed up nearly 1.3% overnight, as investors looked to add to the gains made during May. China’s gradual re-opening has boosted industrial metals such as copper, which has helped to boost shares in basic resources.

Central Bank tightening could come back to haunt investors

The focus is going to return to monetary policy this week, potentially weighing on optimism that has been trigged by China. So, will inflation and rate-hike concerns come back to rattle the markets?
The Fed remains the most hawkish of central banks out there, although others are also catching up. On Friday we saw a stronger-than-expected US jobs data for May. The data suggests the US Federal Reserve will continue its aggressive tightening to rein in price pressures.  Speaking of which, we will US CPI to look forward to on Friday, which is going to be the key data the week. US inflation edged a little lower in April to 8.3% but it remains to be seen whether prices have peaked. If CPI doesn’t come down fast, this could keep stocks under pressure as the Fed will have to continue with its aggressive hiking until price pressures come down meaningfully. The market is fully expecting another 50-bps increase in interest rates on June 15, and another similar hike in July. In fact, Cleveland Fed President Loretta Mester said she would even back a 50-basis point hike in September if inflation has not started to fall back by then. Markets are currently 85% confident that there will be a third 50-basis-point increase in September.

Focus turns to RBA and ECB

Ahead of the Fed’s decision next week, we have the likes of the Reserve Bank of Australia (Tuesday) and European Central Bank (Thursday) to look forward to this week.
If the above central banks and inflation data this week all point towards more aggressive policy tightening then this, along with ongoing concern over the war in Ukraine, will add to investor worries and once again pressure global stocks.

Ahead of the above macro events, the FTSE has reached a key area of resistance again between 7645 to 7685ish: 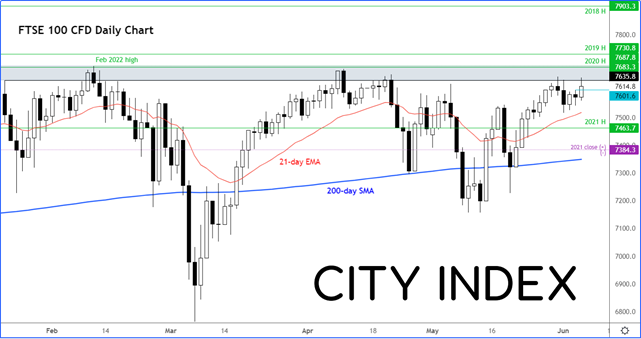 It is possible we could see a reversal here, but bearish speculators must wait to see that before pouncing as the FTSE has been one of the strongest among the major global indices this year.

Search for the market you want to trade in our award-winning platform
Choose your position and size, and your stop and limit levels
Place the trade
Related tags: Stocks Trade Ideas Indices FTSE 100