European stock markets have extended their losses, with US futures also pointing to another sharp drop at the open. “Risk-off” remains dominant theme, with safe-haven US dollar also rising. The publication of stronger-than-expected European PMIs was unable to lift the mode, although they all remained below the expansion level of 50.0. Eurozone CPI was revised a touch higher to 10.1%, underscoring the ECB’s desire to keep its restrictive policy in place for longer.

So, what is really driving the markets?

In a nutshell, it is all about fears over a sharper economic slowdown in 2023 than previously expected. While macro data have been weak of late, there was still hope that the downturn might be short-lived and that a recession might be avoided in some regions altogether, amid signs of inflation peaking in some regions like the US.

However, the market has questioned that view after central banks from two of the world’s largest trading blocs signalled that their restrictive monetary policies are going to remain in place for longer than expected.

There were hopes that with inflation showing signs of peaking, the Fed and ECB would end their rate increases soon.

While the Fed was a little more hawkish in that the FOMC projected a terminal interest rate of around 5%, slightly more than the market had anticipated, the real surprise was the ECB, which caught many people by surprise.

Though the EUR/USD initially rallied, its gains soon evaporated as risk sentiment quickly turned sour and stocks fell. Traders became concerned about the ECB’s desire to raise interest rates at a 50 basis-point pace “for a period of time,” according to President Christine Lagarde.

Other high-beta currencies also sold off, and this helped to support the safe-haven US dollar.

But the impact of the hawkish ECB was felt even greater in the stock market, where the major indices suffered one of their biggest declines in weeks.

At the time of writing, there was still no end in sight in the stock market sell-off as we headed to the final day of the week, and final weeks of the year.

There are a few key support levels approaching on the major indices such as the below highlighted region on the German DAX index, but let’s see if the markets will bounce there and whether any bounce that we might see will hold. 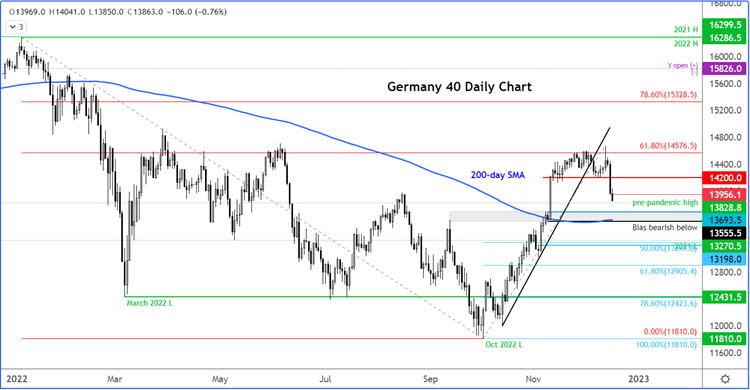