It has been a great week for most risk assets. European stocks continued to gain ground in the first half of Thursday’s session, after US markets closed near their session highs on Wednesday after minutes from the Fed’s latest policy meeting showed a “substantial majority” of officials think the pace of interest rate rises should slow in the months ahead. The dollar has also remained on the backfoot for the same reason, lifting the major currency pairs and gold. But with China struggling to curb record Covid cases, this has the potential to halt the risk rally.

For now, as indicated, sentiment remains supported by hopes that the Fed will slow down its interest rate hikes and potentially pause in the next few months. Signs of slowing inflation and weakening data have both helped to support this view. Investors have chosen not to worry to much about demand falling with major economies on the verge of being tipped into a recession. This is something that could come back to haunt investors, as the focus moves away from the peak inflation narrative, towards growth – or the lack thereof.

China is a major source of worry. Here, the highest number of daily Covid cases have been recorded since the pandemic began. That’s despite stringent measures designed to curtail the virus. The virus outbreak is widespread, including in several major cities such as the capital Beijing and the trade hub Guangzhou. Already, China has re-imposed a range of measures under its zero-COVID policy. These include lockdowns, mass testing and quarantines for anyone suspected of having come into contact with the virus. Clearly, this is not good news for the economy. We are seeing evidence of that with oil prices, yuan and Chinese stock markets all falling.

So far, investors in this side of the world have ignored the situation in China. But when China sneezes, the rest of the world tends to catch a cold. Economic activity outside of China is already weak. Data from the Eurozone and more recently US point to a slowdown, although this morning saw the closely watched German Ifo Business Climate index come in ahead of expectations, as too did the UK’s CBI Industrial Oder Expectations. This week we also had weak manufacturing and services PMI readings from the UK, France, Germany and Eurozone, although all still beat expectations. It is worth pointing out, though, that the rebound for much of recent data surprises, including these, come from a very low base and do not necessarily mean growth will return quicker.

Against this backdrop of a weakening macro-outlook, I question this big rally we have seen on the major indices. Investors are clearly not acting rationally – unless I am missing something. With US stock and bond markets being closed due to the Thanksgiving holiday, it is definitely worth keeping a close eye on any headlines coming out of China.

But for now, the uptrend for stocks remains intact.

Like many other major indices, the FTSE has been rising sharply in recent weeks, breaking resistance after resistance. It has established a steep trend line in the processes, as the retracements have been shallow. The UK benchmark index has also broken back above the 200-day average. At the time of writing, it was testing the high from last year around 7463, where it has previously struggled this year on a few occasions. Whether or not the FTSE will be met with strong resistance around this area remains to be seen. The bulls will remain happy for as long as the 200-day holds. A decisive break below the 200-day around 7320 would tip the balance back in the bears’ favour. So far, the bears have been unable to regain control. 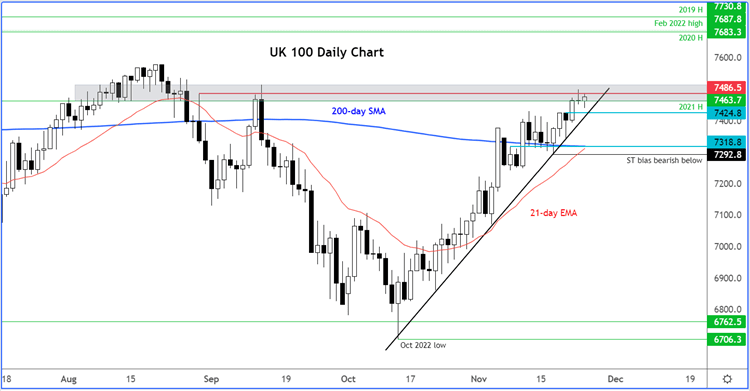