Many analysts (ourselves included – see here) viewed Friday’s disappointing 194K increase in jobs as a sign that the US labor market’s recovery may be slowing just as the Fed is likely to start removing stimulus by tapering its asset purchase program.

What are non-farm payrolls?

However, there is another interpretation of the jobs report with almost polar opposite implications for policy: Rather than being due to low demand for workers from employers, perhaps the soft jobs growth we saw last month was due to a low supply of workers that were willing to join the labor force, at least at the wages on offer?Between a growing mismatch of employee skills and employer needs, concerns about workplace safety, a lack of affordable childcare options, and government support for the unemployed, there’s a potentially convincing case that workers are no longer willing to work at certain jobs for the same pre-pandemic wages.

Digging under the surface, some of the secondary aspects of Friday’s report support the “labor shortage” thesis. For instance, the unemployment rate fell a full 0.4% to 4.8%, despite the relatively low job growth. Likewise, the Labor Force Participation Rate (LFPR) held mostly steady at 61.6%, still down nearly 2% from the pre-pandemic levels of February 2020.

Taken together, these figures suggest that fewer Americans are participating in the labor market at all. For those who are, jobs are relatively plentiful; indeed, according to the latest NFIB survey, the biggest issue for small businesses are that jobs are hard to fill, with 51% of respondents citing that concern, the highest level in decades.

So why does it matter?

As we noted above, it’s important to remain open to this interpretation of the US labor market because it augurs for almost polar opposite policies from the Federal Reserve and Congress. If potential employees are only willing to return to work for sharply higher wages, then maintaining easy policies will only exacerbate the problem and lead to stickier inflation down the road; instead, the Fed should look to start tapering immediately and potentially raise interest rates multiple times in 2022 if the labor market continues to run “hot” in this way.

How could you trade it?

The “labor shortage / sticky inflation” inflation thesis would have broad implications if it gains traction, with everything from interest rates to commodities to the greenback rising.

One specific setup that will be worth monitoring is on USD/CHF. Despite choppy price action over the last several months, the currency pair has formed a series of higher highs and higher lows within a bullish channel over the last two months. Now, rates are testing the bottom of the channel, presenting a potential low risk entry into the current uptrend: 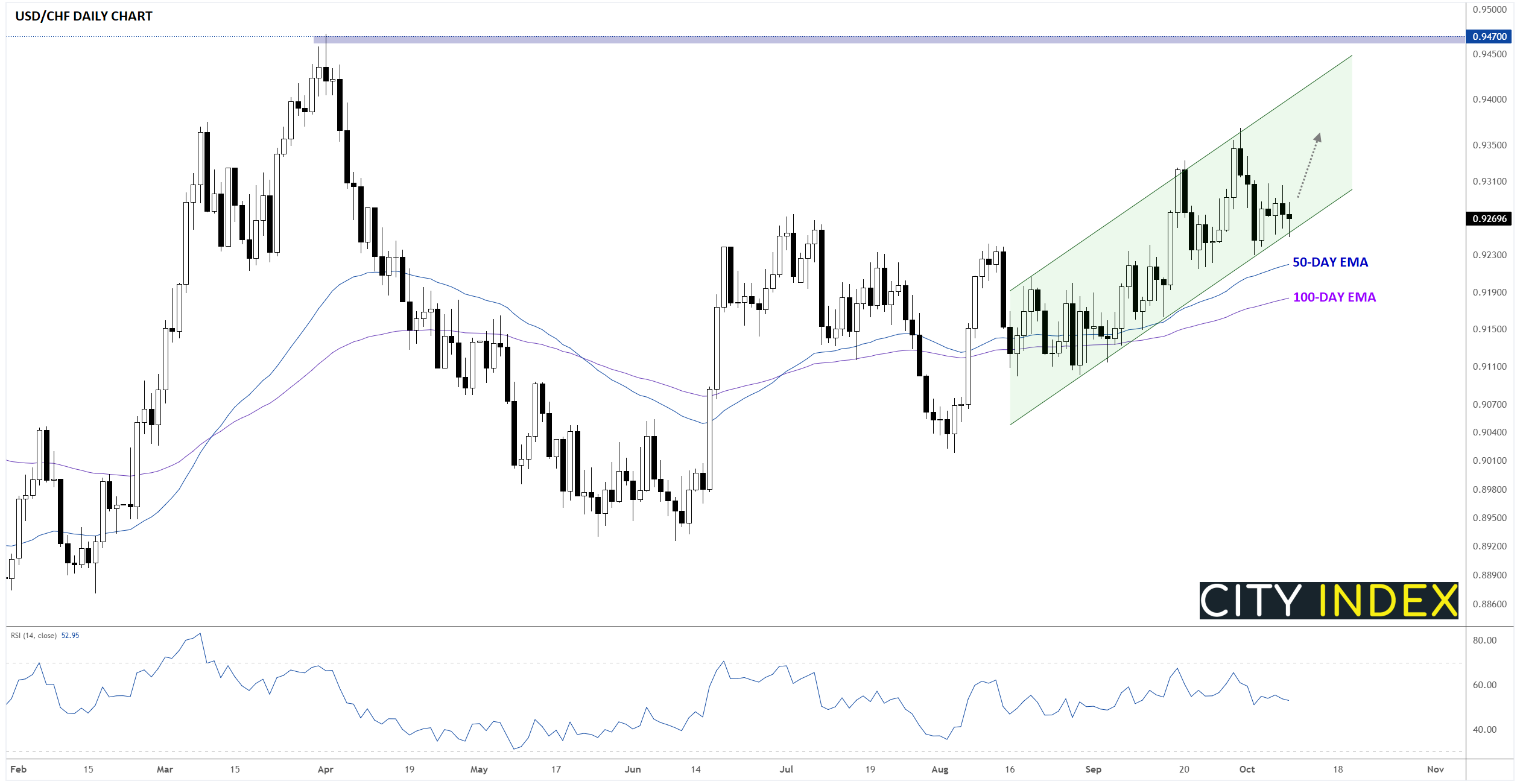 If the channel holds, USD/CHF could rally to fresh 6-month highs in the low-0.9400s before encountering any meaningful resistance. That said, a break below the current channel support level would point toward a deeper retracement to at least the rising 50- and 100-day EMAs near 0.9200 next.