Summary of the RBA’s December statement:

The RBA hiked their overnight cash rate by the 25bp, taking the OCR to 3.1% - its highest level since 2012. It is their eighth hike in as many meetings, which has seen the rate rise from a record low of 0.1% and rise by 300bp.

On one hand, a case for a pause has been building as some of the RBA’s own measures of inflation expectations have turned lower, and the monthly inflation print suggests CPI may have peaked at 7.4% y/y. Yet the statement doesn’t suggest we’re any closer to one – barring the fact that they do not meet again until February. And with the RBA expecting inflation to continue higher and household spending remaining strong as ever, then the RBA may well hike by another 25bp in February and March before reassessing.

Australian household spending rose 20.7% y/y in October, which includes a 34.2% y/y rise for services and 9.3% rise for goods. Transport and hotels, cafes and restaurants increased by around 40% with clothing and footwear rising over 32%. The RBA are keeping a close eye on household spending as it remains a key uncertainty for the central bank. But with strong numbers like this, it seems possible that the Australian economy can achieve a soft landing and allow the RBA to continue hiking in 25bp increments until people stop buying things or something breaks.

The AUD/NZD cross is now within its third month lower after we correctly anticipated a trend reversal above 1.1400. With RBNZ still expected to have a higher terminal rate than the RBA, its possible we could still see this pair move lower. Yet as today’s statement was not as dovish as I’d originally hoped (with no real mention of a pause), AUD/NZD looks oversold over the near-term and vulnerable to a countertrend move. 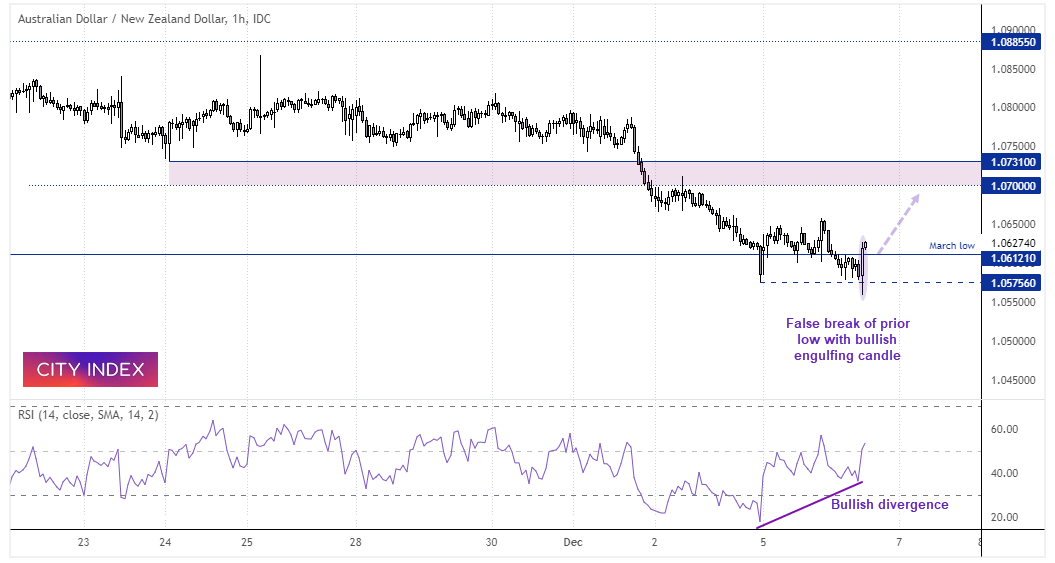 The 1-hour chart shows a false break of its previous swing low, a bullish engulfing candle has formed with a bullish divergence on the RSI (14). The bias is now for prices to retrace higher towards 1.0700, at which point we can reassess its potential to print a swing high or form a deeper retracement.