European stocks struggled once again with the Spanish Ibex (-1.5%) leading the declines, followed by the UK’s FTSE 100 (-0.70%). While the German DAX index was still clinging onto a small gain, the recent trend has been bearish and more losses could follow, as concerns about the health of the global economy continues to intensify.

More on the macro factors later, but first let’s quickly take a look at the chart of the DAX and discuss why it is poised to drop even lower: 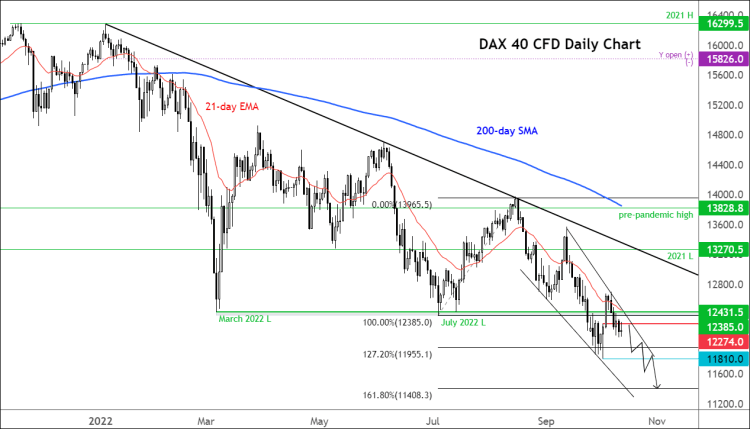 The German index looks like it has accepted to hold below the March (12431) and July (12385) lows, after last week’s recovery lost steam around the 21-day exponential moving average. With the index continuing to make lower lows and lower highs, there is no reason to be positive as things stand. Thus, we may see the bulls who established long positions last week to abandon those trades, leading to fresh declines towards the levels shown on the chart, with the first objective being the liquidity below last week’s low at 11810.

Eurozone likely in a recession

Not only were investors presented with even more disappointing data, they also saw oil prices rise further on the back of OPEC’s decision to cut output aggressively. Oil prices have come back down a little at the start of this week, but this is not nearly enough to alleviate pressure on households and businesses.

Reflecting these macro fears, on Monday we saw the closely followed Sentix Investor Confidence index plunge to -38.3 from -31.8, confounding expectations of -35.0, as it fell to levels last seen at the height of the pandemic in March 2020.

All the above figures are consistent with other signs that point to weakness in demand, and underline expectations of a looming recession in the coming quarters. The energy price shock created by the Russian invasion of Ukraine continues to be the main driver behind the economic slump in the Euro area.

Concerns about the health of the Chinese economy, the world’s second largest, is also growing. You might have missed a really weak Caixin Services PMI number that was released over the weekend. It came in at 49.3, more than 5 points lower than expected (54.5) and last month’s print of 55.0. This was also reflected in a sharp cut back by Chinese holidaymakers on travel and spending during the National Day breaks last week.

It is clear that China is struggling, which is not good for European and German exports. The economy needs fresh measures to stimulate domestic spending. However, the government’s strict Covid curbs are still there despite the rest of the world moving on and learning to live with the virus.

Chinese growth estimate for the third quarter will be released next Tuesday along with the latest data on retail sales and industrial production. Together, these macro pointers will provide us a snapshot of the health of the world’s second largest economy, which expanded by just 0.4% in Q2 compared to the same period in 2021. Judging by recent data, expect more disappointment.