NZD explained: A guide to NZD

Looking for something in particular? Jump ahead with these links.

The New Zealand dollar is the national currency and legal tender of New Zealand and associated jurisdictions such as the Cook Islands and Tokelau, as well as the British territory of the Pitcairn Islands. It was introduced in 1967 to replace the New Zealand Pound and today frequently sits among the ten most-traded currencies in the forex market.

Not ready for real money? Practise with a demo account.

The economy of New Zealand

New Zealand currently has a GDP of more than $212 billion, with a GDP per capita of some $42,000 (USD), according to 2020 World Bank statistics. This puts the nation around 52nd in terms of the largest global companies by nominal GDP. It has a developed free-market economy with key industries including aluminium production, food processing (particularly dairy) and metal fabrication.

The Reserve Bank of New Zealand is the country’s central bank, which is responsible for overseeing monetary policy and maintaining financial stability.

The economic history of New Zealand documents a journey from Polynesian tribes living off local resources, to the 19th-century arrival of European settlers, who began trading with the native people and eventually established their own communities.

Banking institutions emerged following the European arrival, and the country gradually saw the development of towns, accelerated by the emerging trade of natural resources and minerals including gold, as well as agricultural products such as wool. As gold reserves depleted, the country ramped up its export markets, with pastoral products a key source of trade.

By the 21st century, New Zealand had diversified into tourism, which accounts for around 5.5% of the country’s GDP today, according to figures from Statista. New Zealand also moved into a trade surplus for 2020 for the first time since 2011. 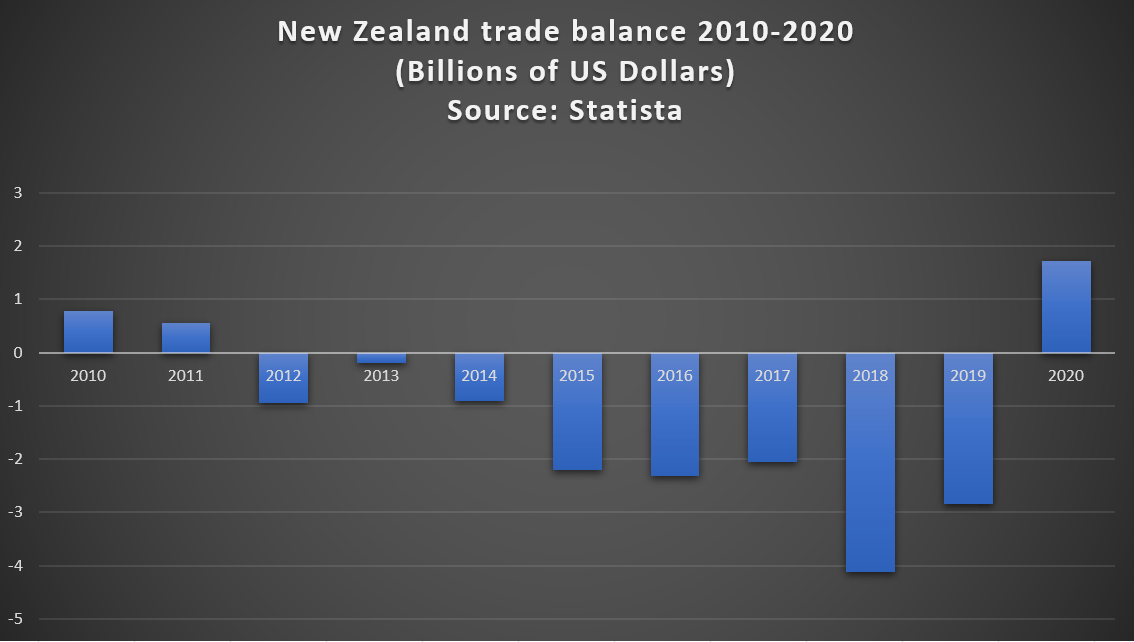 What moves the price of NZD?

There are a variety of factors that influence the price of NZD against other currencies. These include monetary policy decisions from the Reserve Bank of New Zealand, macroeconomic releases, and political events, but also factors such as dairy prices, tourism numbers and balance of payments (export and import values).

Traders should be aware of New Zealand Reserve Bank meeting dates and the release dates of key reports to help them keep on top of developments. Check out our economic calendar and don’t miss the latest announcements that can move markets.

It’s important to note that while NZD may be strengthening or weakening, you still have to consider how the other currency in the pair is performing before assessing the reasons for a pair’s moves.

The New Zealand Reserve Bank controls monetary policy and will raise interest rates to control inflation. For example, in October 2021, the Reserve Bank raised interest rates for the first time in seven years in a bid to control inflation caused by the rising cost of construction materials, agricultural products, transport and fuel. Higher rates tend to stimulate foreign investment, meaning the demand for that particular currency is greater. In turn, this means NZD may strengthen against a basket of other currencies.

Conversely, interest rates can be lowered in an attempt to stimulate economic growth and may cause investors to seek currencies with a better return, pushing the NZD price down.

News reports to consider when trading NZD, as with a range of other currencies, include sentiment, which shows whether traders are net long or short, inflation data, consumer confidence, and GDP itself, the definitive measure of economic activity. News of milk and dairy price fluctuations, as mentioned, can be consequential for NZD in particular, with tourism numbers also playing a significant role.

Broadly, a rising GDP often correlates to a strengthening currency, and a falling GDP a weakening currency. Other measures of how the economy is doing can be found in retail sales, and services and manufacturing PMIs.

Political and socioeconomic influences can both hit all currency prices hard. For example, when coronavirus hit global economies in late February 2020, NZD plunged against the US dollar as USD surged to new heights when the greenback became the safe haven of choice amid the enduring economic instability.

A brief history of the New Zealand dollar

As the pair encompasses the New Zealand and US economies, traders will, as always, need to consider fundamental factors surrounding central bank decisions when trading this currency. In this case, traders should follow key policy decisions from the Federal Reserve and the New Zealand Reserve Bank for information that might impact the pair.

Also, since New Zealand is the world’s largest exporter of milk powder, the price of milk is important for NZD traders to pay attention to, as well as the prices of wider agricultural products. A rise in such prices may be a proxy for New Zealand’s improving economic health and thus a precedent for NZD gaining traction against a range of currencies, including USD.

Due to its high trading volume, NZD/USD is generally recognised as a liquid pair, meaning the risk of slippage is minimised when trading this market.

This minor pair, sometimes known as the ‘Euro Kiwi’ is outside of the ten most-traded pairs in the forex market, but remains a liquid pair. As well as monetary policy decisions from the New Zealand Reserve Bank, traders should be aware of European Central Bank policy that can impact the euro’s rate and affect euro pairs including this one.

Known as the ‘Kiwi’, this pair’s movement is susceptible to policy decisions from the Bank of England, as well as the New Zealand Reserve Bank, in addition to the usual geopolitical and other fundamental factors that affect each of the UK and New Zealand economies. The pair is also liable to periods of volatility, meaning effective risk management is particularly important when trading such pairs.

The New Zealand dollar is available to trade 24 hours a day, five days a week – from 5pm (EST) on Sunday evening to 4pm Friday night.

The best time of day to trade NZD will depend on which pairing you decide to focus on. As a rule, each pair will see the most movement when its sessions overlap. For example, the NZD/USD pair would be more highly traded when both the New York and Sydney forex sessions overlap.

You can trade NZD against other major currencies such as the Euro, British Pound and US dollar, as well as a range of other pairs, via CFDs. Take your position on whether forex prices will rise or fall in the future, without having to buy the underlying asset.

Learn how to trade forex with us or open an account to get started.

Learn how to trade forex with us or open an account to get started.

View more
Currency Pair of the Week: GBP/USD
Stocks: No end in sight for bear trend
What is the short interest ratio?
Burberry FY preview: Where next for the Burberry share price?
US open: Stocks point to a mixed start, growth fears persist
Reddit stocks: what meme stocks are trending?

What is the short interest ratio?
By:
Ryan Thaxton