Nasdaq reeling after big reversal ahead of US tech earnings

We have seen some big moves across the financial markets in the aftermath of hawkish commentary from the Fed with traders dumping equities, precious metals and commodity currencies. Jerome Powell has more or less now confirmed that the Fed will hike by 50-bps at their next meeting. But there’s even talk of 75 basis point hikes in the upcoming meetings. This is what is spooking equity market bulls, especially on US technology sector where the dividend yields are low and becoming increasingly less attractive as government bond yields continue to rise. The Fed’s hawkishness has also more than outweighed any positive vibes that came our way earlier in the week from Europe, where the Ukraine conflict is no longer having the same impact on asset prices as it did when the invasion first started while there’s also been some optimism ahead of the French election on Sunday, with far-right Le Pen falling behind in the polls.

So, as we look ahead to the US session and weekend, sentiment is quite downbeat following Thursday’s reversal in risk appetite. Powell’s hawkish remarks have been echoed by several other FOMC members such as Daly and Bullard, with the latter saying the Fed is behind the curve. We won’t be hearing much from Fed speakers in the next couple of weeks as we enter the blackout period ahead of the central banks May 4 meeting. But the damage has already been done and the massage has been loud and clear: US Federal Funds Rate will most likely rise by 50 basis points at that meeting.

Investors’ focus will remain on inflation and company earnings. Should we see further signs that price pressures are not weakening, this will likely keep technology stocks under pressure, especially as expectations are downbeat ahead of the Big Tech earnings. Alphabet, Microsoft, Meta, Apple and Amazon are all due to report their quarterly results in the week ahead. Inflation and supple chain headwinds are among the major themes likely to dominate the agenda this earnings season. So, be prepared for some disappointment.

If you want to learn more about what to expect from this earnings season, read my stock-focused-analyst colleague Joshua Warner’s preview HERE. Note that some of these tech names are among the most shorted stocks, with Amazon topping the list this week, according to City Index’s UK client data.

Meanwhile, the major US induces are continuing to look bearish, especially the Nasdaq 100 and Russell 2000. Rising rate hike expectations and continued bearish-looking price action on the major indices suggests we may see more selling pressure in the weeks ahead.

Thursday’s sell-off has pushed the Nasdaq below last week’s low, which means the index is now down for the third consecutive week, reversing a big chunk of the rally that started in mid-March: 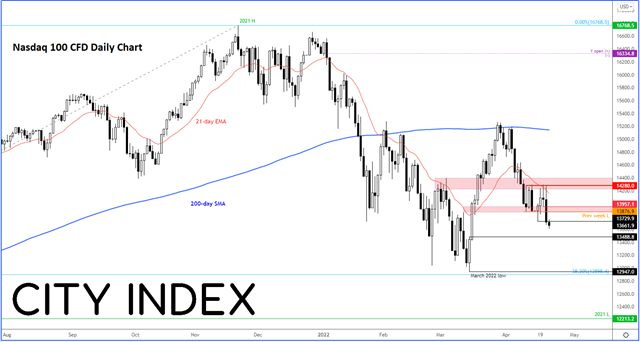