It has ‘squeeze’ written all over it…

In the aftermath of the hotter US CPI report, we saw risk assets tumble as the dollar and bonds jumped. Much – or in some cases, all – of those moves have since been undone due to profit-taking, while banks and energy stocks rose thanks to even higher yields and rebounding crude oil prices. In FX, the dollar gave back its entire CPI-related gains against the likes of the pound and euro but held firmer against the likes of the yen, yuan and franc, albeit well off its earlier highs.

Despite the rebound in the second half of the day, it is difficult to make a strong bear case for the greenback or a strong bull case for stocks.

Indeed, following the stronger CPI report, the case has been sealed for a fourth 75-basis point hike in September, although there are now talks that the Fed could even hike by 100 bps. This should keep the US dollar supported on the dips against currencies where the central bank is either hiking less aggressively or is not. Stocks and gold might continue to struggle until something changes fundamentally.

It is just that it has been a one-sided trade for so long, and a squeeze was inevitable.

So, let’s see how much of a squeeze we will get now. But I reckon it is just that – a short squeeze in the case of the indices.

The Nasdaq has now entered a potential resistance zone here, but let’s see if the sellers will step in or the bulls will continue their charge. 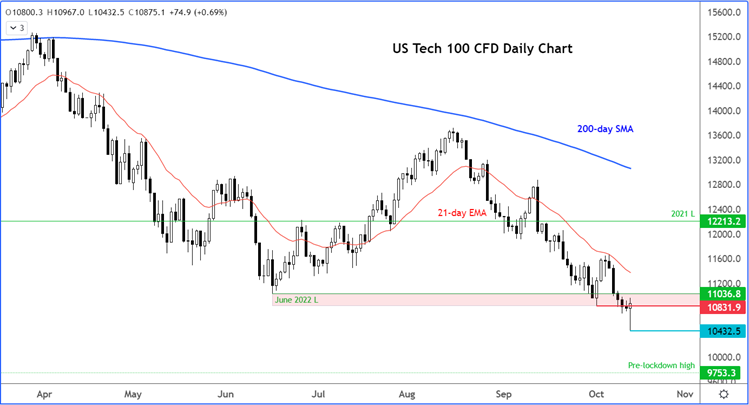