The big rally last week and, in particular, on Friday in stock indices, metals and oil were mostly attributed to optimism about China dropping its zero Covid policy. At the weekend, however, Chinese officials affirmed “unswervingly” the country’s strict stance on Covid. This should have been negative for risk assets. And although that’s how it proved first thing at the Asian open, as index futures gapped lower along with copper and oil, indices later reversed their losses and, in some cases, rallied to fresh highs for the month – the likes of the German DAX, for example.

Strong dollar and weak foreign demand will hurt US exports

More on the DAX later, but the bullish reversal in the markets suggests investors are perhaps happy to see signs that the US economy is holding its own rather well in terms of employment, where on Friday the monthly non-farm payrolls report showed strong hiring and wage increases. There’s hope that the US could do the heavy lifting. However, I can’t see how the world’s largest economy will weather a global slowdown. With the dollar being so strong, this should hurt US exports and weigh on the economy.

The problem in the US and indeed other parts of the world is high inflation. This is going to keep the Fed’s policy in contractionary stance for a while yet. The latest US inflation reading is due on Thursday. Previously, we saw the core consumer price index rise more than forecast to a 40-year high in September. Even if price pressures begin to moderate, CPI is simply too high for the Fed to pivot to a dovish stance just yet. This should provide a ceiling to risk assets, and a floor to the US dollar.

Across this side of the Atlantic, we saw the release of even more disappointing German data on Friday with factory orders slumping by 4% month-over-month compared to a fall of just 0.5% expected. That said, the German and Eurozone final PMIs were all revised higher, albeit both remained well below 50.0. We also had some improvement in German industrial production (+0.6% m/m vs. +0.2% expected) as fresh data revealed this morning.

But that’s like a drop in the ocean of mostly bad data from the Eurozone. Up next, Eurozone retail sales are due on Tuesday. If we don’t see much improvement in sales, expect to see retailers come under renewed pressure.

As investors weigh the fundamentals, the battle between those looking at the longer-term bearish trend and those at shorter-term bullish trend, continues. Soon, the markets will provide us a clear directional bias.

At the time of writing, the DAX was testing its 200-day average around 13610, so it was still possible for another U-turn on the session. 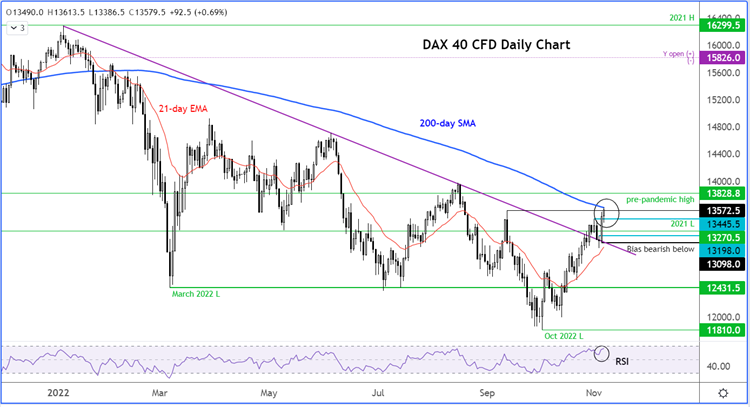 The 200-day average is an important indicator of the trend, as it smooths out short-term volatility. It is an objective way of telling you what the trend direction is. Some see the 200-day as the mean price, where the market tends to gravitate towards before resuming in the prevailing direction of the trend.

If you focus on the slope of the 200-day average, it was previously positive, before flattening around the start of the year, and then trending lower. This is echoed by nearly all other major indices.

With the slope of the moving average being negative, the long-term trend is objectively bearish. The short-term trend has been bullish, however, with the index rising noticeably from its October lows in recent weeks.

But with the DAX now testing the 200-day, it is possible we might see a reversal in the short-term trend and go back in tune with the longer-term bearish trend.

Conservative traders should wait for the reversal to take place with a confirmed signal before potentially looking at shorting opportunities.

For me, one particular bearish signal would be if we go back below Friday’s large range in the coming days. If that happens, it would suggest that the breakout above the trend line was a false move. We will then likely see follow-up technical selling in response.