Japan finds itself in a unique situation compared to many other developed countries around the world. Inflation is increasing, but the Bank of Japan still maintains that it will keep Monetary Policy accommodative.  BoJ Governor Kuroda insists that the inflation is transitory and that it will decrease in the months ahead.  However, recall that at the December BoJ meeting, the board increased the cap on the 10-year JGB from 0.25% to 0.50%.  This would lead one to assume Quantitative Tightening.  However, Kuroda denied any type of QT and said that easing will continue.  Traders aren’t taking any chances.  The Nikkei 225 Index has moved lower 4 of the last 5 trading days, as they anticipate some type of QT when the BoJ holds its Interest Rate Decision meeting on Wednesday.

The Nikkei 225 Index has been relatively contained over the last 2 years.  The widely followed Japanese Index rose from a Covid low of 18034 in March 2020 to an all-time high of 30724 in February 2021.  Since then, price has been relatively contained, trading in a range between roughly 25524 and 30724, with a brief break above to a new high of 30801.50. However, price has been trading in the lower half of the range over the last year and has been making lower highs on the weekly timeframe.  The Nikkei 225 Index is currently testing support at the lower end of the range. 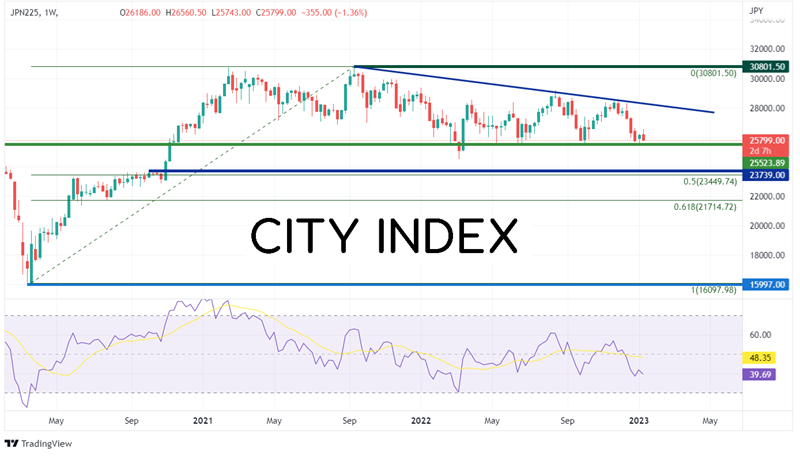 Trade the Nikkei 225 now: Login or Open a new account!

On a daily timeframe, the Nikkei 225 appears to be moving lower as traders contemplate the Bank of Japan’s decision next week.  If the BoJ is less dovish than expected, the index may break support and continue lower.  First support is at the range lows of 25524.  Below there, price can fall to the lows of the false breakdown of the channel in March 2022 at 24497, then horizontal support from October 2020 at 23739.  If price does break support, the downside target is the height of the channel added to the breakdown point.  In this case the target is near 20100.  However, if the BoJ maintains its dovish, accommodative stance, price may hold support and bounce.  First resistance is at the highs of January 12th near 26556, then the lows of December 8th, 2022 at 27406. Above there, the Nikkei 225 can move to a confluence of resistance at the highs from November 25th, 2022 and a downward sloping trendline off the all-time highs, near 28500.

With inflation rising to near 4% in Japan, the Bank of Japan is feeling the pressure to do more to reduce the pace increase.  However, the BoJ has remained steadfast in its attempt to keep Monetary Policy accommodative.  Will the BoJ act when it meets on Wednesday?  Traders aren’t taking any chances and are selling the Nikkei 225 ahead of any surprises.  However, the key will be if the index can take out the bottom trendline of the long-term channel near 25524.

Not for the first time, the BOJ spite the hype (presser pending…)
By:
Matt Simpson