How will the Russia-Ukraine conflict impact inflation?

Inflation emerged as the single biggest hurdle for the global economy as it began to recover from the pandemic last year, but central banks were confident that that easing supply chain bottlenecks and higher interest rates this year would see inflation peak in 2022 before starting to subside.

However, the crisis in Ukraine will undoubtedly fuel further inflation and cast severe doubt over when the surge in the cost of living will end. Not only will it encourage prices to climb higher, the conflict is also set to severely stifle the global economic recovery from the pandemic.  It also causes a headache for central banks that need to counter higher inflation with higher interest rates, but also don’t want to push up the cost of debt and mortgages at a time when consumers’ purse-strings are already being tightened.

Let’s take a look at how the Russia-Ukraine conflict is set to drive inflation in some key industries.

Russia has closed its airspace to airlines from at least 36 countries, including all 27 members of the European Union, which itself has also banned Russia aircraft from its own airspace. Unsurprisingly, Ukraine’s airspace is also closed to all civilian aircraft due to the conflict.

This is likely to cause major headaches for airlines. The size of the no-go fly zone for airlines is vast considering the geographical scale of Russia and this will require the industry to reroute flights and spend significantly more on fuel at a time when oil prices are surging higher thanks to the conflict. This is set to feed through to higher prices for travellers.

Most flights heading east out of Europe fly over Russia, but could now have to navigate south of the Black Sea in order to get to their destination or even take a longer route by heading westward out of the continent that uses Greenland, Canada and Alaska as a route toward Asian countries like Japan.  Put simply, the situation could be a severe headwind for an industry where success is derived from being as efficient as possible.

The STOXX Europe Total Market Airlines index that tracks the performance of leading European players including Ryanair, IAG, Lufthansa, easyJet, Wizz Air, Air France and others has fallen over 8% during the first week of the conflict.

It isn’t just the movement of people that will be impacted, but also of goods. Cargo planes and shipping vessels will also have to navigate the new lines drawn across the map. This will not only add to the rising cost of shipping but also exacerbate the supply chain disruption hitting industries around the world by delaying deliveries.

Rising food prices have been one of the primary drivers of inflation across the world, which in turn has been caused by a surge in the cost of the raw materials needed to produce and package the food and drink we all rely on, combined with rising transportation costs and higher wages for staff amid a tight labour market. And the buyers of this food and drink, such as supermarkets, have little choice but to pass these higher costs onto the customers that consume it.

Russia and Ukraine are two of the world’s largest exporters of wheat, corn and other agricultural products like rapeseed, barley and sunflower seeds – all of which is sent out across Asia, Europe and Northern Africa. Russia is also a huge exporter of fertilisers used to yield better harvests at farms across the world. 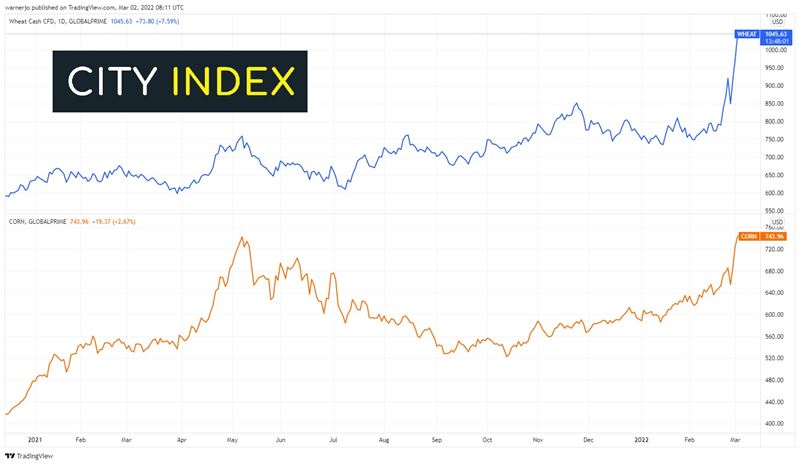 All of this will undoubtedly fuel further inflation in food prices so long as the conflict continues and economic sanctions remain in place.

The price of energy was also on the rise before the conflict started as a result of rising demand as the global economy restarts combined with tight supplies as the hangover of the pandemic continues to cause problems.

That has now been exacerbated by the threat of further supply disruptions considering Russia is the third largest oil producer in the world. Brent has surpassed $110 per barrel for the first time since 2014 today, despite OPEC+ signalling it will raise output by 400,000 barrels per day in April and signs that the IEA and US allies are also set to release significant amounts from their reserves.

For now, it is a battle between major producers that want to keep prices high to earn as much money as possible and major consumers that want more action be taken to bring prices down as governments face growing pressure over rising energy and fuel prices. 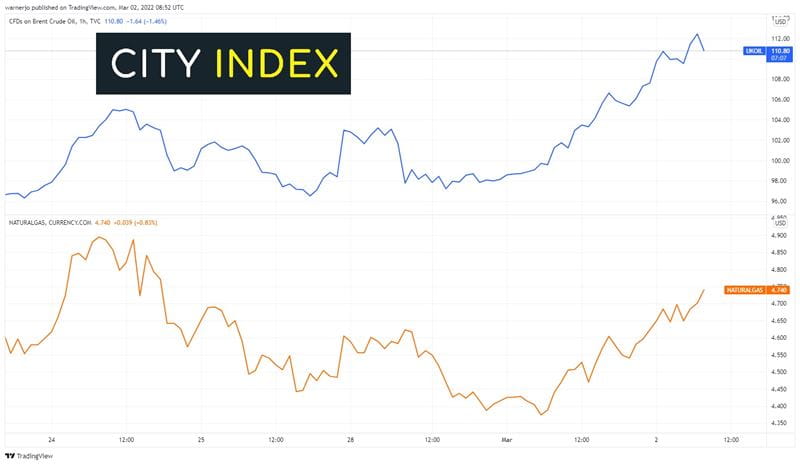 Russia’s strongest playing card that has long be used to fuel its political ambitions is the reliance many countries have on its gas. For example, the European Union, which has joined its allies by introducing economic sanctions on Russia, buys around 40% of its natural gas from the country, which for now has decided to keep the gas flowing. That has so far tempered the rise in gas prices compared to oil, but this is likely to become more volatile if the situation continues to escalate.

We have already seen countries make some major decisions based on the invasion. Germany has put the Nord Stream 2 pipeline that was due to double the amount of gas being pumped into the country from Russia on hold and politicians across the bloc are calling for action to wean the continent off its reliance on Russia for its energy.

Read more: What is natural gas and how do you trade it?

Russia is also a sizeable producer of other key commodities, boasting the largest output of palladium and nickel and also among the top makers of the likes gold, silver, steel and timber. As a result of Russia’s isolation, prices have pushed higher since the start of the conflict over concerns supplies will be significantly impacted. 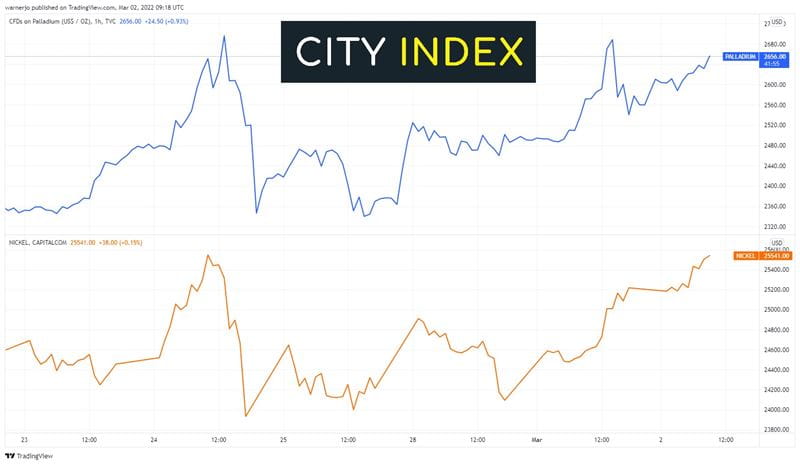 In turn, higher metal prices will feed through to those that buy them in order to create products, such as technology or cars, which may have to pass these cost increases onto consumers. For example, palladium is a key metal in catalytic converters of cars while nickel is used in everything from mobile phones to medical equipment.

One area that looks vulnerable is the semiconductor market, which has already been struggling with a global chip shortage for the past two years. Ukraine is thought to account for up to half of the world’s supplies of neon gas, which is used to power lasers that can etch intricate designs on the chips used to power tech. There were hopes that the chip shortage would start to ease in 2022 as new capacity comes online, but the conflict threatens to throttle supply of key ingredients. That could pose severe problems for tech makers and the automotive industry.

How to trade during the Russia-Ukraine crisis

You can trade the volatility injected by the Russia-Ukraine crisis through a variety of ways, from the commodities on the move as a result of the conflict to the stocks that could feel the pinch as inflation continues to rise. You can trade with City Index in just four easy steps: