How to trade the hammer and inverted hammer candlestick pattern

Hammer and inverted hammer candlestick patterns are a key part of technical trading, forming the building blocks of many strategies. Learn all about how to trade the different types of hammer here.


What is a hammer candlestick pattern?

A hammer pattern is a candlestick that has a long lower wick and a short body. With little or no upper wick, a hammer candlestick should resemble a hammer. This bullish reversal pattern appears at the end of downtrends, signalling that a bear market may be about to bounce into an uptrend. 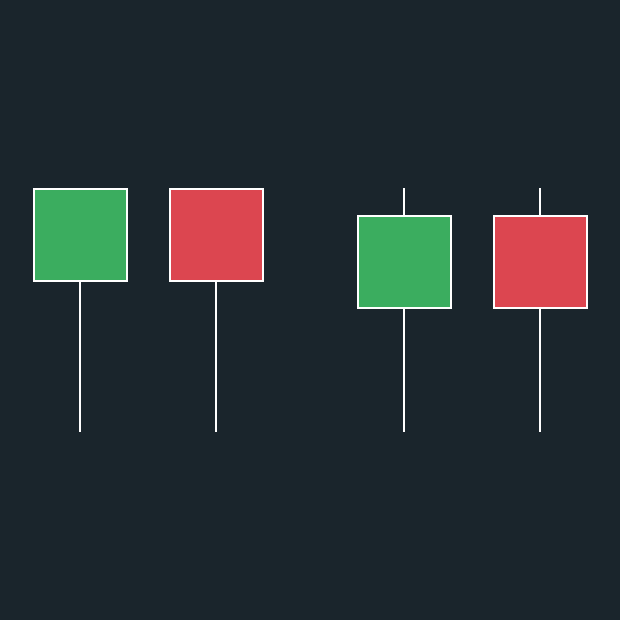 To see why it’s seen as a bullish reversal pattern, we can take a closer look at the potential price action within the session.

The long lower wick indicates that the period began with sellers still firmly in control, continuing the downtrend and pushing the market to new lows. But the short body means that buyers fought back and pushed its price back up towards the open before the session’s close.

Regardless of whether the pattern is red or green, the belief is that sentiment has now swung towards buyers, and the uptrend that began in the hammer should continue into the next session and beyond.

Spotted a hammer on a market that’s not in a downtrend? You might have discovered a hanging man instead. A hanging man is a bearish reversal pattern that can signal the end of a bull run.

Despite looking exactly like a hammer, the hanging man signals the exact opposite price action.

Learn more about how to read chart patterns.

To trade hammer patterns, you’ll look to take advantage of the new uptrend that should form shortly after the candlestick appears. 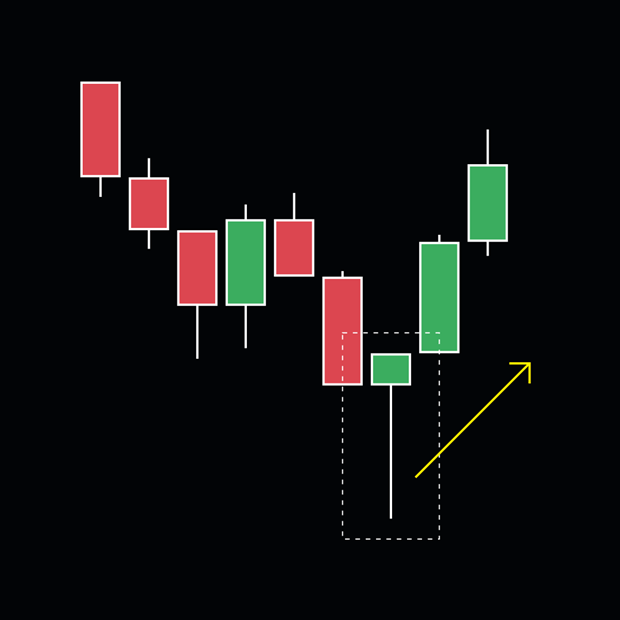 As with any candlestick pattern, you’ll want to confirm the new trend before you open your trade. You could do this by waiting a few periods to check that the upswing is underway, or by using technical indicators.

Remember, hammers are a single candlestick pattern which means false signals are relatively common – and risk management is imperative. Most traders will tend to use nearby areas of support and resistance to place their stops and take profits.

Hammers can also be used as an exit signal. If you have an open short position that’s profiting from a downtrend and you spot a hammer, it might be time to exit before an upward move eats into your profits.


What is the inverted hammer pattern?

An inverted hammer is a candlestick pattern that looks exactly like a hammer, except it is upside down. Despite being inverted, it’s still a bullish reversal pattern – indicating the end of a downtrend and the beginning of a possible new bull move.

To spot an inverted hammer, look for a candlestick with a long upper wick and little to no lower wick. Again, the body should be comparatively short.

With the inverted hammer, the session begins with buyers taking control and reversing the ongoing downtrend. But then sellers take over once more, forcing the market back down towards the open. It’s the opposite of what happens in a hammer pattern.

However, the sellers were only able to maintain equilibrium. By the end of the period, the market was back where it started, a key sign that selling momentum is waning and buyers are ready to step in.

As with the hammer, you can find an inverted hammer in an uptrend too. But here, it’s called a shooting star and signals an impending bearish reversal. You can learn more about how shooting stars work in our guide to candlestick patterns.

Inverted hammers and standard hammers both signal the same price action, so you’d usually trade them in exactly the same way – with a long position to take advantage of the uptrend, or by closing an existing short position to prevent losses.

Look for a nearby area of support to place your stop at, and a resistance level that might work as a profit target. And always confirm that a trend is underway before you fully commit to your position.

At this point, you might also want to check that the exit points you’ve identified align with your chosen risk-reward ratio.

To see how a hammer pattern works in live markets without risking any capital, you can open a City Index demo account. Demo accounts are a vital tool for traders of all experience levels, as they give you a sandbox environment to trial strategies before you put them to the test with real funds.

A City Index demo comes with £10,000 virtual funds and access to our full range of markets. Open your demo account here.

Let’s use EUR/USD for an illustration of how hammer patterns can appear on a market.

EUR/USD has been trending lower for several sessions, eventually hitting 1.1398 at the close. In the next period, that run continues, with the market dropping a further 30 points down to 1.1368. However, it then reverses and climbs up to 1.1390 before the close.

This move would form a classic hammer pattern on a chart, and technical traders would then expect eurodollar to enter a new uptrend.