On October 4th, the Reserve Bank of Australia hiked rates by 25bps to bring the cash rate to 2.60%.  At the previous four meetings, the RBA hiked rates by 50bps each.  Markets were expecting the same for the October meeting. However, the central bank failed to meet expectations.  Many assumed at the time that this could be the RBA “pivot”, or the point where the central bank would only hike by small amounts or even stop hiking rates all together.  So, when the Minutes of the October meeting were released earlier today, many assumed that they would have a less hawkish, or even dovish, slant to them.

Although the board said that a slowdown in the pace of hikes was warranted as interest rate hikes lag the economy, it also noted that further rate hikes are likely during the outlook period as the monthly CPI continues to show a broad-based pickup in inflation, rents and utilities.  The board noted that 2022 CPI is expected to be around 7.75% during the meeting.  RBA Deputy Governor Bullock spoke today and said that she expects to continue to increase interest rates further, with the pace to be determined by incoming data.  In addition, she added an important comment which also may be a reason that a 25bps hike was warranted: “ as the board meets more frequently than most peers, it can achieve a similar tightening with smaller individual rate increase.”  The RBA meets again on November 1st.  Its last meeting was October 4th.  This contrasts with the US FOMC who meet less frequently.  Its next meeting is on November 2nd and its last meeting was September 21st.

AUD/USD has been moving lower since February 2021 when the pair reached a high of 0.8007.  However, AUD/USD began to pick up momentum on the move lower after it reached a near-term high on April 5th, 2022 at 0.7649.  The pair began moving lower in an orderly channel and on September 23rd, AUD/USD broke through a long term trendline dating to August 20th, 2021 near 0.6625.  Since then, the pair has been moving in a tight, shorter-term descending channel and has reached support at the bottom trendline of the longer-term channel near 0.6170.  This is also horizontal support dating to  March 2020. 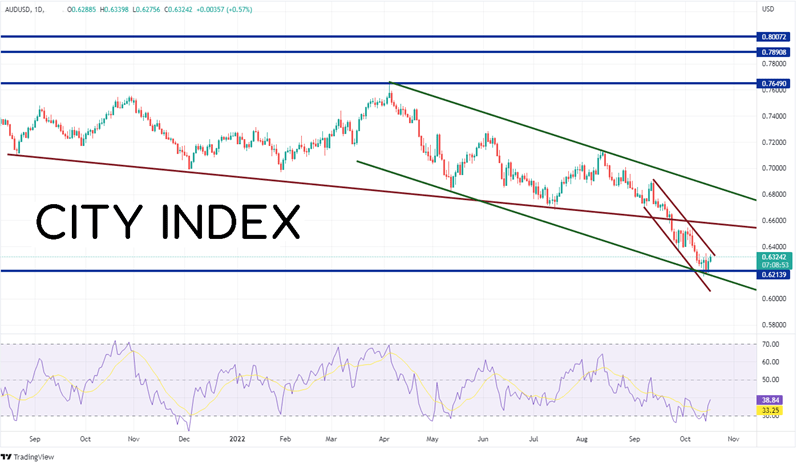 On a 240-minute timeframe, AUD/USD is nearing the top trendline of the short-term channel.  This trendline, along with horizontal resistance at 0.6365, will act as first resistance.  Above there, price can move to the 38.2% Fibonacci retracement from the highs of September 13th to the lows of October 13th, near 0.6455 and then the 50% retracement from that same timeframe and previous highs at 0.6443.  However, if the resistance holds, first support is at the October 13th lows and the bottom trendline of the long-term channel at 0.6170.  Below there, AUD/USD can fall to the trendline of the short-term channel near 0.6050 and then the lows from the week of April 2020 at 0.5991. The RBA meets more often than many of its peers, and therefore, it felt justified in only raising rates by 25bps on October 4th.  Does that mean that the RBA is pivoting?  Not necessarily.  The board meets again on November 1st, less than a month after the previous meeting.  Therefore, by meeting more frequently, the board has the flexibility to increase or slow the pace of rate hikes as needed during a shorter timeframe than its peers.