After a bright start, gold has turned lower on the week, now down for the second consecutive week. Truth be told, it was always going to be an uphill struggle for the metal. Fears over further tightening of central bank policy amid an environment of high-inflation and low-growth meant investors were never going buy gold aggressively. Lo and behold, that’s how it proved again today, as the metal has broken down with the dollar rising.

US 10-year bond yields have surpassed the 4% threshold once again. In the UK, CPI inflation rose back above double digits, to 10.1% from 9.9% last time. This helped to support UK yields, as bets over further BoE tightening rose. The pound nonetheless sold off, as worries over the economy outweighed benefits over higher yields. Gold and pound were not the only things selling off. Stocks declined in Europe, after another bruising session in China where the CSI 300 index closed down 1.6% and the yuan fell to a fresh multi-year low against the dollar.

In addition to central bank tightening, China is apparently in deep trouble amid its zero covid policy. Remember that China decided to postpone, without giving a reason, the release of its third quarter growth and industrial production figures that were due for publication today. Analysts think that economic growth there has slowed to a new three-decade low of 3.3% compared to 4.9% recorded in the same period a year ago. But the fact that China has delayed the release of the data does not look good and investors are worried that the world’s second largest economy may have performed even poorer than those expectations.

China and India are the largest purchasers of gold. If China is not doing well, this is not good news for gold in terms of physical demand. India’s declining exchange rate and high inflation is a problem seen across many other parts of the world.

While purchasing gold to protect against devaluation of fiat currency may be a reason to buy gold, this hasn’t exactly supported prices this year. It could be that because people’s incomes are so stretched, there’s not much left to invest, even in gold. Still, as prices weaken further, gold will slowly become more appealing from an investment point of view.

In the short-term, though, the path of least resistance is to the downside and as support after support breaks, this will give rise to further technical selling. A drop below September’s low at $1615 looks very likely now, with $1600 being the next target for the bears. 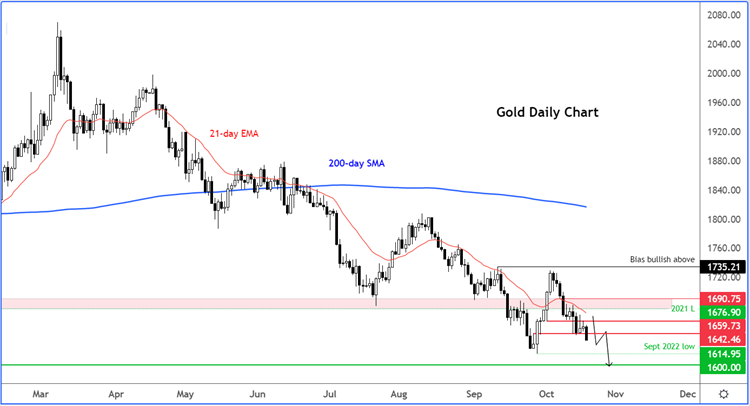