The Bank of England intervened in the Bond market on Wednesday.  According to a Reuters “source”, the intervention was a response to issues with liability-driven investments and links to pension funds.  The BOE has said that it would buy Gilts with maturities over 20 years, beginning today and lasting until October 14th.   As a result, the yield on the 30-year Gilt has moved from a high on the day of 5.092% down to a low of 3.869%.  Recall that it was just Thursday that the Bank of England announced a rate hike of 50bps to bring the overnight rate to 2.25% and that it would begin selling its holdings of Gilts at a rate of 80 billion Pounds per year.  This sale has been pushed back and will now begin on October 31st. The opening level on the 30-year Gilt on Thursday was 3.535%. However, note the volatility in 30-year Gilt yield since then, which has been more directly related to the fear of new PM Truss’s fiscal policies than fear of the BOE’s monetary policy. 30-year Gilt yields moved up 134bps since Friday’s open and has retraced almost all of that back today! 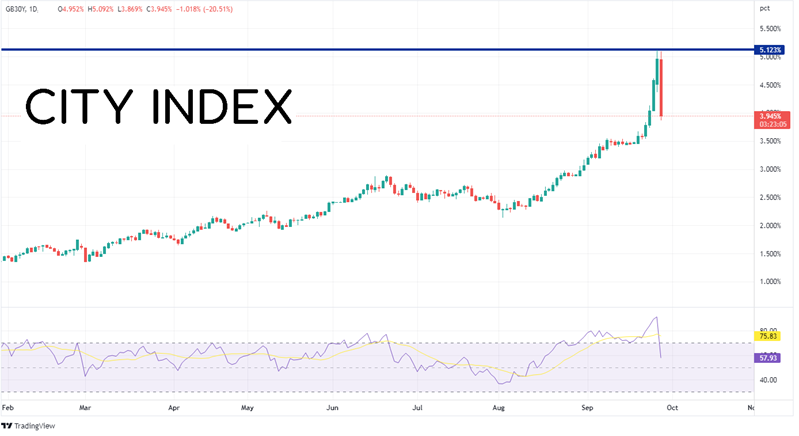 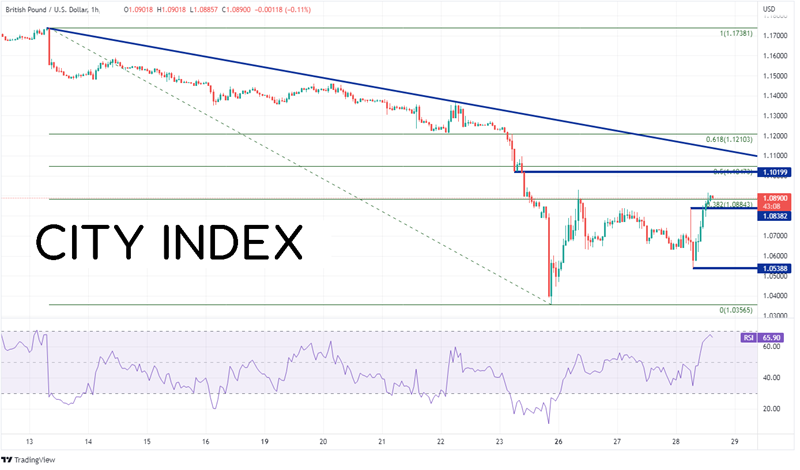 As my colleague Fawad Razaqzada points out, the intervention may not be good for the Pound in the long-term.  However, as we have seen today, the BOE may have “saved the Pound” in the short-term.  If the pair continues to move higher, the first horizontal resistance is near 1.1020.  Above there, the pair can move to the 50% Fibonacci retracement level from the above-mentioned timeframe near 1.1047, then a downward sloping trendline from the September 13th highs near 1.1135.  First support is at the spike high after the BOE announcement at 1.0838.  Below there, GBP/USD can fall to today’s low of 1.0539, then the all-time low at 1.0357.

Did the Bank of England succeed in saving the Gilt market and thus, saving the Pound?  It may have worked in the short-term as the yield on the 30-year Gilt fell over 100bps today and GBP/USD closed up over 150 pips on the day.  However, in the long-term, the intervention may not be sustainable, and GBP/USD could end up moving to parity or below!