The pound rose – although not very convincingly – in response to the government’s unprecedented fiscal U-turn today, as new Chancellor Jeremy Hunt basically reversed everything announced in the controversial mini-budget. The GBP/USD climbed to a session high of 1.1331 before midday and then it slumped some 65 pips from there, before bouncing back again. The other GBP crosses were firmer, too, along with the FTSE and government bond prices, as yields fell.

So, we have seen almost a complete U-turn on all the flagship measures Liz Truss had announced, raising serious question marks over her position as PM. The fact that we have not seen a bigger reaction in the markets is understandable. Investors are wary of the political situation, which remains tense, and a lot could still change.  For now, there is a bit of hope that Jeremy Hunt will help bring the country’s public finances back in order. But his work is undermining under-pressure PM Liz Truss, who some argue is on borrowed time. As a result, traders remain very cautious, and thus unwilling to commit in one or other direction. This should mean continued volatility for sterling. 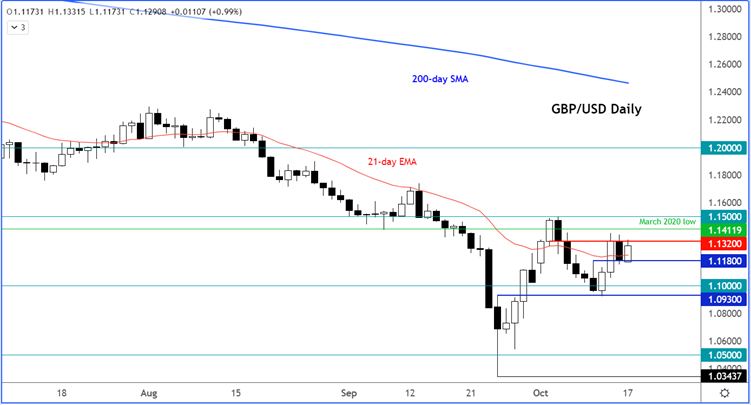 The slightly calmer tone in the markets were reflected in UK bond yields falling: 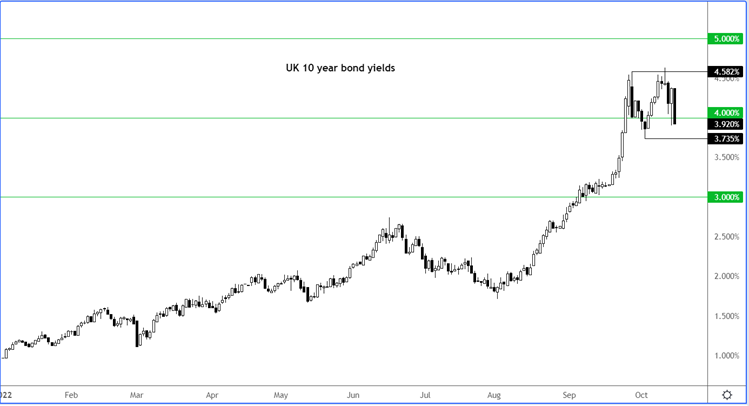 It is worth keeping a close eye on yields, as the Bank of England has ended its temporary bond buying, which could mean the return of excessive volatility.

As mentioned, new Chancellor Jeremy Hunt decided to basically reverse all of Prime Minister Liz Truss’s tax cuts that were set out in her government's mini-budget a few weeks ago, as he insisted that it is not right to borrow in order to fund tax cuts. Among the changes announced to the controversial mini-budget, include:

But cuts to stamp duty and National Insurance remain in place.

Will BoE be forced to intervene again?

There is arguably an even larger elephant in the room…

The Bank of England’s temporary bond buying is ended on Friday. What will this mean for borrowing costs, and mortgages… and by extension the pound and FTSE?

With the BoE no longer going to be purchasing long-dated bonds, the potential for yields to rise again means there will be pressure on UK asset prices.

The US dollar meanwhile is also continuing to apply pressure on the GBP/USD, after a stronger CPI report and UoM’s inflation expectations data last week raised calls for more aggressive rate increase from the Fed.

In the UK, the political turmoil and a near 10% inflation rate means consumer and business budgets will continue to get stretched as we head towards the winter months.

The BoE has to keep on hiking interest rates because of the very high inflation rate. This should keep bond prices under pressure and yields underpinned.

UK CPI in focus on Wednesday

After edging back below 10% in August, CPI is likely to have remained elevated in September due to the latest slump in the pound, which has surely boosted the price of imported goods further. If CPI doesn’t come down sharply, the pressure on the BoE will grow even more. Aggressive rate hikes to bring CPI down will only boost bond yields further, raising borrowing costs for the government and households alike.