The GBP/USD was down about 130 pips on the session at the time of writing on Friday afternoon. This comes after under-pressure UK Prime Minister Liz Truss sacked her also-under-pressure Chancellor, Kwasi Kwarteng. There were lots of rumours on Thursday that this would happen, which saw the cable and FTSE stage a relief rally. But now that the news has been confirmed, the GBP/USD has reacted in a very typical way: down. In other words, it was a case of buy the rumour, sell the news for the cable.

The market will be asking lots of questions. Who is Kwarteng going to be replaced by? What changes will the new Chancellor bring to the mini budget? All these changes and the U-turns within the first month of the new PM Liz Truss’s reign raises serious question marks about her longevity in the job, and even raises the prospects of a general election.

So, in addition to everything else, there is the added political uncertainty hanging over the economy, which is not going to benefit anyone.

But there is arguably an even larger elephant in the room…

The Bank of England’s temporary bond buying is going to end today. What will this mean for borrowing costs, and mortgages… and by extension the pound and FTSE? In short, lots of uncertainty, which means more downward pressure.

BoE, what you gonna do?

As mentioned, the Bank of England’s temporary bond buying is going to end Friday. We are already seeing renewed selling of the pound while the FTSE has started to come off its highs after rallying sharply on Thursday, in reaction to the news of Kwarteng’s sacking.

With the BoE no longer going to be purchasing long-dated bonds, will we see yields start to head higher again?

The US dollar is continued to apply pressure on the GBP/USD, after a stronger CPI report raised expectations for more rate aggressive rate increase from the Fed.

In the UK, the political turmoil and a near 10% inflation rate means consumer and business budgets will continue to get stretched as we head towards the winter months.

Unless the new Chancellor cuts back on the government’s expected spending plans sharply, there is a risk that bond yields will rise further.

In any event, don’t expect yields to go down sharply and soon. The BoE has to keep on hiking interest rates because of the very high inflation rate. This should keep bond prices under pressure and yields underpinned.

UK CPI in focus on Wednesday

After edging back below 10% in August, CPI is likely to have remained elevated in September due to the latest slump in the pound, which has surely boosted the price of imported goods further. If CPI doesn’t come down sharply, the pressure on the BoE will grow even more. Aggressive rate hikes to bring CPI down will only boost bond yields further, raising borrowing costs for the government and households alike.

What does it all mean for GBP?

Well, you can argue that much of the risks to the UK economy has already been priced in. But the political and economic situation keeps on going from bad to worse. Yields could rise alarmingly again if CPI beats and the BoE refuses to step in again to depress rising borrowing costs. Against this backdrop, the path of least resistance remains to the downside for GBP/USD. 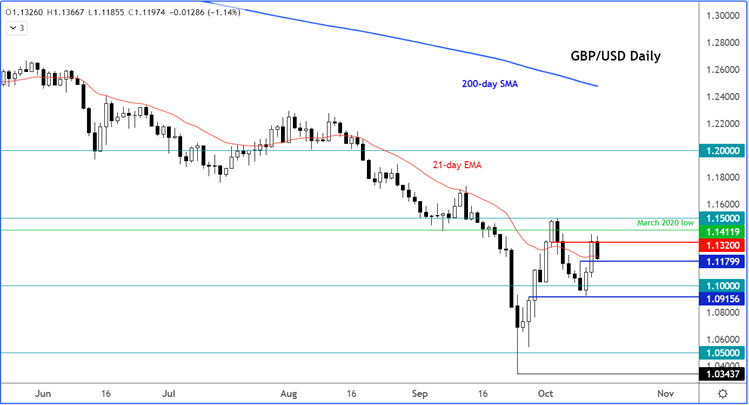