By :
Fawad Razaqzada
,  Market Analyst
The global stock markets remain under pressure as investors await the Federal Reserve’s much-anticipated interest rate decision today, keep a close eye on the energy crisis in Europe, and weigh other risks including a slowing Chinese and global economies. That being said, some of Europe’s major indices such as the FTSE have managed to rebound. I however think that the path of least resistance is to the downside and the selling pressure will likely resume amid a bearish macro-outlook.

Today’s slightly firmer tone, albeit in an overall bearish environment, is a reflection of government support for companies and households crippled by the ongoing energy crises. In the UK, for example, gas and electricity bills for domestic businesses will be cut by around half their predicted level for 6 months. The new government support package comes after ministers announced a £150bn plan to help households with their energy bills for two years. While this is clearly good news, there is no information about how much the business energy package will cost the taxpayer.

Already, the UK is buried in a huge debt pile after spending heavily during lockdowns. In August, the UK government borrowed more than expected, with public sector net borrowing rising to £11.8 billion. Worrying, the cost of servicing that debt rose to a record level. To give you an idea of how costly the government borrowing has become, interest payments reached £8.2 billion in August, up a huge £1.5 billion from the same period a year ago.

Thus, while the government spending might help alleviate the immediate concerns, the longer-term outlook remains murky at best, with several quarters of negative growth upon us and interest rates set to rise further. Faced with double-digit inflation and a struggling economy, the Bank of England is in a very tricky position. It has hiked rates six times already, with the latest increase being 50bps to 1.75% at its August 2022 meeting. Analysts expect another 0.5% increase to 2.25% on Thursday, but there is an outside chance for a 0.75% hike.

The immediate focus is going to be on the Federal Reserve rate decision tonight. The Fed has been tightening its monetary policy aggressively to bring inflation under control and this has seen bond yields and the dollar rise sharply. Most analysts think the decision will be a third 75-basis point rate hike today. If it is anything higher, risk assets could get annihilated by the bears. Even if it is the expected 75 basis point hike, the Fed is likely to maintain a hawkish tone anyway as inflation is nowhere near low enough for the central bank to ease its aggressive stance. For that reason, we are unlikely to see a major recovery in the global stock markets today.

In Europe, the energy crisis is continuing to weigh heavily on the Eurozone economy. Russian President Putin has today said that military reservists are to be sent to Ukraine as part of a "partial mobilisation" of his forces to ensure Russian territorial integrity. The latest move is a step up in Russian aggression which doesn’t bode well for Europe given the situation regarding gas supplies. With Russia reinforcing its military operation in Ukraine, the war looks like will drag on unfortunately, which may mean a long cold winter for the rest of Europe dependant on Russian energy.

On top of all this, you have a slowing Chinese economy, held back by the government’s zero covid policy and global economic weakness amid surging price pressures.

So, the macro situation remains far from being ideal for equities, which should see the FTSE and other global indices continue to struggle and run into strong headwinds after small recoveries. The UK index has bounced off its trend line support again, but the lower highs as well as the breakdown in other global indices, bode ill for the UK index. I reckon a break below the trend line is a matter of time. If that happens, we may well see a revisit of 7,000 and possibly lower levels over time. 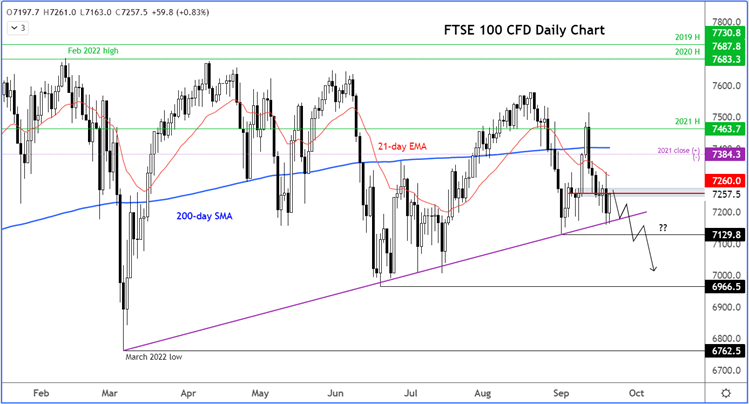