What are traders expecting from the Fed meeting? 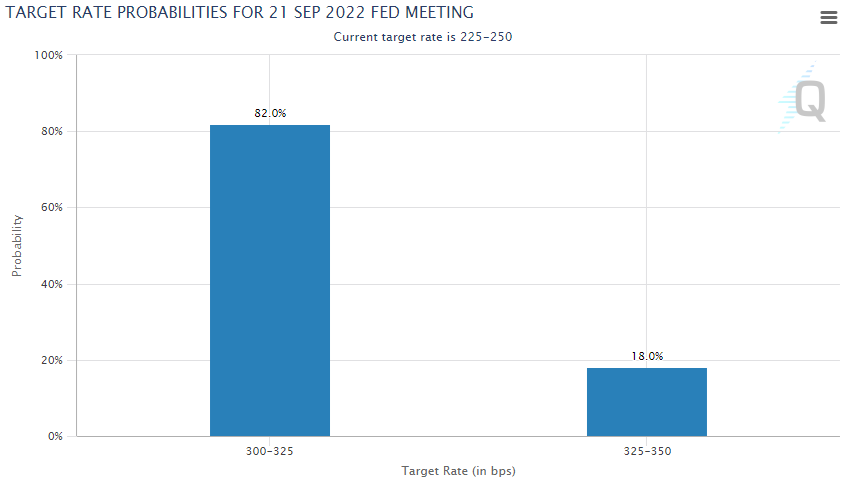 It seems like a lifetime ago, but at this time last month, traders were thinking the Fed was more likely to raise interest rates by just 50bps (0.50%) in its September monetary policy meeting. However, after a hawkish address from Fed Chairman Powell at Jackson Hole, another solid NFP report, and a much hotter-than-expected CPI report, the market has completely thrown out any possibility of a mere 50bps rate hike and even started to price in an outside chance of a full 100bps (1.00%) rise.

In our view, the possibility of a 100bps rate hike is overblown. Lost amongst traders’ handwringing over the Fed’s clear focus on defeating inflation and the hotter-than-anticipated CPI reading is the fact that inflation is still declining relatively sharply. After all, the year-over-year CPI inflation rate has fallen from 9.1% to 8.5% to 8.3% over the last two months.

While the Fed would certainly have preferred to see a rate closer to 8.0% last month, other measures of inflation are clearly falling rapidly, suggesting that the hotter-than-expected CPI reading may be a one-off outlier. For example, the recently-released New York Fed survey showed that 1-year inflation expectations fell to 5.7% (from 6.2%) previously, and the survey’s average 3-year expectation for inflation fell from 3.2% to 2.8%, within shouting distance of the Fed’s long-term target near 2%. In other words, there is no evidence that we are entering a self-fulfilling cycle of rising prices; if anything, the evidence suggests that consumers and businesses expect price pressures to keep dropping in the coming quarters.

Instead of pointing to a 100bps rate hike this month, the stubborn inflation readings of late suggest that the central bank may be forced to raise interest rates for longer, perhaps into the first half of 2023, rather than pausing the current tightening cycle at the end of this year. A month ago, traders were pricing the peak interest rate for this cycle around 4.00% in January; now the market expects rates to peak closer to 4.50-4.75% in Q2 2023.

Notably, this meeting will provide an updated Summary of Economic Projections (SEP), including the infamous “dot plot” of Fed members’ interest rate expectations. Traders will be keen to see when and where Federal Reserve policymakers see this tightening cycle coming to an end. Finally, the central bank is still ramping up its Quantitative Tightening (QT) program to wind down its balance sheet, so any comments around how Jerome Powell and Company see that developing could move markets as well.

Going long the US dollar remains the most obvious trade in the FX market (though that doesn’t necessarily means it will work out!). Not surprisingly, the US dollar index continues to find support at its rising 50-day EMA, keeping the bias in favor of the bulls. As of writing, the index is testing the 78.6% Fibonacci retracement of its big 2001-2008 fall near 110.25, but if the Fed comes off as more hawkish than anticipated, a break and close above that area could target 112.00 or higher heading into October:

European Open: Flash PMIs and US inflation on tap
By:
Matt Simpson

Inflation Is the Solution: The Wisdom to Accept What We Should Not Change
By:
Global Author