The FOMC statement was seen as dovish as a result of the wording that “in determining the pace of rate hikes, we will consider cumulative tightening, policy lags, and economic and financial developments”. However, the markets reversed quickly during the hawkish Powell press conference that followed as he noted that:

And with that, US stock indices moved lower, while US yields and the US Dollar moved higher.

For a complete recap of the FOMC meeting, click here.

The Bank of England painted a completely different picture for the British economy and the meeting was taken as dovish.  The Bank of England statement noted that it sees a 2-year recession if rates follow the market curve.  In addition, the statement said that peak interest rates will likely be lower than implied by the markets.  The committee did lower its inflation forecasts.  However, BOE Governor Bailey said “that the MPC judges that risks to inflation projections are to the upside.

As a result of the BOE meeting, the FTSE 100 moved higher, while the Pound moved lower.

For a complete recap of the BOE meeting, click here.

As a result of opposite views of their respective economies by the Fed and the BOE, GBP/USD has moved aggressively lower.  GBP/USD broke below 1.3000 on April 22nd and has been moving lower in an orderly channel.  However, on September 21st, the pair broke below the bottom trendline of the channel near 1.1350 and sold off to a low of 1.0357 on September 26th.  After the BOE bought Gilts in the market to save the economy, GBP/USD moved higher, back into the channel, in an ascending wedge formation to a high of 1.1645.  However, the pair broke down below the wedge yesterday, as the hawkish FOMC led to a bid in the US Dollar.  After the dovish BOE meeting, the pair continued lower through the 50 Day Moving Average and found support at the 38.2% Fibonacci retracement level from the lows of September 26th to the highs of October 27th, near 1.1153. 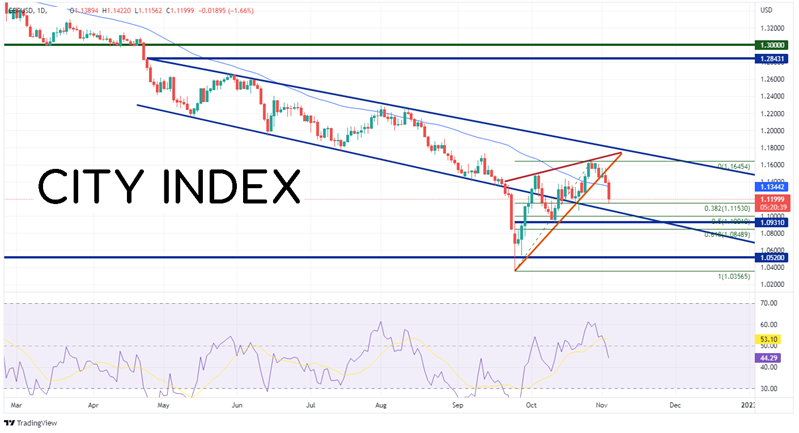 If GBP/USD does continue to move below the 38.2% Fibonacci retracement level, the next level of support is the bottom trendline of the longer-term channel near 1.0775, then the 50% retracement level from the above-mentioned timeframe near 1.1001.  Below there is horizontal support dating to September 26th at 1.0931.  However, notice that the RSI is in oversold territory on the 240-minute timeframe and turning higher.  This indicates that the pair may correct before resuming its downward trend. The first level of resistance is at the November 2nd highs and the bottom trendline of the ascending wedge near 1.1386.  Above there, price can move to the highs from October 27th at 1.1645 then the top trendline of the wedge at 1.1715. 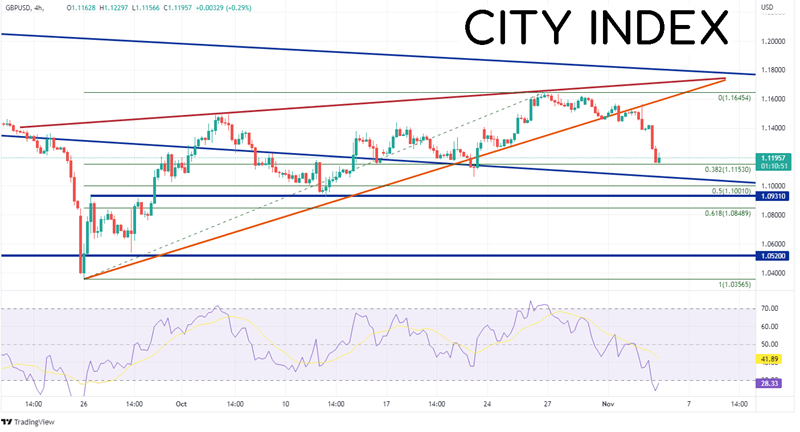 GBP/USD is already down roughly 400 pips from Thursday’s high.  Can it move lower?  With a hawkish FOMC and a dovish BOE, it sure seems possible.  Near-term, watch Friday’s Non-Farm Payroll print.  If the print is weaker than the expectation of +200,000, traders could sell the US Dollar and buy stocks (bad news is good), as it would mean the Fed now has to worry about a slower jobs market when making a rate hike decision at its next interest rate meeting.