European Open: The DAX could retrace further from its ‘bull market’ threshold

Australia’s employment report was as strong as ever, which simply retains the RBA’s confidence in their ‘tight labour market’ and the need to slow down their pace of tightening. Australia’s unemployment level fell back to its 48-year low of 3.4%, 32.2k jobs were added to beat the 15k expected, with 47.1k full jobs eroding the impact of a negative PT print. And whilst wage prices may have come in slightly above expectations yesterday, at 3.1% it remains well below their headline inflation rate.

The Republican party has officially won the House of Representatives with a majority of 218 against the Democrat’s 211. Yet with the Dems holding the Senate, it basically means both parties will have a tougher time getting their policies over the line. So that makes for a less exciting political landscape as we head into new year, although Wall Street may like the fact that the Dem’s cannot roll out inflationary policies as easily as they once could.

Trussonomics to be officially buried today

The UK’s Finance Minister Jeremey Hunt is expected to bury former PM Liz Truss’s budget and unveil his own today. The £54 billion package is a classic combination of tax hikes and spending cuts, $32 of which was unveiled last month which leaves the $24 today. There’s never a good time to release such a budget, but the fact it arrives just one day after inflation was officially recorded at over 11% surely makes it worse. The FTSE and GBP pairs are therefore vulnerable to pockets of volatility, should the budget be more painful than already expected (which is more likely than it not being as bad as feared).

The DAX entered a technical bull market on Tuesday by closing just over 20% higher from its September low. I have lost count the amount of times I have seen a market pull back from the 20% threshold (which is based on no logic that I can see, other than being a nice round number) – so that is just the first clue that the DAX could pull back further. 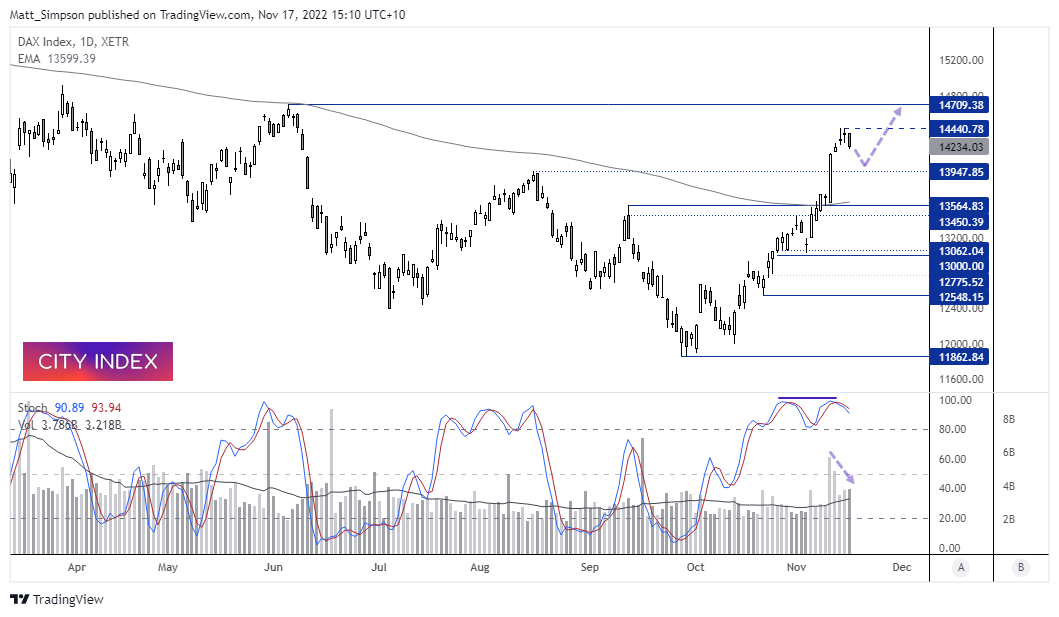 But we also saw two Doji candles leading into the high, prices were rising on lower volume, and a bearish divergence has formed on the stochastic oscillator. Therefore, the bias is for a retracement towards the 14,000 area whilst prices remains beneath 14,440. At which point we can re-evaluate its potential for a move up to the 14,709 high. A break above this week’s high assumes bullish continuation.

Economic events up next (Times in GMT) 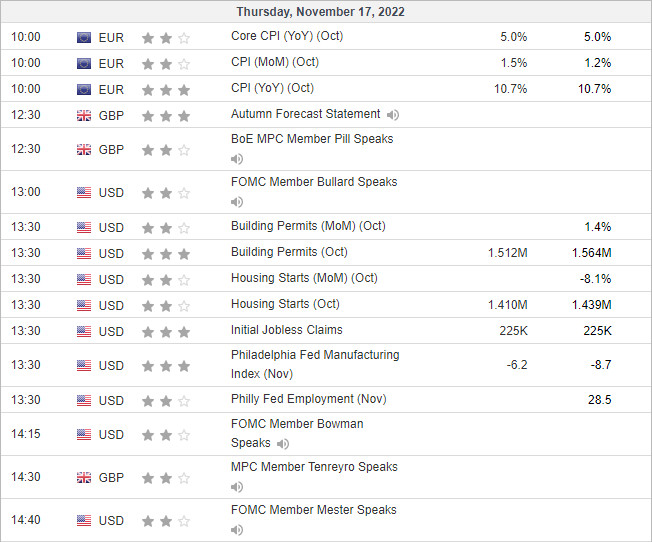