Sentiment for equity investors remained negative last week as headlines continued to pour out of Ukraine and the Fed vowed to raise rates at the March meeting, despite the rise of geopolitical risks. But it was European stock markets which took the largest hit with the DAX, CAC and STOXX 50 indices falling over -10%, during their worst week since the pandemic in March 2020. Europe’s close proximity to Ukraine has left investors in the region nervous, with reports if a fire breaking out at Ukraine’s largest nuclear facility on Friday only adding to their concerns.

Putin has since likened Western sanctions against Russia akin to “an act of war”, after previously threatening to use nuclear warheads should the West “intervene” with Ukraine, and has also put this nuclear team on “high alert”. So far, the US and Europe have removed some Russian banks from the SWIFT payment system, ceased all transactions with Russia Central Bank and targeted assets of Russia oligarchs. But news that the US and Europe are seriously considering banning oil and natural gas imports from Russia over the weekend has seen markets gap lower, WTI rise above $130 and gold rise to $2000 for the first time since August 2020. And with Russia refusing to remove troops until Ukraine give into Putin’s demand and soldiers reportedly gathering to attack Kyiv, it appears unlikely the invasion will cease any time soon and will be a key driver for markets this week as well.

We highlighted the potential for a bearish reversal pattern three weeks ago, which was confirmed with a break beneath 14,816 and projected a target at 13,003. Whilst prices stopped just shy of they target, futures are trading lower so the cash market is expected to open lower today. It also closed the week beneath the 200-week eMA for the first time since October.

Also note that volumes are rising and at their highest level since the pandemic. As prices are falling with rising trading activity, it suggests initiative selling is driving prices as opposed to simply bulls closing out their positions. A break below 13k brings 12k and 12,260 (50% ratio) into focus, nut with volatility likely to remain elevated and no signs of a resolution in Ukraine, a move to 11,450 also appears viable. 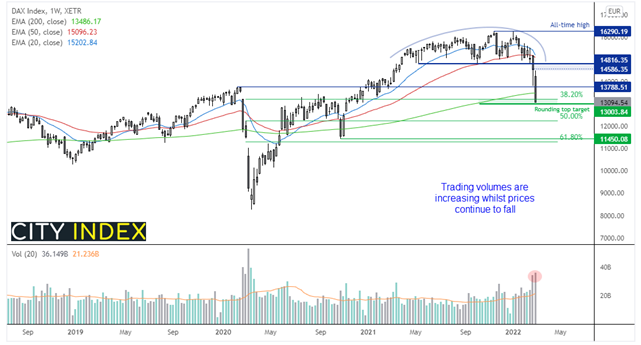 US markets are holding up (relatively well)

Compared to the sell-off in Europe, Wall Street is holding up relatively well. Last week’s range was less than half the prior week, and a bullish pinbar formed two weeks ago. However, futures markets are around -2% lower so the cash markets are currently on track for a gap lower. If prices ca hold above 4200 then we think there’s the potential for a minor bounce, although we would only switch to a bullish bias with a break above last week’s high (and that would need to be confirmed with above average volume). We therefore have a neutral bias on the S&P 500 because downside volatility is greater in Europe, whilst on the S&P 500 volatility subsided and it also has a bullish reversal candle. 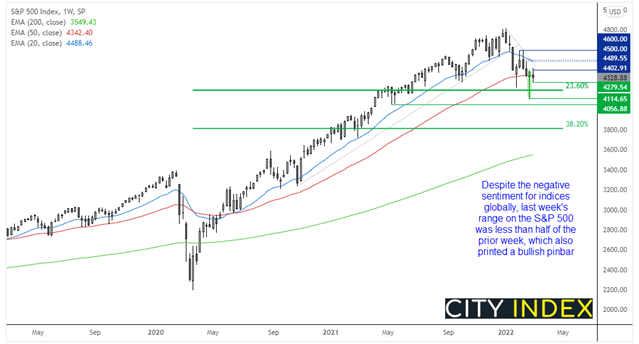 Traders remained net-short Nikkei futures for an eight consecutive week according to the weekly COT report (Commitment of Traders), with net-short exposure rising by 1.6k contracts. And from a separate report, foreign investors were net sellers of Japan’s stock and bonds markets. 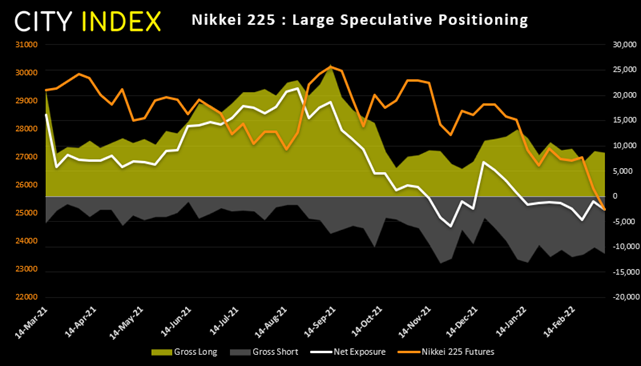 The Nikkei has gaped lower today as it tracks global sentient, which has been shaken by the events unfolding in Ukraine. It now trades just 2% above the bearish triangle target, which sits at 24,528 and appears plausible the level could be reached this week. However, support has been found at 25,000 and the 200-week EMA sits at 24,737 which make them viable support levels over the near-term. Out bias for the week remains bearish whilst prices remain beneath last week’s low of 25,775, so we would also consider fading into minor rallies below that level.