The Bank of Japan left rates unchanged at -0.1% and will continue with its monetary stimulus by targeting 0% on its 10-year bond yields.  In addition, the BOJ revised down its economic outlook, after recently revising it higher!  This is in stark contrast with its counterparts in the US and UK, the Fed and the BOE, which raised rates by 25bps each.  One of the reasons for the downgrade was due to the continued impact of the coronavirus on the economy.  However, the other main reason was due to concerns about commodity prices, particularly oil.  Japan is a major importer of oil and higher prices could cause growth to slow and rates to remain low or “go even lower”.  BOJ Governor Kuroda said that “the biggest impact on Japan’s economy from the Ukraine crisis is through rising raw material costs”.

Prior to the meeting, Japan released CPI data for February.  The headline print was 0.9% YoY vs 0.7% YoY expected and 0.5% YoY in January.  However, most of the inflation was due to the rise in energy prices, as the CPI Ex-Food and Energy was -1% YoY vs an expectation of -0.9% YoY and a -1.1% YoY print in January. Kuroda stated that he could see (headline) inflation around 2% sometime in April.

USD/JPY has been moving higher in an orderly channel since making a low on January 5th, 2021 near 102.59.  On October 11th, 2021, the pair broke aggressively higher as it broke through the February 2020 highs near 112.22 and it hasn’t looked back.  More recently, USD/JPY broke out of a rising triangle at 116.35, the top trendline of the long-term channel near 118.00, and highs from December 2016. Resistance above sits at the psychological round number resistance of 120.00, and horizontal levels at 120.43 and 121.68.  However, notice the RSI is in overbought territory, an indication the pair may be ready for a pullback. 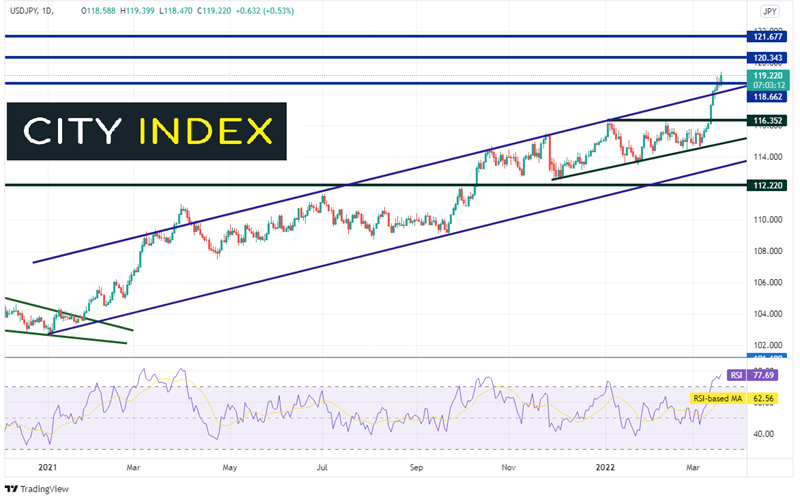 On a 240-minute timeframe, USD/JPY has been moving once again in an orderly upward sloping channel since March 15th.  However, as with the daily timeframe, notice the RSI is overbought and diverging with price.  This formation of 3 higher highs in price and 3 lower highs in the RSI is an even stronger signal that price may be ready for a pullback.  First support is at the confluence of the bottom trendline of the channel and the recent new high breakout level at 118.66.  Below there, price can fall to the March 15th lows at 117.70 and horizontal support at 116.37. 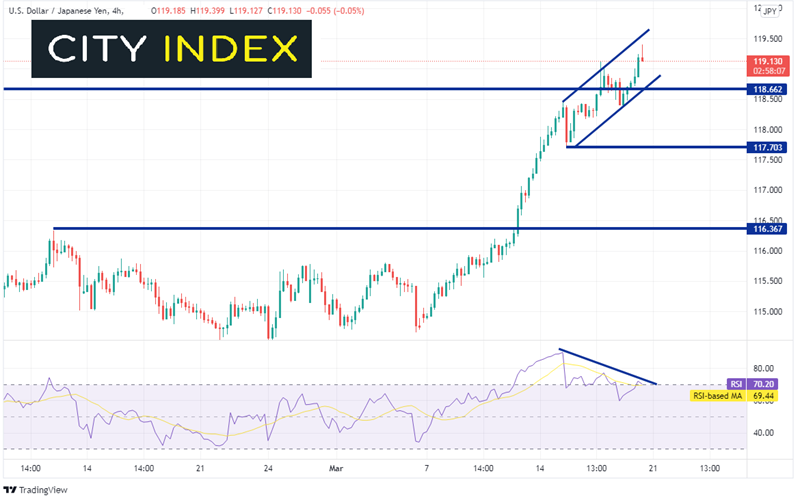 With a dovish BOJ and the possibility of inflation only reaching 2% in April, USD/JPY is on the rise.  Remember, the US seeing inflation near 8% and is in hiking mode.  However, there is always the possibility of the Yen returning as a flight to safety if the Russia/Ukraine war picks up steam.  Also watch the RSI, which is currently indicating the possibility of a near term pullback.